Banjo versus TV week 123: Deniece and Denephew at First Friday

A check-in on the Banjo versus TV project — J.R.'s ongoing plan to spend more time on his banjo than on TV. This post covers 7/4/2010 through 7/10/2010. J.R. has fallen way behind in his banjo blogging and has this many weeks to catch up for: 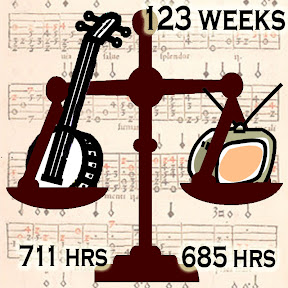 First Friday at the Old Town School of Folk Music is all about community playing, singing and dancing. This week I had a terrific time because I brought along the best thing you can bring to First Friday: kids!

I borrowed Deniece and Denephew for the evening and they played ukuleles that they'd just received a few days prior at Denephew's birthday. Deniece also played the violin that she's been practicing for a few years. 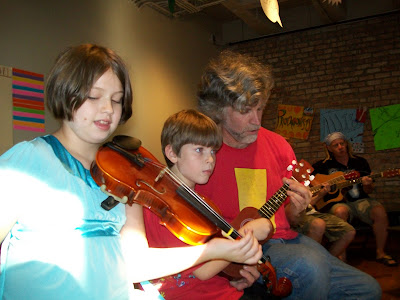 We played along with the Song Circle group through a whole bunch of songs. I helped Denephew out with the chords, but he did all the strumming. When their turn came they got up in front of the group and lead everybody in song. They both did a great job with their solos.

I was so proud of them both. I think this was the first time Deniece had participated in a song circle and she blended in very well. And how cool is it that Denephew played a solo on a ukulele that he'd only had for a few days?

Special thanks to session leaders Jason McInnes and Maria McCullough, who are both so good with kids.


Be the first to comment on “Banjo versus TV week 123: Deniece and Denephew at First Friday”