Posted by jrjenks on Thursday, September 3, 2009 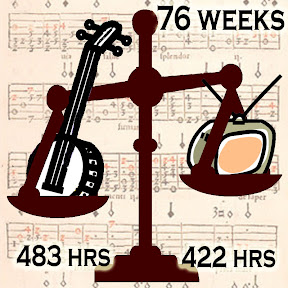 You'll recall how my friend Warren and I had the best weekend ever seeing the Scruggs band perform in Warren's home state of Colorado a few weeks back. Well, we realized at the time that Earl and friends would be performing in Michigan which, although it's not Chicago, is nonetheless my part of the country. So we made arrangements to meet up and see the band again at Frederik Meijer Gardens and Sculpture Park.

The evening kicked off with opening act Green Sky Bluegrass, a jamming kind of bluegrass group from Michigan. But the real draw, of course, was Earl Scruggs.

The redhead had told me that my pictures of Earl from Colorado didn't capture his happiness, so I tried to pay a little more attention to the timing of the shots. I hope you can see that Earl is happy to be on the stage, 'cause that's how it came across. Speaking of happy, it was fiddler Hoot Hester's birthday so the band gave him a cake and we all wished him a happy birthday. After the performance I got a chance to go backstage with Warren and say hello to the band. They remembered me, which was nice. 'Tis sweet to be remembered, you know.


Be the first to comment on “Banjo versus TV week 76: Earl again. Also, peaches with maple syrup.”

'A Different Kind of Dirt' 4 min