Please note this is an archived topic, so it is locked and unable to be replied to. You may, however, start a new topic and refer to this topic with a link: http://www.banjohangout.org/archive/372876

The tune(s) of the week for Friday, February 19, 2021 were both played by Lee Sexton, who died at the ripe old age of 93 on February 10, 2021 in Letcher County, Kentucky.  He learned to play on a home made banjo with a groundhog skin head at age 7.  His uncle Morgan Sexton was a banjo player too; his cousin was Roscoe Holcomb.

Style is a function of our limitations; in his case, it was dictated by an industrial accident that mangled his right hand middle finger, which forced him to develop his own completely unique 2 finger style of banjo playing.

The two tunes I’ve written out are both well known: Cumberland Gap and Shady Grove.  Both are in the tuning often used for Cumberland Gap: uncapoed, fDGCD.  It is the same as sawmill tuning with the fifth string down 2 frets, or a whole step. For Shady Grove, this lowered fifth string functions as a melody note and gives it an unusual quality.

Here he is playing Shady Grove: this clip is from the movie “The Search for the Wrong Eyed Jesus”, available only on DVD:

If you look, there are several other videos about him out there as well.

My tab for Cumberland Gap is here:

Here I am playing this tune:

My tab for Shady Grove:

Here I am playing Shady Grove with words I have crafted myself.  Verse 1 is from “Swing and Turn Jubilee”; verses 2-4 I wrote.

I first heard Lee Sexton when I was in college at UC Riverside, California in the 1970s; to avoid studying in the library I would take long breaks in the music room and listen to the LPs on the headphones.  They just happened to have a 2 LP version of the Folkways recording “Mountain Music in Kentucky”, which features a lot of music that I have been pursuing ever since.  This set was recording in 1959 by John Cohen, and also features an ethereal and transcendent acapella “lined out” version of Amazing Grace as sung by the Old Regular Baptists.   On this recording, Lee Sexton plays this tune, which they called “St Louis Blues”, but on later recordings he called it “Lee Boy Blues”:

St Louis Blues is done 2 finger style; some of the licks on it are familiar to bluegrass players. Do find this recording, there is also some great banjo  playing by others too.

This recording is here:

Lee Sexton has two additional two recordings: Whoa Mule on June Appal records seems to be sold out on CD but can be downloaded here:

This one is by the Field Recorders project is available on CD and as a download:

His uncle Morgan Sexton was also a well known 2 finger style banjo player; he has a recording here:

juneappalrecordings.bandcamp.c...rock-dust.  June Appal used to sell a CD with a different recording, Shady Grove; they now seem to have it only on cassette.  I believe the two recordings have a lot of overlap.

Great tunes of the week.never heard of Lee sexton before you posted this but just listened to the Bandcamp album in full and itâs wonderful. Time to find time to have a go at 2 fingsr

I love this style. Thanks so much for presenting it. The video of Morgan Sexton doing Little Birdie is exquisite.
On the Lee video, with some amount of horror, I heard him talk about how his son had urged him to modernize his style. I loved how he vehemently hung on to his OLD way with a death grip!

His style did seem to change; the CD on June Apple is half trailing; the St Louis blues on the Mtn Music of KY LPs seems pretty bluegrass to me.  The bio fact that he mangled in RH middle finger doesn't seem to square much with the dates of his recorded output.

Great tune(s) of the week Andy! Lee Sexton was such an amazing player, thanks for shining the spotlight on his style.

Thank you for an appropriate post to honor a beloved player, Andy. I will study it all, but just thought I'd first copy and paste the words of JD Wilkes from an Instagram post. He describes seeking Lee out and some interesting details about Lee's life.

"This week’s #banjototw is anything in the spirit of the late, great Lee Sexton, who passed away last week at the age of 92. If you need help choosing a tune, I suggest “Cumberland Gap”, “Shady Grove” or one of his originals like “Line Fork Backstep”.

Born in 1928 in Letcher County, KY, Lee Sexton is perhaps best known as the banjo player in the square dance scene of Coal Miner’s Daughter. He was also recorded  in the ‘50s by Smithsonian Folkways and appears in the BBC documentary Searching for the Wrong-Eyed Jesus. As an eastern Kentucky banjo-player whose style pre-dates Bluegrass music--not to mention his aforementioned portfolio of achievements--Mr. Lee loomed large in my mind for years. He was my “Elvis Presley”, so to speak...a man I just had to meet and get a lesson from. But how? I asked around for his contact info, but no one had it. I just wanted to learn from Lee Sexton himself because he WAS the history I was seeking. Nothing else would do.

Then it dawned on me: “What if he’s just in the phone book?” So I called up directory assistance and before long his phone was ringing. “Yello!” came the hoarse shout of the ole Kentucky grandpa, and soon I was chatting leisurely with my hero. He gave me directions to Line Fork and the very next weekend I was off to the Campbell’s Branch schoolhouse. After my years-long wait and seven-hour journey, yours truly was finally sitting in the shadow of the master himself, learning a new batch of tunes. Why, he even let me film some of his famous “two-finger” up-picking style. Sure, it wasn’t the drop-thumb lesson I thought I’d get (turns out he switched to up-picking after getting bit fetching a raccoon out of a trap) but the wit and energy he exuded filled my heart like I knew it would. After jamming with him and some of his friends, I bid them all goodbye and left with enough footage to learn later on repeat.

For those interested in seeing this mini-doc, search “Lee Sexton Demonstrational” on YouTube. Sadly, documentaries are now the only way to see him play, like Line Fork and Morgan Sexton: Bull Creek Banjo Player. Field Recorders Collective FRC 105 “Lee Sexton and Family”. And June Appal records’ many releases like “Whoa Mule”."

JD Wilkes is a very talented musician who still performs. He has a wealth of experience to share. He is also a BHO member and I'll let him know about this thread.

That’s often the way in researching something. You think where do I start? There’s so much stuff out there, like too much or nothing, it’s never in between.. people try birth and death records, marriage certificates when sometimes the common sense approach of checking the phone book or better still asking about in the area the person your after lives. Some ghosts still remain, untraceable people, it’s all fascinating stuff.

I love his idiosyncratic take on Little Maggie - the modal tuning with the 'old-as-the-hills' vocals is very haunting: youtube.com/watch?v=6cC8RjrbrGs

Here's another good story of lost and found...Blind Blake was a ragtime blues guitarist of legendary skill.  He disappeared in the 1930s; Rev. Gary Davis thought he had been hit by a street car.  Here's a story of how someone tracked down his grave...

Here's another good story of lost and found...Blind Blake was a ragtime blues guitarist of legendary skill.  He disappeared in the 1930s; Rev. Gary Davis thought he had been hit by a street car.  Here's a story of how someone tracked down his grave...

What an exciting story!

I see Lee Sexton always playing a (probably 1970s) Gibson tube-and-plate RB-250 Mastertone. There is one for sale right now on the BHO:

Andy, you've chosen an exciting topic this week. I admire your arrangements and original lyrics added to Shady Grove.

I used the recording on the Lee Sexton and Family CD. He played the second part of Shady Grove crooked. He had a way of playing, which I link to many Kentucky old-time players, that added interest by making the timing irregular or unusual and are therefore unique and refreshing. How sad that somebody passes on before we really take notice of him.

I was previously inspired to learn two other tunes. Though he played them 2-finger, I only attempted 2-finger on Shady Grove and clawed the other two. That he learned to play clawhammer as a child is interesting and some of his recordings on Whoa Mule are clawed.

JD Wilkes wrote a blog about Lee on his homepage.  He has recorded some of Lee's more difficult tunes, which would take me a month to learn even one (and then forget!) and filmed Lee demonstrating several tunes, embedded below.  JD Wilkes homepage also has him performing Little Maggie and other tunes.  JD has the honorary title of Colonel from the state of Kentucky, which is why his moniker here is ColonelJD. 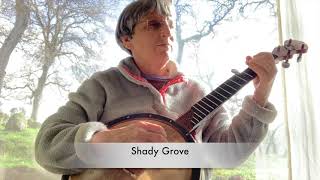 Your choice of TOTW is very appropriate! lee was a very good old-time banjoist with an own style.

As already said, Lee have also tuned down the fifth string to better work as a melody note rather than a drown.

Although I sometime do play two-finger style, I'm too much used to (old-time) three-finger picking when playing this particular tune. I keep making too many mistakes, using only two fingers. So I'll hope you will excuse me for mixing in a third finger from time to timeâ¦ 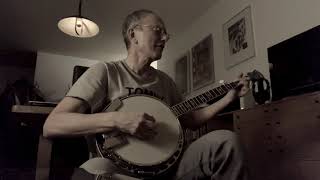 Thanks to uncle clawhammer for the link on the mole post

That’s often the way in researching something. You think where do I start? There’s so much stuff out there, like too much or nothing, it’s never in between.. people try birth and death records, marriage certificates when sometimes the common sense approach of checking the phone book or better still asking about in the area the person your after lives. Some ghosts still remain, untraceable people, it’s all fascinating stuff.

There's a bit of controvery in regards to how the information in this article was obtanined (typical media behaviour), but it's a great read and Mack was an interesting guy to say the least.  Not sure what the state of his research material is in after his death, there are some legendary items he is supposed to be in posssion of, including additional photos of Robert Johnson.  Enjoy the read.  nytimes.com/interactive/2014/0...lues.html

I have read this link in the course of my upcoming tune of the week on Last kind words and included it in my draft. It seems that Mack has collected so much stuff but his filing system if so confusing that even he didnât know where the information heâd researched was. He said he had the info but didnât know where heâd put it but added itâs here somewhere.

'Banjo outside it's comfort zone?' 55 min