Please note this is an archived topic, so it is locked and unable to be replied to. You may, however, start a new topic and refer to this topic with a link: http://www.banjohangout.org/archive/372235

This week’s Tune of the Week is Cousin Sally Brown. The version I’m posting here is the A Minor/Dorian version from the playing of Marcus Martin. There is a different tune sharing that name in D from Gaither Carlton made popular by Doc Watson. So that one can be taken up in the future by someone. There doesn’t seem to be much background information on this tune in either Fiddler’s Companion or its update site Tunearch.

The Marcus Martin recording as seen on Slippery Hill has him playing it flat more like G# Minor or perhaps tuned A=415. It fades out at the end. I don’t have the album version, perhaps that one is longer. Martin plays each part different pretty much every time through. So most people make choices as to what they include as the standard version with perhaps some variations. The B part in particular is typically crooked. Some people play the B part 9 measures the first time through and 8 measures the 2nd time. Rachel Eddy plays it 8 measures both times. In my video and tablature I play 9 measures for each of the B parts.

In the video I am joined remotely by Paul Kirk Jr. on fiddle. 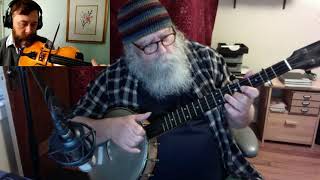 Nice tune and well played, Stephen. I have this tune on a recording, "The Next Small Thing," by the This Big String Band. I look forward to working on this.

Well done! I've always liked this tune. I have a half dozen versions in my iTunes library, about half one version, half the other. I'm looking forward to working on learning this one.

Such a lovely modal tune, Stephen, and so nice of Paul to collaborate with you. Every time you post I know it's going to be a great tune with a great performance by you!

The Marcus Martin CD that came out in 2007 from Library of Congress recordings is worth having.  The liner notes tell us of Marcus' life as a hard-working farmboy in Macon County, North Carolina who later worked at many other jobs into his 80's.  He fiddled at dances when just 16.  He said his father, Rowan, was a smooth fiddler. Cousin Sally Brown was recorded as Sally Brown by a Georgia fiddler in 1925 for the Edison company, but wasn't released.  Martin recorded in 1941.

I hear the enchanting modal sound in the tune and noted it accordingly, though I could have chosen a C# when I chose C in the first measure.  Marcus seems to play in between notes and varies that note to my ear later on in the recording.  As Stephen says, Martin never played it twice through the same way. Have a listen on Slippery Hill. The tuning in my arrangement is called an Am tuning and was an unusual choice. Anita Kermode has it in her extensive tunings list: aCGCE.

Following is Adam Hurt's version.  A shout out to him for introducing me to this resource fiddler of North Carolina.  I recall him asking, "Have you ever heard of Marcus Martin?" as he would ask regarding so many fiddlers I'd never heard of. Thanks Steve, I just heard you and Paul play this neat tune this morning in a rare visit to FB. Well played, and I am biased in favor of Martin tues and all model ones too.

Janet, Thanks for adding the bio stuff as well as adding your lovely version playing it. I had a listen to that yesterday and was enchanted by it.

Lovely plaintive feel to this tune. Lovely playing by both yourself Steven and Janet

Wonderful versions by both Stephen and Janet. Stephen and Paul are so incredibly tight together, not at all easy to do when you are playing remotely over the internet. Janet's great rendition is like a sublime meditation. I've attached my rendition below. The fiddler is my good friend John Maguire. We recorded it exactly one year ago, today, in my living room.

With apologies, I have the wrong tuning label in my post above. In Anita Kermode's list of tunings she calls aCGCE open C with a raised 5th string. I came up with it through trial and error.

Thanks for your kind words, Don. Your duet skillfully and intricately portrays the melody.

Thanks for the kind words Don and the lovely rendition of Cousin Sally Brown you posted.

Stephen
Thanks for posting such a good tune. Your banjo playing goes so well with the Paul's fiddling. Sounds great.

Janet and Don Thanks for your recordings too. So many good players around here.

Another tuning that can work well is aEACE. I use it for Cousin Sally Brown an some other
A minor tunes.

Wow, such a great TOTW and some great versions! Well done Stephen!

Wonderful versions by both Stephen and Janet. Stephen and Paul are so incredibly tight together, not at all easy to do when you are playing remotely over the internet. Janet's great rendition is like a sublime meditation. I've attached my rendition below. The fiddler is my good friend John Maguire. We recorded it exactly one year ago, today, in my living room.

WOW!  This is absolutely fantastic Don!!!  Really enjoyed it!

WOW!  This is absolutely fantastic Don!!!  Really enjoyed it!

Thanks, RG, I very much appreciate it!

'Banjo outside it's comfort zone?' 12 min