Please note this is an archived topic, so it is locked and unable to be replied to. You may, however, start a new topic and refer to this topic with a link: http://www.banjohangout.org/archive/366005

This week’s TOTW is “Freda” an old-time tune originally from Kenny Baker, however, I will be presenting Carthy Sisco’s version.

Carthy was a long-time fixture in the Old-Time community here in the Pacific Northwest.

He was born in 1921 in Carroll County, Arkansas. His father was a banjo player which influenced him to pick up the instrument at the age of seven. He became frustrated with the limitations of the banjo and switched to the fiddle early in his teens.

At the age of 16 he joined the Civilian Conservation Corps where he met some like-minded musicians helping him to refine his playing skills.

Soon after, he moved to Sedro-Wooley, WA to stay with his aunt. While there he signed up for Boeing’s vocational education program and was hired at the Naval Shipyard in Bremerton, WA. He worked there for 37 years. He put away the fiddle while working and raising children.

In the early 70’s he broke out the fiddle again and joined the Washington Old-Time Fiddlers Association. He developed his own style of playing and was known for putting new life into old tunes. Locals called it “Carthyizing.” One of his favorite fiddlers was Kenny Baker. Sisco’s versions of Kenny’s tunes, though similar, are often difficult to recognize.

I was recently introduced to “Freda” (listed as “Frieda” in the Tractor Tavern Book ) by Seattle fiddler Josh Larios. Josh runs a local Seattle jam called “The Slower Than Dirt” Jam. You can listen here to Josh and Cameron Dewhitt playing on one of Cameron’s “Get Up In The Cool” podcasts. The podcast is an hour long, but it’s the first tune played.

By the way, if you haven't been to Cameron's site, you'll find it an exhaustive source of information, interviews and great tunes: Get Up in the Cool

Here is a banjo version and tab: 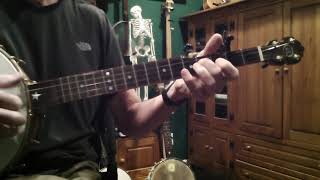 Great tune of the week with plenty of interesting information. The tune has a Morris dance or Welsh country dance feel to it, love it!

Always a treat for you to choose and play a tune, Pat. An interesting life story of Carthy Sisco, making cornstalk fiddles as a young boy, showing a keen musical interest. Then working to support his family before returning to his beloved fiddle. I couldn't find if he is still alive at 99 years old. I found a sound bite on the Slower than Dirt Jam site to arrange the tune, which is similar to your version, Pat. Then I thought I'd try Kenny Baker's. My, it's complex! I took some ideas from it which are included in the first half of the A part.

JanetB Thanks for your post, Janet. I always look forward to your interpretations of tunes. I'm almost positive Carthy has passed on, but was unable to find an obit or other documentation in print. I never had the opportunity to meet him, but I was in a jam once where I was introduced to several of his tunes. I definitely recommend his "Rugged Road" album.

Iâm working on your tab Pat but it takes me ages to get a tune down. Iâd struggle learning 12 new tunes a year, never mind 52!

Good tune Pat, it's on my list to learn. Thanks for the background info. Though Kenny Baker was a marvelous fiddler, I much prefer Carthy's version of this tune.

'Flathead ring for a conversation from TB1?' 3 hrs