Please note this is an archived topic, so it is locked and unable to be replied to. You may, however, start a new topic and refer to this topic with a link: http://www.banjohangout.org/archive/365704

“He was a long, lanky man who seemed mostly knees and elbows as he played at home, at church, and at community functions.”

Henry Lee Hudson was born in Clarke County, Alabama in 1907, and died in 1996 at the age of 89 years. He was of that generation that linked nineteenth-century fiddling to the music we enjoy and play today. Those who have been fortunate enough to meet, to talk with, and to listen to their music in person might be able to feel the span of those years draw up and pull close. It might almost feel like you can touch those earlier fiddlers, whose stories have been mostly forgotten.

Joyce Cauthen knew Henry and wrote about him.

“I found his style and knowledge reached much further back than the ‘30s…‘Cross tuning’ had died out among most fiddlers by the 1930s, but Mr. Hudson continued to play tunes just as he learned them from his father, Joseph W. Hudson, born in 1860.

“I had read in 19th century Clarke County newspapers of one Gus Rhodes, Thomasville's ‘master violinist’ who played at all the fancy balls in the area… Mr. Hudson recalled him [Gus Rhodes] vividly and told me he was a black fiddler… Here at last was a link to the rich tradition of black fiddlers that had flourished throughout 19th century Alabama, but had died out by the 1930s. Today, few people know or remember any black fiddlers, but fiddle scholars give them credit for adding elements to Irish and Anglo fiddle styles that created a southern style of fiddling distinctive from that of other regions of the nation. Mr. Hudson definitely played in that style, with its emphasis on strong, rhythmic bowing instead of fine and fancy noting.”

It grabbed me right away, and I was compelled to learn it on the banjo. There wasn’t much information about the tune or where it came from, just a name: Henry Lee Hudson. Later, I was able to find one more recording of the tune on Old Time band, Red Mountain White Trash’s CD, “Chickens Don’t Roost Too High,” which featured two fiddles playing parts.

When I began my research, I found that Joyce Cauthen is the banjo player in that band (her husband is the fiddle player), and that she had gotten the tune from Henry. So it seems to me that, just like Henry Reed, Henry Lee Hudson has given us a gift of music, unique from just one person.

To hear how the banjo might accompany the fiddler on Messenger, see Joyce and Jim’s YouTube video.

And then, I found a newly posted YouTube video (still image only) of Henry playing Messenger!

It had just been uploaded by someone named Blake Hudson, who I found out was Henry’s grandson. I was able contact him, and he gave me the stories and history of this generous, hardworking, talented musician that brought Henry Lee Hudson to life for me.

Henry was born into a musical family. His father and uncles played music together, and Henry and his siblings continued the tradition of playing for dances and audiences with their string band. (And the tradition carries on—30 of his grandkids also play music) Blake related this fun story: One day, Henry and his brothers drove down to a Texas border town to visit some family. They decided to cross down into Mexico and visit a cantina, of course with all their instruments loaded up! The Mariachi band playing there took a break, and Henry and his brothers jumped up on stage with their instruments and took it from there. When the Mariachis wanted their stage back, the audience wouldn’t let them. They wanted this new band to continue playing!

Blake told me that his grandfather had a glass eye. This is how it came about:

Their string band played in some pretty rough places sometimes. One night, a fight broke out. He was not the sort to want to get into a fight, but when a ruffian aimed a glass bottle at Henry’s friend, he dived in between them, and got a broken bottle in the face!

Henry was employed at a sawmill, and he had to mostly put his fiddle away while he worked to support his family of a wife and six children. At about 60 years old, he picked it back up and began fiddling regularly again. Blake remembers that when he got to playing, it was sometimes hard to get him off the stage. He had a great sense of music, and learned his tunes all by ear. Sometimes when a guitar accompanist wasn’t quite in tune, in the middle of a song, he would just reach down and turn those guitar tuners until it was just right.

Some of his other favorite tunes were Black Mountain Rag, Arkansas Traveler (with the jokes included!) and Orange Blossom Special (the Johnny Cash version). He played his father’s tunes, Natchez Under the Hill, Forked Deer, and Leather Breeches. Blake remembers his grandfather especially liking the Jim Reeves song, “Put Your Sweet Lips a Little Closer to the Phone.” Blake Hudson holds special memories of his grandfather playing “Silent Night” at Christmas, and “Pop Goes the Weasel,” with the plucked string, just for him.

If you are able to, listen to Messenger from Henry’s recording. It is also available on this compilation of Alabama old time fiddlers here:

Blake says that if you listen to it with a good bass speaker, you’ll hear a rhythmic thumping. That is his foot, beating the wooden floor of his Sears and Roebuck (no running water) modular house.

Henry played the fiddle from the age of 12 yrs until a few months before he died at the age of 89.

My mother was reminiscing once about a dear musician friend, Tom Caffrey. She said, “When I’m gone, along with his other remaining friends, he’ll be forgotten.”

I said, “No, because you’ve told me, and I’ll share those stories about him to others.”

We need to pass those stories on. The music doesn’t exist alone, like a stalk. It’s part of tree, branches that connect to each other, and to roots.

Those musicians must not be forgotten.

Below  is my mp3 recording of “Messenger.

Here is a good tab of “Messenger” to start with. stringband.mossyroof.com/Messenger.png 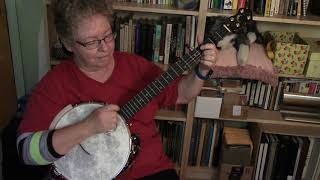 This is a fantastic post--absolute model of musicological and oral history--thank you!

Brilliant history and research into the tunes background and the life of the fiddler that stirred your soul. I love your banjo rendition of the tune and look forward to having a go at it.

Thanks for sharing this inspiring tune and story of a fiddler, Carolyn.  Your research and discovery and music is why I enjoy TOTW so much.  It's interesting that both Henry Lee Hudson and James Bryan are both from Alabama, though not close to each other.  James learned it from fiddler Jim Cauthen, another Alabaman you've linked here.

You introduced me to James Bryan's music quite a while back and every time we discover another of his greatly fiddled tunes it's still as exciting.  Messenger sounds so much like something he would have chosen to learn.  When I play it I get the sense of somebody proclaiming a message (the higher A part) and then explaining it (the more subdued, but important, B part).

I confess having a headstart on this tune (an advantage of coordinating TOTW), so I'm ready to share my new recording and tab.

That was lovely Janet, and your tabs are so so useful as it would have taken me weeks to work that tune out myself. I love this tune of the week as it brings to life the old recordings and sketchy in-inspiring dots on a sheet of paper to life

quote:Originally posted by JanetBThanks for sharing this inspiring tune and story of a fiddler, Carolyn. Your research and discovery and music is why I enjoy TOTW so much. It's interesting that both Henry Lee Hudson and James Bryan are both from Alabama, though not close to each other. James learned it from fiddler Jim Cauthen, another Alabaman you've linked

JanetB
The liner notes from Possum up a Gum Stump say that Jim Cauthen is playing the first fiddle on the tune and Henry is playing second fiddle. (Field recording) So Henry taught it to Jim, and I guess Jim taught it to James?
Blake said that Henry would record himself playing one part, then record himself playing with the other recording, that he was a good hand at that.

Nice rendition, Janet, full of nice feelings. And a tab too...

I worked out the musical notation for your fiddlin' friends; no one seems to have written this down anywheres.  James Bryan plays it in the Key of C; however, his fiddle must be tuned down because the second note in the second part is a G and clearly he is doing a unison on two strings, which is only possible if the second fiddle string is tuned down to G or if all 4 fiddles strings are down one step. It also makes the double stops in measures 1 and 2 less tricky fingering, since the first two notes are the open first string to the first finger  rather than the 3rd finger second string to open then the second finger to the second string for the double stop.  See what just a little bit of fiddle playing can do to a guy?

The Hudson recording on the Youtube video is clearly in the key of D: also, Jere Canote's string band class has a web site with him playing it here in D:

One important note: Bryan and Hudson play 9-12 ONCE: that is, the first part is 12 measures rather than the usual 16 measures.  Jere Canote plays these measures twice.

And, one trick that would work on this tune: tune your banjo fifth string down 3 frets to E (or without a fifth string capo F sharp when capo on the second fret); that would allow you to catch those off beat F sharps with your fifth string. 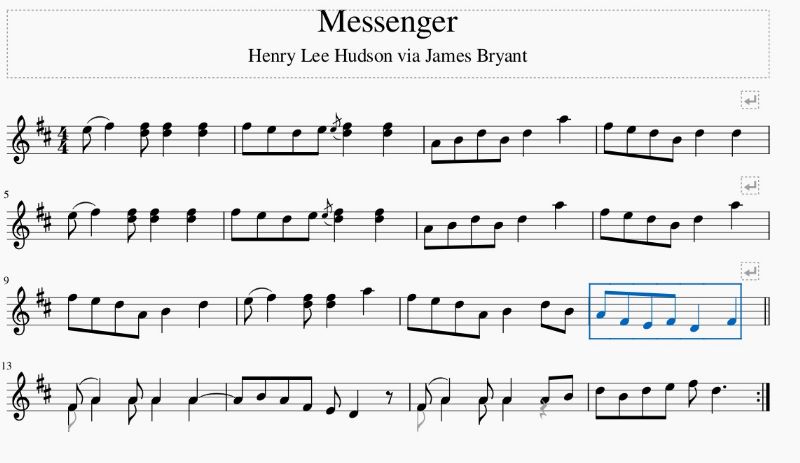 'The L in Slingerland' 1 hr