Please note this is an archived topic, so it is locked and unable to be replied to. You may, however, start a new topic and refer to this topic with a link: http://www.banjohangout.org/archive/364912

Once in a great while our volunteers can't post on their assigned date and so one of us fills in.  This week I'll fill in with a good old tune from Kentucky.

Just listening to what others post on Banjo Hangout has been a source of inspiration. I heard Don Borchelt play Old Aunt Jenny with her Nightcap On several years ago and just had to learn it. The source fiddler, Kentuckian Estill Bingham, has been introduced on TOTW at least four other times when we had Cookhouse Joe, Katy Fetch the Soap Home, Jake’s Got the Belly Ache, and Old Billy Hell.

Some biographical information is found on-line and in Jeff Titon’s book Old-Time Kentucky Fiddle Tunes. Born in 1899 in Bell County, Kentucky, the youngest of thirteen children, Estill began playing fiddle at age seven and eighty years later knew over 120 tunes. His mother had him first learn gospel tunes to prevent him from becoming too “rowdy.” His father, Noah, taught him Old Aunt Jenny, a crooked tune. It’s said that many of his tunes are unusual.

Bruce Greene and Bob Butler recorded Estill. According to Bruce Greene in the Traditional Tune Archive, “Bingham learned the tune from an itinerant preacher by the name of Columbus ‘Lum’ Green, who would circuit to the remote area every few months to conduct services, after which he would play the fiddle.” You can hear the archaic melody with its crooked B part and imagine the elderly woman with the old-fashioned night cap folks used to wear.

Access is available for over 30 Estill Bingham recordings at the
Digital Library of America.   Jeff Titon wrote, “With a fairly light touch he sawed back and forth in short, jigging bow strokes, seldom resting his bow on more than one string at a time. He died at age ninety-one in a car accident.” Estill Bingham playing Old Aunt Jenny with her Nightcap On 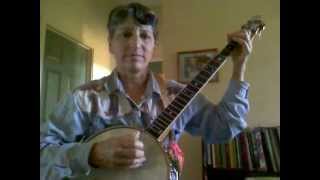 VIDEO: Old Aunt Jenny with Her Nightcap On
(click to view)

Old Aunt Jenny with Her Nightcap On

Old Aunt Jenny With Her Nightcap On (CH) tab

Shoot, Janet, I had some technical difficulties this weekend and was just about to post. I'll keep in in the computer so it's just a cut and paste to post next time.

This is a great choice and I need to get under my fingers and memorized.

Thanks for posting this one, Janet. I had heard it at a jam a few months ago and wanted to learn it, but by the time I got home I had forgotten the title. Nice write-up, and I love your three finger version.

Here's what I've come up with in the clawhammer style - and a tab to go with it. 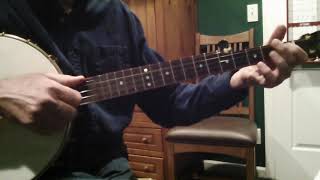 VIDEO: OLD AUNT JENNY WITH HER NIGHTCAP ON
(click to view)

Old Aunt Jenny with Her Nightcap On