Please note this is an archived topic, so it is locked and unable to be replied to. You may, however, start a new topic and refer to this topic with a link: http://www.banjohangout.org/archive/363821

Picked a familiar song for this weeks TOTW, but with a little bit of a twist... this isn't the usual "Old Smokey" that a lot of folks are familiar with from the Weaver's 1951 recording. This version is from one of my all time favorite banjo players Kentuckian Rosko Halcomb, better known to most as Roscoe Holcomb. But first, a little about the song.

The origins of "Old Smokey" or "On Top of Old Smokey" is a true folk enigma. There isn't a single source of the song that I could find until famed musicologist Cecil Sharp and Maud Karpeles transcribed 23 year old Miss Memory Shelton singing the song in Alleghany, Madison County North Carolina on 29 July 1916. No links to prior English/Scots/Irish ballads, the song just kind of appears out of nowhere. Miss Shelton's version contained 12 verses, and differs slightly from what became the "standard" version of the song. A E.C. Perrow had published text for "On Top of Old Smokey" in 1915, pre-dating Sharp and Karpeles work, but the words differed, and other versions of the song, with slight tonal and lyrical differences were soon "discovered" throughout the Smokey Mountians of NC and Tennessee.

The tune to "Old Smokey" was used for a version of "The Little Mohee" which was collected by folklorists Loraine Wyman and Howard Brockaway in Pine Mountain Kentucky contemporaneously with Sharp and Karpeles, but the lyrics are completely different. So who knows what came first or where the tune originated.

Even the location of "Old Smokey" is subject to dispute, since so many different versions were collected by folklorists and musicologist's throughout the Appalachia's, but Clingman's Dome , the highest mountain in the Smokies is a solid candidate, having been given the name "Smoky Dome" by the first Scots-Irish settlers.

The first commercial version of "On Top of Old Smokey" was recorded by George Reneau from Knoxville, Tennessee on the Vocalion label in 1925. Pete Seeger famously took the tune, wrote new lyrics and recorded it with the Weavers in 1951. Pete always posited that he felt that certain verses of the original lyrics might have gone back to the early 17th Century. The sing has been recorded by everyone from Burl Ives to Swedish pop group ABBA with folks like Bing Crosby, Elvis Presley, and Gene Autry in between.  Even the "Boss" Bruce Springsteen got in the act, performing a live version in Portland Oregon in 1980, after the eruption of Mt. Saint Helens.  There are so many versions, I won't begin to link them all here.

So an undoubtedly old song originally about courting (or "sparking" as the old timers called it), with a murky history to say the least, is picked up by one of the greatest old-time music performers of all time, Roscoe Holcomb, from Daisy Kentucky. If you don't know who Roscoe is, do yourself a favor and pick up the great book by the late John Cohen titled "The High Lonesome Sound" amazon.com/High-Lonesome-Sound...869302542.  Roscoe Holcomb played a driving two finger thumb lead and raucous rapping banjo, but the otherworldly quality of his vocals is what makes his music absolutely soar into the stratosphere.  I am loath, and so have never tried to even ATTEMPT to try to sing like him (as few could... that would be like casting David Soul in the Humphrey Bogart role for "Casablanca" (this horrifically actually happened in 1983), but his songs and settings are too addictive for me to pass on, and since i have a true affinity for finger picked Kentucky banjo, I've always played a lot of his tunes ever since I learned two finger thumb lead from Art Rosenbaum's book and a LOT of listening to Roscoe's Folkways LP's back in 1974.

Roscoe tuned his banjo to an odd D tuning to play this piece, f#ADAD, and I play it here as well although to my ears this tuning always sounds better a little sharp.  Tune the 1st and 2nd strings first, and then match the low octave A & D by ear and tune the fifth to the 1st string fourth fret  The tune itself is simple to play, and lyrically the verses fit right into Roscoe's arrangement like a hand in a glove.  David Bragger was lucky enough to be given video from famed musicologist Robert Garfias, who granted David permission to post the videos, and here is Roscoe playing "Old Smokey" youtube.com/watch?v=1mLz2dmrDyo in all his Roscoe-ness.  You should be able to pick up the tune pretty easy listening to the video, but just take a moment to revel in the power of his performance.  Roscoe suffered from silicosis, asthma and empheysema from working in the mines, so where he got the power in his voice to sing like he did God only knows.

Due to the "bluesy" nature of Roscoe's version, I suspect that he may have gotten "his" version of the tune from African-American sources, who in turn would have gotten it from white sources, so a kind of reverse osmosis musically that is so cool with old-time.

Anyway, give "Old Smokey" a try, it's an easy and fun two finger thumb lead tune to play and sing, and with a little bit of mystery behind it.  Enjoy & take care!

Nice! Iâll give it a try. Later, in the evening (my time), Iâll make a recording.

I performed this once in public at a folk festival banjo workshop; everyone stopped talking and listened...it is a striking piece. 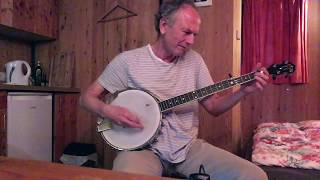 VIDEO: On Top of Old Smokey
(click to view)

Agreed Andy, it is a striking piece of music, a longtime favorite. Would love to hear your take on it.

Thanks for that! That will be rattlinâ around in my head for a good while.

Thanks for all the likesâ¦ Anyone else?

Thanks for all the likes… Anyone else?

After your and RG's contributions I think that there is nobody (but perhaps Janet?) that feel for presenting their versions.

Thanks for all the likes… Anyone else?

After your and RG's contributions I think that there is nobody (but perhaps Janet?) that feel for presenting their versions.

Why not? I surely would like to hear other versions. It can be played in clawhammer too, by the way, using the same tuning. I tried it, it works. The tuning fits very well to the tune, the notes can be easily found…

Would love to hear your take Jan Olov!!!!!

I gave it a try, though admit it's not my fortÃ¨ to sing solo here. RG and Emiel, you did the song justice. It's a heartfelt song, at least when I sang four verses from a lady's perspective. Roscoe, they say, had a powerful voice in spite of problems caused from mining. It may be he sung high because it was easier and I'm reminded of someone I know who, when he lost his voice due to laryngitis, still insisted on speaking boisterously in falsetto.

I made a tabbed arrangement of Roscoe's banjo, but just couldn't do anything to sync it with his vocals, so changed to another tuning and arranged a clawhammer version from his sung melody.

Even if people don't take up the challenge to learn and play Old Smokey, the write-up is super interesting, which is why most people probably tune in to TOTW. It has also helped me learn more about the iconic Roscoe Holcomb. Only the lyrics resemble the song as I knew it, which is the spaghetti and meatball version.

fwiw a younger and shorter version by Holcomb. youtube.com/watch?v=PoJkndLVcqM

Iâm sure this has been discussed before and I apologize, any other songs/tunes in #fADAD to have fun with?

I'm no moderator at all. ;) But yes cluck old hen from dwight diller "just banjo 99'" same tuning. great versions both of you @RG and @Emiel

I'm no moderator at all. ;) But yes cluck old hen from dwight diller "just banjo 99'" same tuning. great versions both of you @RG and @Emiel

Thank you! Yes, no moderator…

Now I see, next to your name stood "Report to" (didn't notice that) and then under your name "moderator"…

A try at the high lonesome sound ! Need to deal with my ego to sing the high pitch... :)

A try at the high lonesome sound ! Need to deal with my ego to sing the high pitch... :)

I was absolutely awed by both RG's and Emeil performances here. But I had never heard a good female take on this iconic song.

Well, Janet changed all that. I've never heard Janet sing before, so what grabbed me was how her performance sounded like what I imagined a Jean Ritchey version might sound like!

Side note: Roscoe speculated that he and Ms. Ritchey may have been related. A few years ago, my wife and I visited both Daisy and Viper one afternoon, just to absorb the vibe of the place. The communities are close by although separated by rugged terrain.

And yes, @RG, all of the headstones in the Daisy cemetery are spelled "Halcomb".

'Flathead ring for a conversation from TB1?' 2 hrs