Please note this is an archived topic, so it is locked and unable to be replied to. You may, however, start a new topic and refer to this topic with a link: http://www.banjohangout.org/archive/358436

Hello all.  This week I've selected a 5 part tune that gets played around my area (Iowa) pretty regularly.  We just call it "Little Rabbit" but turns out it is actually two tunes mashed together.   The Traditional Tune Archive says this (I'm not a fan of the big block of text they produce):

The melody is related to "Boatman." Most modern versions are based on the Crockett Mountaineers recording of "Little Rabbit," which is actually a pastiche of two or more tunes, including "Little Rabbit" (similar to versions of the "John Brown's Dream" tune family) {'A', 'B' and 'C' parts}and "Rabbit Where's Your Mammy? (1)" {'D' and 'E' parts}. This combination is oft-repeated in modern times-so much so that the 5-part piece is sometimes thought of as only one tune ("Little Rabbit"). Several parts belong to a family of tunes that includes "Brownstream," "Herve Brown's Dream," "Jimmy Johnson Pass that Jug Around the Hill," "John Brown's Dream," "Pretty Little Girl," "Stillhouse Branch" "Table Mountain Road" and others. The tune family is a common a popular one in the Blue Ridge Mountains, where it probably originated.

On my recording the banjo player is hangout member Merle Hall, Jon Duvick on guitar, and I am fiddling.  I really like how Merle gets those quick triplets in the B part, and watching him does not give me a clue as to how he's doing it (two handed sleight of hand, I assume).  A tiny hiccup in the recording just as it starts so you'll miss the first note.

I look forward to hearing how everyone else interprets this.  Happy Friday!

I learned Little Rabbit from the tab in the John Burke book many years ago. Which I think is a transcription of the Crockett Mountaineers version. I once played it at a folk club in Portland, Dorset. When I announce the title there was a scary hiss from the audience. Apparently it's bad luck to say "rabbit" in Portland (something to do with rabbit burrows in the local stone quarries). So the next time I played it there a couple of years later I bowed to local usage and called it "Little Bunny"

This is a fun tune to play. We used to play it when the caller wanted to call a square dance at our contra dance. This was with a previous fiddler. Our current fiddler hasn't called for this tune so far. I miss playing it. Here's a link to one of our recordings at a dance.

David those fellas I play with, both living the retired life, have known each other since 2nd grade and I am so lucky to get to play with them! We usually play this tune for the broom/paddle dance when there a lot of youngsters - gives us the opportunity to play something crooked and we play it fast like they like it.

Thanks RG, I honestly thought it was a pretty widespread tune but it appears that might not be the case. No matter, I’ll still play it and now maybe you will too

Such a fun tune. Glad to see it here. I remember seeing this tune in the 1970's in John Burke's book and wondering how someone could possibly play all 5 sections without mixing them up!
Enjoying all the versions here.
Here's my take from ten years ago. I learned it by ear in the 1980's.

According to  The Milliner-Koken Collection of American Fiddle Tunes, and the Slippery Hill website Crockett's Kentucky Mountaineers made two different recordings 5/1/1931, one named Little Rabbit (three parts) and one named Rabbit Where's Your Mamma (two parts). The five part version seems to be a merger of these two tunes.

Yes, it is two tunes as it says in my OP. I fixed the Crockett link to include both tunes. Only at Clifftop have I been asked "which tune are we playing, or are we playing the medley?" Around my neck of the woods, the 5 parts equal the one tune.

I think Merle may have gotten this tune from John Burke too. That name has come up a few times. I'll have to ask him.

A five part tune indeed, Billy.  I liked your group's recording and used it as a pattern to play after listening to Henry Crockett's Kentucky Mountaineers.  John Brown's Dream was a TOTW and the resemblance to the first three parts is of course striking:  TOTW, 8/1/14, John Brown's Dream. 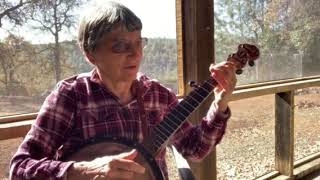 John, your band sounds like a good dance band. Janet, very nice and yes, there is a strong resemblance to "John Brown's Dream."

I hadn't heard this tune in quite awhile, I think at least a decade ago John Brown's Dream pushed it off the jam list of most old time players around here. I admit they are closely related, the main difference is that we are happy when we play Little Rabbit, and far more serious when we think about John Brown, and it creeps into the picking and fiddling. A few weeks ago I was at a jam a few miles west of Boston, and someone in the circle introduced it. I had to blow some cobwebs out of the recesses, but it came back to me pretty quickly.

Great fiddling, Billy, and great picking by Jon. It was sure nice of you to let him start it out!

John D, that's some very fine picking.  It's got that wonderful "chug" going on with your very controlled downstroke.  I hope you're still able to do this, ten years later!!!  And, of course, Janet as elegant as always.  That looks like a Ryan Navey banjo you are playing, a good fit, sweet picking needs a sweet banjo!  I got to meet Ryan this past Clifftop, and play one of his banjos.  He is a real craftsman and a real gentleman.

I posted a video of my version here on the BHO back in 2011, on my semi-fretless Paramount, tuned aEABE.  I think I want to put this back in my rotation!

According to  The Milliner-Koken Collection of American Fiddle Tunes, and the Slippery Hill website Crockett's Kentucky Mountaineers made two different recordings 5/1/1931, one named Little Rabbit (three parts) and one named Rabbit Where's Your Mamma (two parts). The five part version seems to be a merger of these two tunes.

That's not right. They made one recording and its just a medley of two tunes.The title makes that clear. The two links to Slippery Hill are two excerpts from the same 78.

Yes, plausibly from the John Burke book, as that was one of my first books when I started playing. One of the recordings I enjoy is on Kenny Hall and the Sweets Mill String Band, Volume 1, though seems like I heard it previous to that, but don't remember where. Since Kenny was in California, maybe that tells you something about why it's the variation it is.

Best I ever heard it was the five-part version by the Busted Toe Mudthumpers with Waltl Koken on banjo in early 1969. Blazing fast, driving, and Walt played all the notes. Iâve never been able to get his driving, rhythmic lilt when i play it.