Please note this is an archived topic, so it is locked and unable to be replied to. You may, however, start a new topic and refer to this topic with a link: http://www.banjohangout.org/archive/358230

One of the most frequent topics on the BHO seems to be how to pick up tunes "on the fly", and since there is an active thread right now on the topic, I thought I'd try to dovetail a TOTW into that whole concept.

The tune is WVa fiddler Ernie Carpenter's "Gunboat." I really like Ernie's fiddling, it has a simple complexity that appeals to me. Appalachianmusic.net has a nice biography on Ernie appalachianmusic.net/naf/HTML/...%20EC.htm and you can find his field recordings if you search around, along with this fine FRC release from years back fieldrecorder.org/product/ernie-carpenter/.

The tune itself was learned by Ernie from Wallace Pritchard and is fairly common and goes by multiple names, AKA "Hornio" &  "Going Down to Georgie-o" Melvin Wine called the tune "Gunboat Whistled into Georgi-o." Since gunboats were a pretty big technological innovation from the Civil War, the tune may date back to that period, but there's certainly no concrete proof of that.

If you already pick tunes up on the fly, no need to go any further, hope you enjoy the tune!  If not, hang on as I try to walk you through it...

The tune is usually played in "A" or "G", and the fiddle is tuned to cross tuning (for "A" it's AEae & for "G" GDgd).  I play it here in cross "G", so knowing how the fiddle is tuned and the key gives you the obvious first clue on how to "pick it up on the fly", since in open "G" tuning for the banjo (gDGBD), you have four matching stings to the fiddle... so where the fiddler is, you'll find the same notes on your banjo... so in person, watch where the fiddler's fingers the first time around and that will give you a lot of melody clues, as well as the ends of the phrases will be 'G" notes since the tune is in the key of "G" (usually for most tunes)... so you've already picked some notes on the fly without even listening to the tune...

All that sounds pretty complicated doesn't it?  It's actually a lot easier than that by using your ear to hear when the fiddle goes high or low.  You often hear musicians say you should hum or sing a tune, and that's why... if you know the starting point of a tune, you'll know if you going to grab a lower or higher note... in this case we move from an "A" to the open "B" which you can hear on the fiddle.  And don't forget that if the fiddle uses that low "D" or "G" you can go with the high "D" on the open first string as a counterpoint, or the first string at the fifth fret to grab the high "G", and also don't forget your fifth string high "G" as well...

If I could write a tab I would, but I can't and that kind of defeats the purpose anyway.  The first time through on the banjo I use a lot of single string notes to match parts of the fiddle and then branch out into some drop thumb etc.  That's a good approach too (as many others have said on threads here), pick out those melody notes and then flesh them in with hammers, slides, pulloffs, drop thumb etc.

I've include just the fiddle track at a moderate tempo, so just listen to the tune and hum it/sing it and follow the notes up or down... it's amazing how your fingers will eventually follow your brain as you "sing" the song to yourself.

Ok, enough of all that, have some fun figuring this one out, and hope you enjoy...

For the motivated student:

Nice tune, RG. And this is a good one for someone to try to pick up by ear.

Thanks Andy and David... yep, lots of open strings you can play in this one...

You're right, RG, this fun tune grows on you and was possible to play (and even tune) by ear. First I tried open G and found that I had to jump up an octave to get part of the B melody. So I tried the cello banjo and tuned it to Ernie Carpenter's recording on Slippery Hill (Ernie Carpenter's Gunboat on Slippery Hill). It turned out to be in an equivalent to open D, graveyard, Reuben's tuning, but tuned down a few steps to c#AC#EA (Anita Kermode's description of open D tuning on Zepp's site).

I also read in Mountains of Music, West Virginia Traditional Music from Goldenseal, edited by John Lilly. The article on Ernie Carpenter, one of many, with its excerpt of home recordings by Gerald Milnes and Michael Kline describe exciting pioneer history in Elk River country.  Ernie Carpenter is on the cover, playing the namesake tune Shelvin' Rock, commemorating the one he says his great-grandfather Sol was born under. 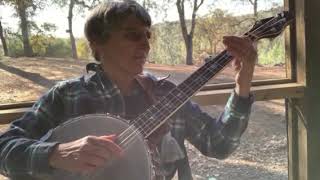 Janet, my mind is still boggling as to how you can do this so quickly. Jim

I meant Janet!!! Struck down by spellcheck once again, or just old age perhaps!

'Banjo outside it's comfort zone?' 12 min