Please note this is an archived topic, so it is locked and unable to be replied to. You may, however, start a new topic and refer to this topic with a link: http://www.banjohangout.org/archive/357830

Correct me if I’m wrong, but I don’t believe that this tune has been chosen before as the old-time TOTW.

A bit of history : According to Anne Lederman (in her article on “Fiddling” in the Encyclopedia of Music in Canada, 1992), tune was first recorded by Québec fiddler Joseph Allard as “Reel de Ste Anne”—which became popular in English-speaking Canada as “St. Anne’s Reel.”

While this is not proof that “St. Anne’s” origins are French-Canadian (as Allard spend much of his youth in upper New England, where he played in fiddle contests, and presumably came into contact with regional musicians), it is suggestive. There are at least two bays by this name in eastern Canada, as the French alternate title above would suggest, though it is not known if those features explain the origin of the tune’s title. There is a French community called Baie Sainte Anne, on St. Anne’s Bay, near the mouth of Miramichi Bay, New Bruswick. “St. Anne’s” was popularised by Radio and TV fiddler Don Messer (who had the title as “Sainte Agathe” in his 1948 Way Down East collection), and has been assimilated into several North American and British Isles traditions and remains a popular staple of fiddlers’ jam sessions. When asked to play a Canadian tune, for example, American fiddlers generally will play “St. Anne’s” first. It was in the repertoire of Cyril Stinnett, who epitomized the "North Missouri Hornpipe Style" of Mid-West fiddling, though it soon became a popular staple of most Missouri fiddlers. It was perhaps from listening to Canadian radio broadcasts in the hey-day of the big AM band stations, which could be heard clearly in the northern part of the state, or it may have been brought back by contest fiddlers in the 1960’s who attended the renowned contests in Weiser, Idaho, and in Canada. Perlman (1996) similarly states the tune entered Prince Edward Island tradition from radio broadcasts from Québec, but that it has elaborated (especially in western PEI) over the years to suit the rhythms of the local step-dancing. Irish musicians have frequently recorded the melody as well. The earliest printing of “St. Anne’s” appears to be in the Jarman collections of the 1930’s and 1940’s, where arrangement is credited to John Burt with a copyright date of 1937. Mark Wilson says its popularity in the United States dates from the 1950’s after it was recorded by Nashville fiddlers such as Tommy Jackson. The tune has some affinity to older reels, including two printed by O'Neill in his Waifs & Strays of Gaelic Melody, The Factory Lass (249) and "The Home Made Reel" (250). There is a similarity in the first part to “The Skylark [1],” composed by James Morrison. (tunearch.org/wiki/Annotation:S...%27s_Reel)

The fiddle tune is extremely popular in my home province. Don’t quote me on this, but I would wager that the tunes ongoing popularity is due to Don Messer’s version(who is from New Brunswick) cbc.ca/news/canada/new-brunswi...1.1311645

And there are number of communities and parishes and community centres etc named in her honor.

Over the years, the tune has been picked up in bluegrass and old-time banjo circles. Since this is the old-time TOTW, I’ll leave the bluegrass to others.

Here is a unique take by Guy Wolff : youtube.com/watch?v=nweASoaJCzU

And again another version by one of my favorite people on the Internet : youtube.com/watch?v=2mEPYtdm2Wk

One of my favorite versions is played by David O’Dell on his Banjo for a Rainy Day album : roanerecords.bandcamp.com/albu...rainy-day

I also posted a version of my own a few months ago (shameless plug) : youtube.com/watch?v=IOGZgrIpcMw

Truly, there seems to be as many versions as there are banjoists. It is one of my favorites!

When we were camping on Prince Edward Island a few years ago, we went to a number of Ceilis all over the island. Without fail, they always played Orange Blossom Special the Tennessee Waltz, and St.Anne's Reel.

I love playing "St. Anne's Reel" and would agree there seems to be a lot of different takes on the little bits that are aren't the basic melody per se. This should be a good one. :-)

This has been a long-time favorite and indeed it's surprising nobody else has presented it. Thanks much, and I enjoy your gentle playing.  A neat version comes from Alan Munde, but I can't find it on-line to share, so here's a song by David Mallet called The Ballad of St. Anne's Reel. 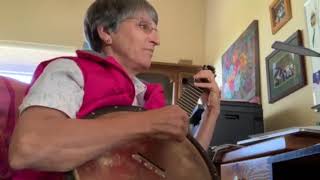 Very nice, Janet, and hoodoo too.

I noticed the link after Guy Wolff goes to Guy again. Was that on purpose?

Very nice, Janet, and hoodoo too.

I noticed the link after Guy Wolff goes to Guy again. Was that on purpose?

From a session a few years ago. Woodchoppers Reel is ending as the video begins. Both tunes are mainstays with fiddlers in central Missouri. Our fiddler brings a bit of his Irish session style to the tune.

A classic that never grows old to me. A few years back I heard a version on the Fiddle Hangout played by Fiddlescratcher.  I liked it so much that I worked out a banjo accompaniment, then recorded myself and mixed my track into Fiddlescrather’s recording (total digital experiment by means of clueless tinkering).  It actually turned out alright. I posted it here on and the Fiddle Hangout, with Fiddlescratcher's blessing.

Hoodoo, you are so right--somehow, everyone seems to have their own take on this tune.

'Banjo outside it's comfort zone?' 3 min