Please note this is an archived topic, so it is locked and unable to be replied to. You may, however, start a new topic and refer to this topic with a link: http://www.banjohangout.org/archive/357480

Sometimes a new tune becomes an old-time tune, like our current TOTW Dorrigo.  It caught my attention on Instagram, where it had become the hashtag #dorrigochallenge when Brad Kolodner’s solo on a new CD first inspired banjoist Sam Armstrong-Zickefoose.  See and hear Sam’s and Cathy Fink's version here:  Oldtime Central article.  “Banjosamjo’s” delightful banjo post inspired me to become the ninth player to accept the challenge and give it a go.  From around the world, on many instruments, in string orchestras, and as dance accompaniment, over one hundred players posted their #dorrigochallenge, mostly on Instagram and continue to do so.

I was intrigued enough to get the source recording on George Jackson’s new CD, Time and Place.  Brad Kolodner plays banjo on it and had inspired Sam. It was only natural to want to know more about the tune and its composer.  Why the title Dorrigo?  Why has this tune skyrocketed around the globe?  Who is George Jackson?  So I asked him.

George is a personable musician reachable on Instagram and via email.  He returns annually to Dorrigo in New South Wales Australia which hosts a folk, old-timey and bluegrass festival at the end of October (Dorrigo Folk & Bluegrass Festival). George will be there this month playing with IBMA bass award winner Missy Raines.

The tune Dorrigo was just one of those compositions that happen when you’re noodling around on your instrument, said George, and was written on the porch of a lodge when he attended the festival in 2012.  He said it was his first original tune that actually attracted attention right away as a jam tune.  He kept it in his phone recordings for years and it’s now on the new CD.

My question to George:  "Do you consider Dorrigo bluegrass or old time?  When I think of Brad Kolodner I think old-time.  When I hear your recording on the CD it's more in a bluegrass format.  Perhaps's you're bridging the gap."

His answer:  “Names and genres get so confusing and hard to define. I consider Dorrigo to be somewhat of an old-time fiddle tune, in the way that say, Forked Deer is an old-time tune, and also a bluegrass tune too.  Bluegrass is a genre that absorbed a lot of other music that was already there, making the genre seem older than it is in a lot of ways.  As I’m sure you know, a lot of old-time tunes became bluegrass standards because they were played by fiddlers in stage bands.  But some formative bluegrass fiddlers like Kenny Baker, for example, I consider to be an old-time fiddler in many ways.  So while there are distinct differences between bluegrass and old-time there are certainly grey areas too. Fiddle tunes particularly can and are often played in both camps. With the Dorrigo Challenge there are plenty of straight-up old-time versions as well as bluegrass picking versions. I personally am not too concerned with fitting squarely into one or the other, besides there will always be someone to tell you you’re not bluegrass or old-time enough anyway. Hope this makes sense.”  Yes, it makes sense, George.

The new CD, Time and Place, contains all originals tunes George associates with his travels in the music world.  He’s from New Zealand, where as a teen he learned bluegrass, then studied music at the Australian University in Brisbane.  Upon visiting Clifftop as a teenager he became enamored with old-time Appalachian music and ended up living in Nashville playing bluegrass and old-time.  At the time of this TOTW his band just performed as a showcase band at the recent IBMA awards.  Dorrigo was one of the tunes they played over and over during the week.  George also teaches at music camp and is available for booking through his website georgejacksonmusic.com.  His career is taking off, and you might consider getting the new CD Time and Place, jam-packed with original tunes for  enjoyable listening. 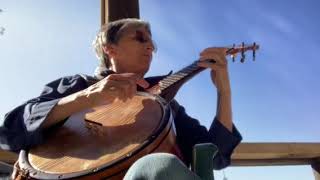 Nice blue sky you have there behind you.

Howdy friends! Here's a video of me breaking down Dorrigo piece by piece as I played it on George Jackson's record. Enjoy!

What a great tune, thanks Brad and Janet. I am hoping to play this over Thanksgiving with my family, all guitar players. What would be the appropriate chord progression?

Also of note, Brad, if you read this, my family includes Ali and Spencer Launer, you played at their wedding in Maryland in October of 2018, we chatted for a couple. Anyway, thanks again, Happy Thanksgiving.

Dorrigo indeed is a beautiful tune! I put some chords on my tab for you, Brian (@bpeterson11).  It starts with a Bm. I could be wrong, but here's what I have so far and I can play along with the band's recording. I'll contact George and Brad and see if I can get some confirmation.

quote:
Originally posted by bpeterson11 What would be the appropriate chord progression?

I just heard from George. He had chords on his website:  Chords and musical notation for Dorrigo. Enjoy!

Janet, thank you so very much, I really appreciate it!!! Happy Thanksgiving.

'Banjo outside it's comfort zone?' 2 hrs