Please note this is an archived topic, so it is locked and unable to be replied to. You may, however, start a new topic and refer to this topic with a link: http://www.banjohangout.org/archive/355213

Here’s a catchy and unique tune – Snake River Reel, with the contemporary composition date of 1985. Composer, musician, dance caller, and potter Peter Lippincott recently wrote: “I just came up with it noodling around one day, oh so long ago. String bands in St. Louis where I lived took it to Galax and other fiddle venues and it caught on. Who knew? I named it after the Snake River, but other than sounding like a cool name there is no added significance. I also wrote an influential contra dance by the same name at about the same time. Doubling down on a good name I guess.”

Peter is the humble recipient of the Arkansas Living Treasure Series Award for practicing and educating others about the traditional craft of pottery. Take a look at and listen to Peter's pottery shop and his entertaining song.  Since Peter, who now lives in Fayettesville, Arkansas, was then living in St. Louis, Missouri, the tune, in my mind, became loosely associated with the Lewis and Clark Corps of Discovery expedition. Before hearing directly from him via email my imagination soared as to the historic connotation embedded in the title.

In the Lewis and Clark story the Snake River is one of the two rivers (the other being the Clearwater) where lived the Nez Perce North American Indians. The river had bountiful salmon, a seemingly welcoming meal after the Corps had nearly starved crossing the Great Divide. As the tribe made plans to massacre the explorers, an old squaw intervened to rescue them. She had once been kidnapped and escaped, and recalled the kindness of white people from Canada who helped her. The explorers were then treated as friends. Oddly, they refused to eat the salmon, which initially made them sick, preferring instead to eat horse and dog meat as they continued their expedition to the Pacific Ocean. The swift water of the Snake River brought the men and Sacajaweah down to the Columbia River and on to the Pacific Ocean.  So that’s what I think of when I hear the tune…

On The Session site Snake River Reel is described as an old time reel “that changes mode whilst keeping the same tonal centre.” It begins in D-Major, then switches to D-Mixolydian in the second part. Notation and video links are included in the Snake River Reel discussion on The Session.  I first learned it from Dan Levenson's tab in Buzzard Banjo, Clawhammer Style. It's rare when a tab is my first source for a tune, but it is played so nicely and sounded so unique that I couldn't help but like it. I suggest you get the book for the tab, CD, and twenty-four other great tunes.

You can seek several versions to hear on BHO. Enjoy watching these on-line samples of Snake River Reel, including some lessons:

The Kolodners, father and son

My MP3 was recorded on a small scale fretless Gourdeous gourd banjo in 2012. The new video is a medley of two tunes, Snake River Reel and Over the Waterfall, related in their mixolydian mode, as well as in some thematic association I have to the Lewis and Clark expedition. I link them when thinking of portaging their equipment and supplies around the Great Falls of the Missouri River and their subsequent and triumphant trip down the Snake River, headed to their Pacific Ocean destination.  If you haven't watched Ken Burns' film, Lewis and Clark, The Journey of the Corps of Discovery, you're missing a good one.

Sometimes old-time melodies are not exactly old, but they're sure good tunes. Hope you enjoy and share Snake River Reel. 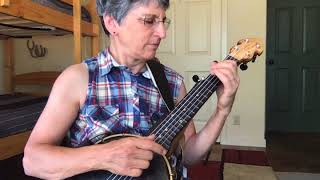 Donât know why but probably my favorite tune. Nice write up.

Yes, that IS a catchy one. It kind of reminds me of some of the other new tunes like Sadie at the Backdoor and Waiting for Nancy...

I love this one; showed it to a few musicians in my neck of the woods, and was thinking of presenting it. Great dance tune, and now that I know there's a dance too I'll have to look it up. I'll get a recording up if I can get together with a banjo picking friend (I'm a fiddler).

A fine tune that blends nicely with Over the Waterfall. I kinda hear echos of The Girl I Left Behind Me inside the tune.

I was living a few miles away in Metro St. Louis when this tune originated. We amassed a lot of pottery during our time in Missouri but didn't have the pleasure of meeting Mr. Lippincott

Glad you're enjoying Snake River Reel.  My medley of Snake River Reel and Over the Waterfall accompanies an iMovie showing my recent square dance photos.  Photos were edited with a Moku Hanga app, emulating a Japanese wood block technique.  See if you recognize the well-known members of the band (who, alas, had no banjo).

The second video is a contra dance where Snake River Reel is the first tune, played by the Paint Creek Country Dance Orchestra.  I hear their hammered dulcimer, piano, guitar, fiddle and cello.