Please note this is an archived topic, so it is locked and unable to be replied to. You may, however, start a new topic and refer to this topic with a link: http://www.banjohangout.org/archive/351211

Well, I was going to post a two finger index lead version of Blue Goose that I learned from Paul Brown, but it was raining today and I felt like doing a good old Uncle Dave Macon song instead to liven things up a bit.  I've always had a love for steam trains, and train songs in general, and I have been know to play a game of cards every now and then or roll the dice at about every opportunity... so "Railroadin' and Gamblin'" it is...

A little background on Uncle Dave, he was born in 1870, he grew up in Nashville when his family moved there from Smartt Station Tennessee.

His parents bought the Old Broadway Hotel in Nashville which was frequented by artists and troupers from traveling vaudeville and circus acts.  In 1885, he learned to play banjo from a circus comedian named  Joel Davidson.  Macon's father was murdered outside the hotel in 1886 and his widowed mother sold the hotel and the family moved to Readyville Tennessee where she ran a stagecoach inn; Uncle Dave played banjo from a makeshift stage for travelers at the rest stop.

Macon married in 1889, and moved to a farm near Kittrell, Tennessee with his wife and eventually 6 kids. Around 1900, Macon opened a freight line between Murfreesboro and Woodbury Tennessee called The Macon Midway Mule and Mitchell Wagon Transportation Company, and he carried his banjo with him, playing at his freight stops.  In 1920, he had to close the freight business and sell his beloved mules due to competition from the good old horseless (or muleless in UDM's case) carriage.

Although Macon had played for close to thirty years prior, his first professional performance was in 1921.  Having learned from a circus performer, he had developed banjo tricks that were quite common with players of the 19th Century, and his work as a freight hauler frequently put him in contact with Black stevedores and freighters, so his repertoire bridged the gap between the minstrel era and the old-time mountain music being played that wasn't written down by Tin Pan Alley or the banjo tutors.  In 1923, during a performance in Nashville, UDM was offered fifteen dollars by Marcus Loew (who owned Loew's Theater in Birmingham) to perform... the rest as they say is history.  UDM was soon making several hundred dollars a week (around 5K a week per the inflation calculator) and Loew soon put him on the famous Loew's Vaudeville circuit. At the young age of fifty, Uncle Dave found fame and success as a banjo player (imgaine that)!

In 1923 Macon, joined by fiddler Sid Harkreader, began a tour of the south-eastern US.  On July 8, 1924, Macon and Harkreader made their first recordings for Vocalion in NYC.  The session lasted several days, and the duo recorded 18 songs.  They recorded again in 1925, in addition to continuing to tour with Loew's Vaudeville troupe.  In late 1925, Macon met legendary guitarist Sam McGee, and the two started performing together.  In 1925, Macon and Harkreader performed a benefit for the Nashville Police at the Ryman Auditorium (the future home of the Grand Ole Opry) three weeks before WSM founded the still running show.

UDM played on WSM's radio show for 26 years, but he wasn't a regular performer in the years of the Grand Ole Opry as he continued to rake in the dough touring.  In early 1927, Macon formed the legendary Fruit Jar Drinkers with Sam and Kirk McGee and Mazy Todd.  They first recorded on May 7th, 1927 and I highly encourage anyone with a passing interest in old time music to check out their recordings.

UDM was a prolific recorded artist, and cut sides for Vocalion, Okeh, Gennett and Bluebird records.  Uncle Dave actually toured briefly with Bill Monroe in the late forties (clash of titanic egos), but like the true old-time Luddite that he was, he didn't care a whole lot for bluegrass or three finger Scruggs style banjo playing.

Uncle Dave played his last show on March 1, 1952, and died three weeks later on March 22, 1952.  His funeral was attended by more than five thousand people and his pallbearers were George D. Hay, Kirk McGee, Roy Acuff, and Bill Monroe.  He was inducted posthumously into the Country Music Hall of Fame in 1966.

So now we know about Uncle Dave, a pivotal figure in banjo history.  I've always thought that UDM was as close as it gets (besides Charles Asbury) to what minstrel banjo styles sounded like, as he played virtually every banjo style known to man... and for all of those banjo "scholars" out here who scoff at the idea that banjos were tuned to anything BUT high or low bass, he played in a surprising variety of alternate tunings...

But what about "Railroadin' and Gamblin'?"  Well... I got nothing.  Probably a vaudeville or circus number, it's a good old "rounder" song.  It's easy to play, fun to sing... UDM plays it in open "C" tuned up a bit, he first recorded it in 1929, but the side was unissued... he later re-recorded it for Bluebird (Victor budget label) in Charlotte on 26 January, 1938, and this one was released, but it wasn't a big seller (the Great Depression and all), so it's a little scarce to find in it's original 78 form (either on Bluebird or it's licensed Montgomery Ward release).

Here's the lyrics as I hear them from the original, I change a word or two on my version...

What your mammy am told you, six months ago

Keep on your coat and hat, be ready to go

Been in the state house, been in that hall

Been in that courthouse, the worst place of all

Said that preacher, "Golly, ain't that a sin

Lord that preacher "Golly ain't that a sin

Spent all my money, no way to get back

That's about it, here's a couple of great versions, Art Rosenbaum plays a short version in his instruction book amazon.com/Art-Rosenbaums-Old-...786686022 (I highly recommend anything Art Rosenbaum in regards to learning materials for old-time banjo styles)...

And John Cohen when he was with the NLCR...

And that's about it, give this one a try, just keep it rolling like a heavy loaded freight train going downhill... and as my dad always told me, never draw to an inside straight...

And Tom Paley when he was with the NLCR...


Very nice presentation. However, it sounds like John Cohen to me and not Tom Paley.

Thanks Carl, you are of course right, it is indeed John Cohen and not Tom Paley on the NLCR recording from their first album, I should have checked the liner notes and didn’t.  I corrected my original post to reflect that, thanks for pointing it out...

I recorded a little ear learning clip for the song (runs about 15 minutes), it's a real easy tune to play.  I broke it up into "sections" (a relative concept for this song as you'll see) and hope it helps some of you to learn this one by ear... I am HORRIBLE at writing tab (or even reading it for that matter), and not much better at teaching, but hope this gets you started on the way to playing your own version of the song.  I use "double thumbing" for descriptive purposes (sorry, that's how i learned it), but think most people call it "drop thumbing" these days, sorry for any nomenclature confusion, it'll make sense when you listen to it...

I encourage you to give "Railroadin' and Gamblin'" a try, it's a great old song and a good one to have out there in the air...

Another super singing performance by you, RG. Your banjo moves along as fast as Uncle Dave's and Huddy's, and so I'll give it a go here. The tutorial breakdown you gave was helpful and I made a tab to help me learn. 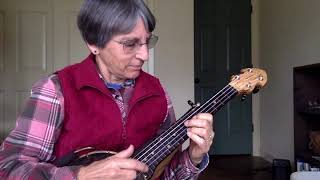 Love your version Janet, real nice as always and sounds great on that short scale! Thanks for writing out a tab to attach, as I said, I am REAL bad at tabbing stuff out, so I appreciate the additional learning tool for folks...

Thank for this tremendously valuable information this is what i live for ;)

My pleasure Bobby, thank you!

'Another overlooked topic here (that does not bother me) but still....' 59 min