Please note this is an archived topic, so it is locked and unable to be replied to. You may, however, start a new topic and refer to this topic with a link: http://www.banjohangout.org/archive/350517

I first heard this tune played by the Corn Potato String Band. And man, if you haven’t listened to this trio before, you are in for a treat (cornpotato.com/).  As far as I know, they are the only contemporary band that has recorded this tune.

The tune sources to Jim Smoak and the Louisiana Honeydrippers.  Jim Smoak is a well regarded bluegrass picker, and the title of the source album is Bayou Bluegrass, but many of the tunes on this album sit in that old-time/bluegrass gray area (Smoak even frails on Rabbit, Where’s Your Mammy?).  Jim Smoak finger-picks “Woodchuck” on the album, but to me it is not a full-on Scruggs style.  Call it bluegrass, call it old-time, call it old-grass, early bluegrass or whatever—Woodchuck in the Deadnin’ is a cool tune, which is certainly amenable to old-time style.

The Bayou Bluegrass album is still available through Smithsonian Folkways, but many cuts from the album are on YouTube including Woodchuck in the Deadnin’:  youtube.com/watch?v=cg_8wXbEbbc

Last year, at the CROMA festival here in Colorado, I heard some jammers playing a tune that was quite similar.  I walked over and asked, 'Woodchuck in the Deadnin'?"  They called it something else, and now I can't remember the name.  So if anyone knows this tune by another name, let us know.

The million dollar question is, “What’s a deadnin’?”  I had to do some research on that, so if it’s in your vocabulary, please correct, affirm, or add to what I have found.  “Deadnin’” is an archaic term, in that it doesn’t really pop up in contemporary dictionaries.  My sleuthing revealed that early settlers used the term to describe a spot in a densely forested area where the trees have died and the spot can be used as farmland. Generally, the settlers would girdle the trees to kill them, rather than cut them down.   A commenter (Chris Green) on the Corn Potato You Tube also added this: “A 'deadnin' is a brush and branch pile built up while one clears timber from land meant for use as a field or house site later. These piles often became shelters for animals like woodchucks, etc. Hence, one would say 'there's a woodchuck in the deadnin'. The word was formerly used in New England, south to Louisiana.”

Lastly, I first took a clawhammer run at this tune just about a year ago and posted it in my mp3 archive (banjohangout.org/myhangout/med...archived=). Since then, I’ve been working on a 2-finger version, which I can play about twice through, at reasonable speed, without flubbing.  And I’ve recorded myself playing clawhammer again because, well, things change over time.

Chime in and have fun with this tune!

Woodchuck in the Deadnin' 2019 (clawhammer)

Had not heard this tune before. It is a good one though.

The word "Deadin" brings back some memories. Haven't heard that word since I was a kid.

My mother's family was a large one, and they kept in touch no matter how distant the relationships were.

My fourth cousin "Billy" was about 40 years older than me, and he and his siblings were farmers owning a large area in the Sequachee valley of Tennessee.

During Summer break from school, of the boys in the family who did not live on one of the four farms some of us were sent to help work on the "family farm". My older brother and me, along with four or five other boys around our age learned the joy of long hot dusty days of hard work, but we also had grand adventures riding horses to explore the largely unsettled valley during times when there was no work.

Some of us also went to the farm during Winter break, and Billy would take us rabbit hunting sometimes, and he used that word saying stuff like "Go kick on that deadin, and see what runs out the other side".

Heard the word a few times listening to stories my grandfather told while we sat around on his back porch on Summer evenings, but I haven't heard the word used since those days, and that was 50 years and more ago.

Great memories/story Andy. Wonderful to hear the personal connection. Interesting too that this term hasn't been out of circulation for all that long. When I started researching deadnin', I first found it used in some county agricultural reports from Virginia in the 1800s. I grew up in Wisconsin farmland and don't recall ever hearing the term (of course, the woods weren't as thick either), so it seems to be an eastern term.

How's your banjo tuned for your versions of this Jack? Sounds like standard G?

How's your banjo tuned for your versions of this Jack? Sounds like standard G?

Yes, standard G, capoed up to A.

Great tune Jack and love both of your versions, gonna have to learn this one and try to work it out on fiddle as well...

Playing the tune in two styles must be a fun challenge. I like them both.

Any time we get to peer in on a Bluegrass Boy who's gone old-timey we're in for a treat. I read that Jim Smoak took over in Bill Monroe's band as an 18 year-old, replacing Sonny Osborne as a 14 year-old who had to return to school.  In his later years you can see him playing fine clawhammer banjo, too.  He's now 86 years old.  It would be nice to try and reach him.

The Louisiana Honeydrippers play the tune with enough variety to allow lots of leeway in arrangements.  My cat joins me outside and we suspect that with this sunny weather the groundhog (aka woodchuck) will see his shadow next week and return to his burrow to wait out the longer winter. 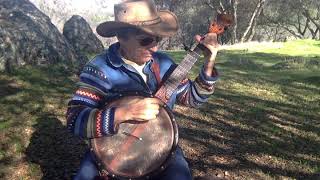 VIDEO: Woodchuck in the Deadnin' (TOTW)
(click to view)

Hello: Woodchuck In The Deadnin' was first heard in 1961 when I was looking for material to make two albums in 1961: Bayou Bluegrass --Folk Lyric, and Louisiana Bluegrass--Prestige International. Dewey Edwards, one of two fiddle players on both records learned it from his father who was in his eighties at that time.

Arhoolie Records bought Folk Lyric in 1972 and released Bayou Bluegrass on vinyl a second time; then a third time in 2002 on compact disc. In 2016 Smithsonian Folkways acquired all Arhoolie material.

I'm glad to hear that it keeps going and thanks for writing.

Also, a link to the liner notes for Jim Smoak and the Honeydrippers:  folkways-media.si.edu/liner_no...09032.pdf  There’s a lot of Jim’s history here through 2002.

'Another overlooked topic here (that does not bother me) but still....' 13 min

'Cheap price for a Stewart' 44 min