Please note this is an archived topic, so it is locked and unable to be replied to. You may, however, start a new topic and refer to this topic with a link: http://www.banjohangout.org/archive/347307

Early Times, unlike many of the tunes posted here, was written just over a quarter century ago by a still living person, Ben Winship. It was released on the CD, Early Times in 1991. Winship’s primary instrument is mandolin, but he is a multi-instrumentalist (including clawhammer banjo), a recording engineer and a singer-songwriter. He performs with numerous bands, including Brother Mule, the Growling Old Men, New Reeltime Travelers and Eli West.

Winship says, “I wrote Early Times in the back of a van in the 80’s when I was touring with Loose Ties. I guess I didn’t so much “write it” – more like I played it once and remembered how it went. It was too early in the day for a drink, but I may have been thinking about bourbon and I liked the name for the sake of the double entendre. There weren’t so many good small batch, craft bourbons back then – I bet if I’d written it today, it would have a different name…”

He goes on to mention his banjo playing: “I’ve played at the banjo (failing banjo) since I inherited one from my aunt when I was a teenager. I’ve put most of my energy into the mandolin and my banjo chops have always remained fairly primitive. As a consequence, this tune ought to be pretty easy for most intermediate players to get their hands around. Good Luck”

I have been unable to find other renditions of the tune on the internet--other than my own sound file, which I posted on BHO four years ago. Of course, Early Times whiskey having the same name as the tune created some difficulty in the search.

To digress a bit, some other Early Times tunes and albums have been recorded. Ike Turner in the 1950s recorded a song and album by that name (allmusic.com/album/early-times...000773335). A band named The Silver Jews also put out an album named Early Times. (amazon.com/Early-Times-Silver-...+times+cd).

Winship’s original recording of Early Times is on youtube. It features leads by mandolin, guitar and bluegrass banjo, followed by harmony playing on mandolin, banjo, and fiddle (See below).

Below are two videos--one playing of Early Times, and the other a harmony line. The melody starts with a triplet and has lots interruptions of my bum-ditty by sequences of single notes, hammer-ons, pull-offs and alternate string hammers, including some above a barre at the 7th fret. I play it slowly here so that you can see the fretting better. The youtube cogwheel icon enables a further slowing of the video.

Years ago, I came up with a sort of harmony line to the tune also. It is a high harmony on the A part of the melody, but then drops to a low harmony on the B part. Despite doing 11 tries on the harmony, I never got all the triplets right!  There's a video of this below, plus an audio file of the melody and harmony together:  I think it was Winship's recording of the tune with its lush harmonies that inspired me to work out the harmony part.

For those who prefer learning by tab or who prefer drop thumb,  Janet Burton has graciously offered her tab of the tune with all of that plus alternate B parts, one lower, one higher. 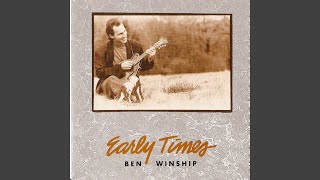 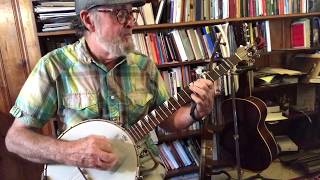 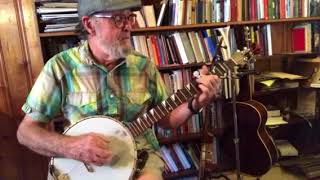 Catchy tune! Thanks, Lew, seems like I gotta learn this one.

@banjo brad, I'm happy to answer any questions you might have.

A fun tune to hear and play, Lew. Ben Winship is truly an awesome musician. Your arrangement looks even more fun than mine to play. I like your slides and how you fingered the B part at the 7th fret. The harmony version you posted is delightful, too. You inspired me to add a cello banjo accompaniment. I've included my tab again here because I had left out the repeat sign on the final ending. Your offer to help anyone is generous and I hope some take advantage. 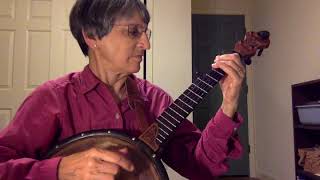 Thanks, Janet! That's a nice cello banjo version. I admire your pinky hammer-ons. I don't think I can do that decently!

I'm reposting the MP3 cello banjo accompaniment. It was tuned to equivalent of an open G, tuned down several steps, and a chordal approach was used for an easy way to play along with the melody in double C tuning.

JanetB Is the cello banjo, then, tuned to open C, but with the spacing between strings analogous to open G?

The cello banjo is tuned to dADF#A, analogous to open G. The melody was played in double D in the key of D.

Awesome takes on this tune all around, Lew and Janet!