Please note this is an archived topic, so it is locked and unable to be replied to. You may, however, start a new topic and refer to this topic with a link: http://www.banjohangout.org/archive/346662

My choice for Tune of the Week is one of my all-time favorites, Quince Dillon’s High D.

Quince Dillon’s High D is a Henry Reed tune, one of the several tunes that have Reed as our sole source, and thanks to an encounter back in the 60’s with folklorist Alan Jabbour, it has been transcribed and recorded and is now widely played. Whew! Narrowly saved from possible extinction! Where did Henry Reed get the tune? It is believed that the young Reed learned it from Quince Dillon himself, a noted fiddler and fifer who fought in the Civil War with the 166th Virginia Militia. Quince, already in his 80’s or perhaps 90’s, was an early inspiration and mentor to Henry, who used to sneak off from home to visit “Old Man Quince Dillon.”

The spelling of Dillon’s name seems to have been somewhat fluid. On his gravestone it is “Quincie Dillion”, on his wife’s gravestone, he was “Quinsie Dillon”, on his military service record it was “Quincey”, and on the spot where he was to sign his name on the enlistment papers, it was “X”. By the time his wife Jennie died, the spelling of “Dillon” had been settled upon, and that is how it remains today. Some Dillon descendants today currently own a music store, and they pay homage on their homepage to Uncle Quince. They include the oft-told tale of the Confederate prisoner, Quince, who enters a contest for the best original fiddle tune to win his freedom. Dillon made one up on the spot, and won! Although you may have heard it before, perhaps with different tunes and characters, that doesn't mean it can’t be true. I like to think that it might be!

Sometimes it is hard to conjure up the personality of a long gone tunesmith, whose soul can only be felt through the musical notes passed from player to player to us. It is always wonderful to come across a photograph to see and feel their reality. Attached is a photo of Quince and his second wife.

I like how he is sitting next to her and comfortably holding her arm, relaxed, and not formally sitting down with her hovering in attendance behind him. Her expression is a little odd, but I suspect that it washed out and a long-ago someone came in with a paintbrush to edit it. I find myself looking for tobacco juice stains on his beard, following Henry Reed’s description of Quince merrily playing the fiddle, drunk, as chewing-tobacco juice was running down his chin.

There is an interesting discussion on Quince Dillon’s High D on Fiddle Hangout.

When Henry Reed played the tune for Alan Jabbour, he couldn’t remember the name of it, and so it was passed down as “Quince Dillon’s High D (Reel)”, named for that fleeting and challenging high D on the fiddler’s E string. Although that isn’t very imaginative, it is descriptive, and perhaps that is why it hasn’t been burdened down with myriad alternative names. I can’t imagine it getting the same treatment as Stony Point/Wild Horses/Old Dad/Pigtown Fling, and Soldier With the Wooden Leg/Red-Haired Boy/Little Beggarman. That would seem insulting to Quince!

Here, Henry Reed is playing it for Alan’s tape recorder:

And that brings up a problem. Fiddle tunes usually have a “fine” and a “coarse” part, an A and a B part. So which is the A part? The recording starts after the tune is already started, and it sort of ends organically and faded out when his accompanist quits playing, with someone saying, “You done?” Alan Jabbour plays what I’d call the “fine” part first. His B part is the one that starts low and contains that marvelous “high D.”

The Fuzzy Mountain String Band A part is the low section that contains the high D. amazon.com/dp/B0010W2JU6/ref=d...tlw_trk29

In fact, most of the tune books and other recordings are made with the high D part first. Should we give Alan’s extra weight because he learned it straight from Henry? Personally, I go with the general way fiddle tunes seem to be played, with the lower “coarse” part being first and followed with the “fine” part on the higher strings. That seems right and pleasing to my ear for this tune. But obviously not to everyone. I taught the tune to Carl Pagter of the California Bluegrass Assoc., and in spite of me bringing it to him with the high D part first, he firmly stuck with starting out on the fine part instead. So this is another tune to just submit to the dominant player, I guess!

I first heard Quince Dillon's High D at a festival, played by the Piney Creek Weasels, recorded here at the end of their “D Medley” on the album “Off to California.”

The high D note was playful and captivating, and when I began to learn banjo, I sought it out to own for myself.

But it was the respectful and rhythmic treatment Dwight Diller gave the tune that influenced me the most.

My banjo is tuned to aDADE to play it. In the Miles Krassen Clawhammer Banjo book, he uses an alternate tuning of “aCGCE and place your capo on the second fret.” But I like regular double C capoed up to D, and then when that high D comes along, leap up and grab it!

Here is me, playing the tune:

I started to tab out the way I play it, since I couldn’t find the original tab I learned it from. But then I saw that tab posted right here in the Hangout, so I’ll just link it here. I do a couple things differently, but it is generally the same.

It can be done with no drop-thumbing, just lots of pull offs and hammers, so I’d call it appropriate  for less experienced banjo players. 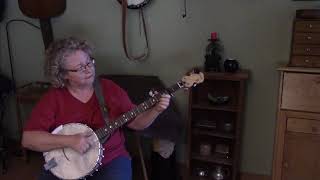 It is a nice tune, thank you for the choice. It is on my learning list. I noticed you play in double C/D tuning. I learned (or is learning) the version in MIles Krassen's book where it is played in open C capo 2 (gCGCE) which makes it a little easier to get the high D tone.

And then there’s the irrepressible Victor Furtado:

Zepp has a version that I love, and is full-Zepp (Zeppful?) complete with triplets, syncopation and some snazzy chord work:

I learned the tune from Zepp, but also sat in on a class where Mr. Jabbour taught it to a bunch of banjo players. It was neat to have such a short game of 'operator' for such an old tune. Civil War Fiddler -> Henry Reed -> Alan J. -> me!

I also love love the version Alan Jabbour does with James Reed and Bertram Levy on the "Henry Reed Reunion" disc. I think I learned every tune on that disc...

Thanks, Carolyn, for a wonderful tune with plenty of history to share, too. You introduced me to this tune and it's fun to hear how you play it now. At that time I was more into 3-finger picking, trying to not have to re-tune the banjo for the sake of the jams and band I played with. Now I just re-tune the banjo for clawhammer right up to aDADE and my short scale Carolina banjo lets me find the 10th fret D note without much seeking.

I listened to Henry Reed on the LOC recording and what a resource it is! Also, honoring the memory of Alan Jabbour by learning these tunes gives me gladness (and I have one in mind for a future TOTW). He sure played his heart out with Chris Coole and Mac Benford on the link provided above.

One of my favourites. I love that crazy jump to high D and the Cminor (?). chord in the B part.
As well as the confusion as to which is the A and which the B - We (the Bow Creek Ramblers) used to play it as a sort of medley with the A and B parts separated by a couple of parts from (if I remember rightly) Railroad through the Rockies and Dance All Night With a Bottle in Your Hand. Sounded good to us. We then heard Alan Jabbour play it at the local folk club and he said that Henry Reed had told him that he learned it as a 4 part tune but had forgotten the other two parts.

Yes. I hate to think of it missing something. But most types of compositions are better edited, and maybe this is the same.

Apologies for the thread drift but Andrew one question; Where in London do the Bow Creek Ramblers perform?

Apologies for the thread drift but Andrew one question; Where in London do the Bow Creek Ramblers perform?

Bow Creek Ramblers. Name for a loose collective of old-time players who used to meet at the Bromley-By-Bow community centre. Nowadays we are the core of an old time session on the 3rd Monday of each month at the Castle in Walthamstow.  And to get the thread back on track here's a recording of my take on Quince(y) Dill(i)on. Mainly done to check out my newly arrived Tascam DR-05 recorder. Seems to be very good for the money - intuitive and more than adequate sound.

I like "wacky" tunes and the "coarse" part of this tune certainly fits that description. Locally here though I can't find a fiddler who likes to play it. One fiddler told me that instead of going up to high "D" he just plays the lower "D." Ah, so lonely at the top.... ha! banjered

A good choice for TOTW, Carolyn, and a fine job of picking. I also enjoyed Janet's version immensely, elegant and full of tone, as always. Andrew really jumps on it, another great take! I have attached a video of my version of this tune, which I do in open D tuning (aDF#AD), where I play all of my key of D tunes. When I went scrounging around to see if I had already recorded this, I came across a recording I had made of a couple of guys jamming at the Union Grove Old Time Fiddler's Convention on the Van Hoy farm back in 1971. I have no idea who either the fiddler or the banjo picker is, but that banjo picker sure nails it. Here is a link to that old recording, made on a little portable cassette recorder, that I digitized some years ago. 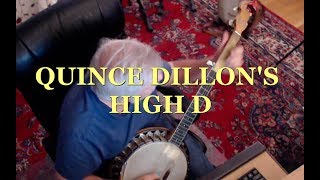 Don Borchelt the banjo/fiddle was so sweet! and I like that little giggle afterwards. Thatâs what always happens when I play with my friends.
Your version is wonderful, with that long smooth slide and the finger picking.

AndrewD I liked that! Especially the strum you use between the parts.