Please note this is an archived topic, so it is locked and unable to be replied to. You may, however, start a new topic and refer to this topic with a link: http://www.banjohangout.org/archive/271641

This week's tune is one of my favorites: Sweet Milk and Peaches as recorded by Narmour and Smith, a great old-time fiddle and guitar duo who hailed from Carroll County in Mississippi. Here's the a link to their recording (courtesy of the Slippery Hill website, which is one of the finer repositories of OT music on the web):

They recorded this for the Okeh label in New York on September 25th, 1929. According to the liner notes of County's Mississippi String Bands Volume One, WT "Willie" Narmour and SW "Shell" Smith were one of the most popular string bands in Mississippi and recorded 31 sides between 1928 and 1930, and later recut 16 of the more popular tunes for another label in 1934. Some of their other popular tunes include Carroll County Blues, Avalon Quickstep,  and Charleston #1. As far as I know, there hasn't been a reissue that includes every single tune they've recorded, but some of their tunes do appear on various compilations.

One of my favorite factoids about Narmour and Smith is that they lived in the same area and played music with one of my all-time favorite musicians, Mississippi John Hurt. Narmour actually recommended Hurt to the Okeh record scout. This website has an excerpt from the Hurt biography that goes into detail about their musical relationship. There wasn't a lot of integration going on in the recording world at the time (fiddler Andrew Baxter with the Georgia Yellow Hammers being one of the rare exceptions), but I figure I'm not alone in wanting to hear how John Hurt would've backed up a fiddle tune.

Anyways, on to the tune. It's in D (the guitar hangs on the D chord for the whole tune). I wasn't able to create a recording of myself playing this, but it's one I definitely like playing with a fiddler.

Here are a couple more links about Narmour and Smith: oldtimeparty.wordpress.com/201...ory-pt-1/

I just stumbled across this video of Frank Fairfield doing the TOTW on the fiddle, beginning at about the 5:40 point, but it is worth listening to his opening tune on the banjo:

Great choice and great write up!  Sweet Milk and Peaches is one of my favorites, too.  Those Mississippi String Bands compilations from County are probably my favorite compilation of the old recordings just because of Narmour and Smith and Carter Brothers and Son.  I finally learned to play this tune just this past August in order to play it with Amy Hofer and Bobby Winstead for a square dance at Velocult.  My favorite modern recording of it is Molly Tenenbaum and Rich Hartness playing it together on Molly's Instead of a Pony CD.  (Highly recommended!)

Great choice and great write up!  Sweet Milk and Peaches is one of my favorites, too.  Those Mississippi String Bands compilations from County are probably my favorite compilation of the old recordings just because of Narmour and Smith and Carter Brothers and Son.  I finally learned to play this tune just this past August in order to play it with Amy Hofer and Bobby Winstead for a square dance at Velocult.  My favorite modern recording of it is Molly Tenenbaum and Rich Hartness playing it together on Molly's Instead of a Pony CD.  (Highly recommended!)

My favorite modern recording of it is Molly Tenenbaum and Rich Hartness playing it together on Molly's Instead of a Pony CD.  (Highly recommended!)

Scott, I second your recommendation of Molly Tenenbaum's CD! For those of you that aren't familiar with Molly's playing, she is in my opinion in the top rank of living old-time banjo players, though I rarely see her name mentioned on the Banjo Hangout. She's a true master of the instrument, and has a powerful and distinctive style. I admit I'm a bit biased, as I've known her for 36+ years and watched and heard her playing develop over all that time - but listen for yourself and I think many of you may agree with me.

Coincidentally, I have a recording of Rich Hartness and myself playing Sweet Milk and Peaches, recorded late at night at Rich's house in Greensboro, NC in August of 2002 (the same year Molly's CD came out). My playing here is certainly not as driving and polished as Molly's playing with Rich on her CD, but it might be fun to listen to as an illustration of how two banjo players with their differing individual styles approach playing the same tune with the same fiddler. At the time, I hadn't played this tune much with Rich, and he adds a beat at the end of the high part compared to the way I learned it from the Narmour and Smith recording; you can hear me miss his timing there the first time through as well as (I think) twice more later. But we weren't "playing to" the recorder; Rich just had it running during our session, so it's just a document of what and how we played right then. I think I'll listen to some of the other renditions after I post this, rather than before, or I might change my mind.

Thanks to Adam for posting this great TOTW, and to everybody who posted different renditions! It's nice to hear such a variety of ways to approach this tune. I especially like Pat Conte's creative and beautiful guitar version.

Thanks to you, Adam, I’ve also discovered both a good book and a band from Philadelphia, closer to my father’s Pennsylvania hometown of Ashville than most groups I get to hear. In one of the links above Steve Arkin played with two brothers (I assume), Greg and Palmer Loux.  There’s a group called Run of the Mill Band who recorded Sweet Milk and Peaches in 2006. (Here’s an amazon link: Run of the Mill Band from Philadelphia playing the TOTW.)  Greg and Palmer Loux are part of that band.  The good book I’m looking forward to reading is a biography called Mississippi John Hurt:  His Life, His Times, His Blues by Phillip R. Ratcliff.

Learning this tune was challenging.  I can’t seem to hear it the same way twice, though I like all the versions I hear.  I’ve put together one with three parts and think I can play along with Narmour and Smith if I plug in the right part at the right time. 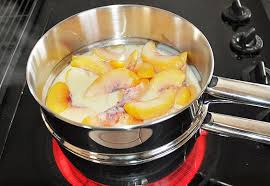 It's a sweet tune and might create a craving for dessert.

Janet, Palmer Loux is Greg's wife; she's the fiddler on that track with Steve Arkin on banjo.

It's not surprising that it's a challenging tune to learn; it was for me too, as the Narmour and Smith version is very irregular! At some point, I parsed out their version on paper (not actual notation, just beats and phrases), chose one "representative" version, and stuck with it, so that I could play it with others. Even then, I have to adjust with various fiddlers' takes on it, as I mentioned above. You have a lovely take on the tune. Very lyrical; I can see why you're drawn to Adam Hurt's playing! Did Pat Conte's guitar version also influence you? I'm imagining I can hear and echo of his chordal sense of the tune in your version.

Janet plays this great.  Just right.  Mouth watering cooking going on there, too.  And Janet’s tabs are very instructive.  To me, her rendition of this TOTW has a lot of lively bounce to it.

Brendan’s playing is strong, and his adaptability to different fiddle approaches to any tune is a real banjo capability.  On this one, he’s got it down like clockwork.  I’m glad to be able to listen to this.

I tried chasing the version by Justin LeCuyer (Fiddle) and Jared Elmore ( Banjo):

Here’s my crack at it:

As I listen back on my own Youtube video, I hear a bunch of parts and pieces I need to think about a bit more and eventually re-do.

The great thing about this TOTW drill, as Erich showed recently with a robust version of last week’s TOTW,  “Stump Tailed Dog,” is that it stands a constant learning challenge that can be revisited – there’s no “statute of limitations” preventing a player from taking yet another crack at it.

Thanks, Adam, for a tune with a good bit of history, and a lot of energy.

Every TOTW has been an amazing lesson in the depth and breadth of old-time music. The friendship between Narmour & Smith and MJH is a remarkable story.

I just received an email notification from Document Records that they're re-issuing some Narmour and Smith on CD. I'm going to have to order this one.