Please note this is an archived topic, so it is locked and unable to be replied to. You may, however, start a new topic and refer to this topic with a link: http://www.banjohangout.org/archive/215299

In my music collection I have three recording of "House Carpenter." 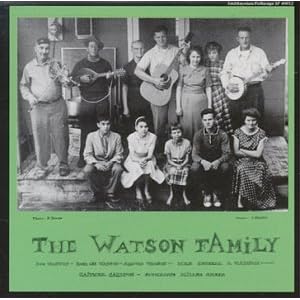 After hearing it on "Just Tunes," this tune became seriously stuck in my head.  Milliner's fiddle playing really brings out the haunting beauty of the melody.  Of course, there are many, many more recordings of "House Carpenter", yet no two are alike.

While searching online, I found the mother lode of House Carpenter nuggets:  The "Old, Weird America" blog.  It's pretty much a ready-made tune-of-the-week.

Go to the bottom half of the page, and you will find "The House Carpenter Variations."  Download the variations, and you will have 17 versions of this song to listen to.

The first one, by BanjoKreken and his wife, is especially pretty:

srselby did one that sounds like an electric banjo to me:

I'll attach my own recording, playing and singing it.  I based the melody on Milliner's fiddle, and used the lyrics from the Pete Steele version.  I used open D tuning (aDF#AD), and capo'd up to the key of F at the 3rd fret, in order to fit my low voice.  I have made a banjo tab for it, too.

You can't go wrong with this song; every one plays it their own unique way, so I hope to see lots of posts on this one!

Great choice for TOTW!  I really like your playing and singing on this one!  It's not a song I play or sing yet, but one I've liked for a long time.

Yet another good version on banjo is Martin Simpson's on his Kind Letters CD.   You can see him play a bit of it on this YouTube video.

I think it is a very nice tune, and I like your version. It was interesting that you have chosen the D tuning. I play it in both G tuning and sawmill.

Besides the versions already mentioned, I like Henry Reed's fiddling of House Carpenter: memory.loc.gov/ammem/collectio...itle.html or j-walk.com/henryreed.zip . He switches between modal and major in an interesting way.

Good choice. I first heard the song via Bert Jansch and John Renbourn in the 1960s. You can hear them playing it with Pentangle on YouTube, in a very cool version with banjo and sitar. Maybe somebody more technically adept than I am could post the link!

This song was also "collected" by Francis J.Child as ballad #243. The full lyrics have quite a dark ending for the house carpenters wife!

And a very good banjo & vocals version can also be found on the 'Old Originals vol.2" Played in aEADE by Dorothy Rorick. This album isn't available via resale but can be downloaded from the old weird america blogs

I really enjoyed your version Bob. Such clean, articulate playing! You sound a lot like Bruce Molsky to me. I don't have anything to add to the conversation--it's a great choice, as the others have all said--but I wanted to put up my compliments to the poster.

I recorded my own little version (without lyrics) when I was starting out on the banjo a few months ago. I need to go back and listen to it and see if I feel ok with posting it :).

I still think the definitive vocal version is Jean Ritchie's on her "Ballads" CD...I've enclosed the link below, download the .pdf file and read the blurb about this song, very interesting story and history about how this tune has changed considerably from its' origins...

Great pick!  I'm pretty fanatical about Harry Smith's Anthology of American Folk Music, and of Clarence Ashley, and this is one of my favorites.  The Jean Ritchie and Natalie Merchant versions are wonderful, too, and Bob Dylan did an outstanding one...more true to the older versions of the English ballad than some of the American adaptations.  One of these days, I am going to do a bunch of these...when I figure out how to sing and play at the same time.

A really terrific TotW! Some really fine versions there - including your own. Thanks for this .

Here's a .rar of 13 variations on The House Carpenter: megaupload.com/?d=0PDYH0HK

TOTW, these are some fine perfomances. Thank you. (Tony Rice! Man, aren't we worse off without his singing? Jean Ritche and Doc! Wow!) I looked at my collection and found another recording that's not been listed yet--Dave van Ronk (on "Inside Dave Van Ronk)--his inimitable voice accompanied by mountain dulcimer.

Elizabeth LaPrelle sings a wonderful version on one of her albums. Here it is live:

i'm surprised this one wasn't mentioned or i didn't notice it, This isby far the first version i heard (35+ yrsago), i think from their Cruel Sisters album but i may be wrong on that. This is a very old song youtube.com/watch?v=-4jXfMEu1YY . i always have been partial to it. NIckel Creek did and interesting version as well, maybe someone mentioned it, my brain is still out of gear from Stephen Foster Old Time Music Weekend, just got home.

Good job on your take on this one Bob, i would not have thought of doing it like that, probably due to the way i was introduced to the tune. Very interesting i like it. Banjo works very well with this song to be sure, in a variety of styles as well. A classic if you will.

i'm surprised this one wasn't mentioned or i didn't notice it, This isby far the first version i heard (35+ yrsago), i think from their Cruel Sisters album but i may be wrong on that.

It's on their "Basket Of Light" album. The Pentangle version was mentioned earlier in the thread ;-). I love the banjo/sitar combination. And the singing of Jacqui McShee and Bert Jansch. And Danny Thompson's great bass...And Terry Cox's deft drumming.

Keep 'em coming, and thanks for all the comments so far.  I agree that the Jean Ritchie solo vocal probably can't be topped.  I'm glad Dorothy Rorick and Elizabeth LaPrelle were mentioned; those are 2 excellent versions.

"And Danny Thompson's great bass...And Terry Cox's deft drumming " , You got that right wild how a jazz bas player and drums can fit in there as well. i wouldn't mind playing with a drummer if they could be as lyrical as that. Danny Thompson has pretty much played bass with everybody in the British folk music scene it seems.

Sorry for the digression from the song but nice to hear someone else that liked that great band. i don't know if Anne Briggs ever sang this great song but if she recorded it i will find it.

Here is a good link for this song informatik.uni-hamburg.de/~zie...over.html  lots of details.

Thanks for all the links, Julian.

Never heard of Ryan Bundy before, but he does a jam-up job on HC.

i was pretty impressed with the Ryan Bundy video as well very solid performance.

The Irish band, Dervish, does a nice version of the song under the name "The Banks of the Sweet Viledee". No banjo, but good vocal and ensemble instrumentation.

Yet one more link, no banjo but printed lyrics and an mp3 of Mary Smith, guitar and vocal chivalry.com/cantaria/lyrics/h...nter.html  Looks like the site may be interesting in general

Okay, I'm just coming in under the wire, I still have an hour and forty-five minutes to go before the week is up.  I worked this up years ago, and it has taken me all week to dust it off and memorize enough verses to be respectable.  Blanham, I love your version.  A great choice, probably my favorite ballad.  An oft-told tale.

Very fine picking, very fine singing, Don!  Thanks for your contribution, and the compliment means a LOT coming from you.

I appreciate the compliment, but honestly, I'm not too happy with my singing, but at least I remembered all the words this time, sort of.  Sometimes you just have to step up and be a man and sing, regardless of the consequences.

Great job Don and some birds eye view camera work there, almost all singers i know don't like their own singing so you're in good company. Sounds fine to me and great banjo as usual.

Wow..that's beautiful Don - lovely haunting picking and I really like your voice- I think it has a really nice tone actually.
I'm having a go at this too, first time I've ever tackled tune of the week - it'll take me a bit longer than a week to learn mind you - I'm late already. What I've loved is hearing all the different wonderful versions by bho members and various artists on youtube - what an education! A magical song - and great how everyone brings their own special feel to each version.
Jill

'How do I remove these D tuners from banjo I just bought?' 4 hrs