Please note this is an archived topic, so it is locked and unable to be replied to. You may, however, start a new topic and refer to this topic with a link: http://www.banjohangout.org/archive/184156

This tune comes from the fantastic fiddling of Kentucky fiddler Buddy Thomas, and it is found on his Rounder release "Kitty Puss: Old-Time Fiddle Music from Kentucky." I picked up a vinyl copy a little over a year ago at a Half-Priced Books (it was located in the children's music section!), and the CD is still in print and also available for download. It's one of my favorite fiddle albums. 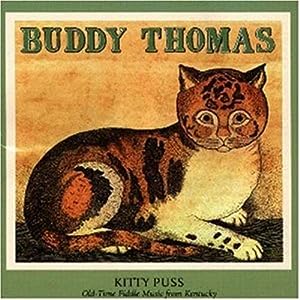 There is a myspace site for Buddy that has a few tunes on it (including Stillhouse Branch):

Here is a sample of the tune (tune sounds in G):

Here's what the liner notes (written by Mark Wilson and Guthrie Meade) to "Kitty Puss" has to say about Stillhouse Branch:

This is an unusual variant of the widely spread John Brown's Dream. Oddly enough, Buddy knew the piece alternatively as Brown Stream and believed that Brown's Dream was a corruption of the original title. He said, "When you make moonshine and it gets too hot, there'll be a brown stream come out of the coil where the whiskey comes through. Then you have to put it back and run it again." Buddy did a fair amount of moonshining in his time but he said, "I never did it to sell; just to get drunk and fiddle on. I reckon I'm about the only guy in our part of the country that ain't been caught yet." Morris Allen played this tune in regular tuning as Johnny, Bring the Jug Around the Hill, which was also Clark Kessinger's title for the piece, but Buddy learned this cross-key version (AEAE) from Perry Riley and Harve Thomas' banjo playing.


I don't know too much about the tune itself, but I sure do enjoy it. To me, it sounds a lot like Brown's Dream, as played by the Roan Mountain Hilltoppers, and also like Callahan's Reel, as played by Dyke's "Magic City" Trio.

An mp3 of Callahan's Reel, from a 78 of the Magic City Trio:

A video of Brown's Dream (as played by the Roan Mountain Hilltoppers themselves circa 1980; the video itself is of other people playing):

I'll upload my banjo version of the tune later on tonight.

OK, here is my version; apologies for the low volume. I just recorded this one, and boy, do I find myself playing different solo versus when I'm playing with a fiddler:

I also remembered that there was a video out there on the intarwebs of us playing Brown's Dream at a square dance. Colin Harris on the fiddle, Jim Parker on the guitar, Sarah King on the bass and I'm on the banjo. Ann Carter is the caller. There is a dance on the first and third Mondays, and what you are about to view is NOT a normal occurence.......

Really liked your solo version, Adam. Thanks for introducing me to this one. (And won't I look intelligent at the next jam when I'm able to call for Brown Stream instead of Brown's Dream.)

Interesting about Brown Stream vs. Brown's Dream. Now I just have to learn the tune. Thanks!