Jim Mills has written the excellent, encyclopedic book on Prewar Gibson banjos. Why has no-one followed it up with a book on post war Gibson banjos? I am fortunate to have an all original 1959 RB-250 archtop which is a fine instrument. These banjos produced from 1952 through about 1960 when Gibson made changes (not necessarily for the better) to the model. I have heard all sorts of stories, good and bad, about these later banjos but would like to see a definitive  book covering all the Gibson banjos produced from 1946 until 2010 when they ceased banjo production altogether.

Many of us lived through that period and have handled and played them, forming our own opinions, unlike the prewars, which are rare and mysterious to us.

I had an old friend who was convinced that these banjos were going to become very valuable in the not-too-distant future, so he began collecting them. When he died, he had collected a basement full. After his death, his widow thought that she was sitting on a treasure trove of valuable, collectible banjos. When she and her sons began the process of trying to liquidate the collection, they discovered that the banjos weren't really that valuable and they weren't particularly easy to sell. They ended up selling the entire lot to Bernunzio for a fraction of the retail value.

They're well made, serviceable banjos, but compared to the pre-war banjos, there's nothing special about them. I think that explains why no one has felt a compelling need to chronicle their history.

uote:    I have a 63 Bowtie flathead that will hold ot own against any Bowtie ever made. Not blowing smoke . Others who have picked this banjo can,t believe the sound, It never runs out of clarity  to the last fret. Has the sound I,ve never heard in another Bowtie.The neck was replaced with a smaller neck. That was the difference in sound,   A well known banjo maker has stated this banjo has a ring  made a lot earlier than 63. I,m not tearing it down to get a letter of that statement. It is what it is. The reason no one has put out a book on post war mastertones is there is little interest in these old banjos. The book would not sell.  Comments down grading the older Bowties is what has dampened the desire to purchase such a instrument. That is a shame to some people who could afford such a inst.  If you find one that stands out to your ears,, Buy  Make sure it has a full size wood rim, Originally posted by JayPHunt

Jim Mills has written the excellent, encyclopedic book on Prewar Gibson banjos. Why has no-one followed it up with a book on post war Gibson banjos? I am fortunate to have an all original 1959 RB-250 archtop which is a fine instrument. These banjos produced from 1952 through about 1960 when Gibson made changes (not necessarily for the better) to the model. I have heard all sorts of stories, good and bad, about these later banjos but would like to see a definitive  book covering all the Gibson banjos produced from 1946 until 2010 when they ceased banjo production altogether.

I'd love to add a late 50's raised head bow-tie Mastertone to the arsenal.

Heck even at the end of WW2 the Cold War had already started :P

A servicemember once told me there was no such thing as a peacetime army.

I have a CheckerBoard I purchased from Janet Davis Music in 2008. I put it in the vault when new. Kind of an experiment, so we'll see what happens in the future with it. 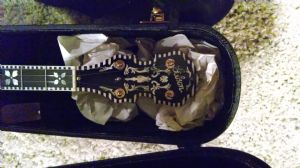 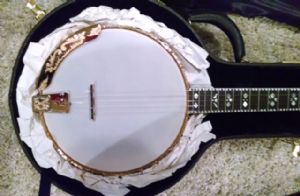 There are more of them now in the hands of pro pickers, than I saw through the 1970s, 80s and 90s. But I don't think they have enough popularity to ever "explode" in value. First there's an awful lot of them out there! Second, buyers have to take care to check out which year and which rim they're buying. So it requires a bit of specialized knowledge to buy one. It's a little bit like pre-1964 and post-1964 Winchester rifles.

Finally, playability and sound quality in these banjos requires a lot of patience to find JUST the right set up. When I was a teenager in the 1960s I was fortunate to have a "good" bowtie arch top. A lot of it was my still-growing skills, but I never thought it sounded great. But when I bought a 1926 Granada, I knew I had something on the first strum!

Bill Emerson's reviews in Bluegrass Unlimited about 1969-70 also cut the legs right out from under the bowtie RB 250 IN COMPARISON to the other 3 new USA made banjos on the market at that time -- Fender, Baldwin/Ode, and top of the line Vega.

When I think of Post-war Gibsons, I consider the 1987 to 2009 era their best period. There's too many variables and possible problems in the 1949-mid 80's era to make a blanket evaluation. The bowtie era 250's seem to sell at a good price sometimes, sometimes too good as in maybe overpriced. The 70's period has a bad rep in comparison, tho the late 60's had problems too.
There are some really fine Gibsons in the post 1987 era, right up to the shutdown in 2010. I have seen example of a few QC issues in the later years tho, usually minor stuff that doesn't affect tone.
I am jotting down notes every time I learn something new about 1949-2009 Gibsons. Maybe someday I'll write the next book?