I’ve had an interesting personal history with this tune. Since I learned how to sight read music when I was about 9, I've used this skill to learn some tunes from books where no recordings were available. I picked out this tune from Samuel's Bayard's “Dance to the Fiddle, March to the Fife”, tune #370 (The Pennsylvania State University Press, 1982). I just kept fiddling the notes until I thought it sounded like a tune and then passed it on in a few jams. About 7 years later, a friend gave me a recording of some of the sound files from Bayard's collection and it included Charles Berkey (fiddler, under middle age; near Rockwood, Somerset County, PA) playing “Cheat River”. In my mind I did a pretty good job. Below you'll find the Charles Berkey recording.

Here's what Bayard said about the tune: “The Cheat River, from which this tune is apparently named, rises in West Virginia and joins the Monongahela River at Point Marion, Pennsylvania, close to the Mason-Dixon Line. The tune itself is a compound of international strains. Part 1 corresponds to the first part of O'Dwyer's Reel [<https://thesession.org/tunes/11986>] in O'Neill MI, No. 1287 (of which the second part has no relation to our piece). Our second part corresponds closely to the opening section of a tune in Boehme, p. 159, No. 251, entitled Erster Schottisch, and labelled as belonging to the end of the eighteenth century. Likewise, our second part is the same as the first section of a tune called Nancy's Fancy (seemingly another floating title) in Karpeles 100, p. 40.” You can find Bayard's notation at:

Here some info on the river that I found on the internet.

“The Cheat is formed at Parsons, West Virginia, by the confluence of Shavers Fork and Black Fork. Black Fork is fed by the Blackwater River and by the Dry, Glady, and Laurel Forks — these are traditionally referred to as the five Forks of Cheat. (The "High Falls of Cheat" [15 feet/4.6 m high] is a few miles upstream of Bemis on Shavers Fork.) From Parsons the Cheat River flows generally northward through Tucker and Preston counties, past the towns of Rowlesburg and Albright. It then flows through an impressive gorge — Cheat Canyon — northeastwardly from Albright, collecting Big Sandy Creek before entering Monongalia County, where a hydro-electric dam just south of the Pennsylvania border causes it to widen as the Cheat Lake reservoir. It then flows for a short distance through southwestern Fayette County, Pennsylvania, before joining the Monongahela River at Point Marion, Pennsylvania. Upstream of its dam, the Cheat is one of the largest undammed watersheds in the eastern United States.”

Another site with info is:

There is also “Cheat Mountain”

for which a tune is named and is related to “Cheat River”. Below are links to versions by Israel Welch and Cecil Snow.

Here's how I passed the tune down to my fellow members of Hobo Pie (Barbara Johnson and Carl Baron - fiddles, Ray Frick - banjo and Bob Woodcock – guitar) in a medley with a Ray Frick original “Cricket in the Wood” (recorded in April, 2003). I've also included my solo banjo version.

As a long time banjo player now spending crazy amounts of time trying to get better on the fiddle, I always appreciate tunes like this: great name, great melody, and appears to be not too difficult to play on the fiddle as well as the banjo.

A sweet little tune, Carl, with lots of interesting history and a special story on your part to share how some of us picked through notated tunes in order to learn them. That's how I learned this tune, too, after you shared it with us. I was fortunate to get a copy of Samuel Bayard's book and though I find it much harder to learn with only the notes written out, it worked for this tune. 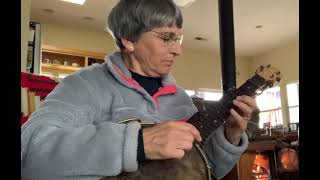 'What are your favorite banjo finishes?' 2 hrs