I can't explain why, but I've always cherished autographs when I got them. What's the autograph that you are most proud of? Pictures encouraged!!

I didn't "get" it, but I'm glad to have it. I acquired a 1903's Vega "Soloist" tenor w/ Eddie Peabody's well known catch phrase. ( Smilingly, Eddie Peabody) 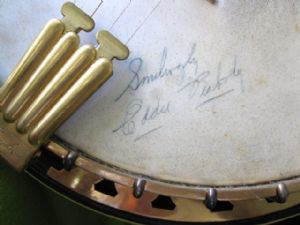 The one on the right hand bottom of the check.

I was at a festival and found a 30" x 1 1/4" wooden dowel laying on the ground. I picked it up and walked around with it all day for some reason.
Later that afternoon Dr. Ralph Stanley took the stage and I was sitting at the side of the stage.
After his performance he and his sons sat at a long table and allowed people to approach.
I was so excited to meet Dr. Ralph...I talked with him briefly about Bob Dylan covering some of his songs recently in concert and their great duet they recorded together. He was very warm and kind.
Then, for some reason, I handed him the 30" x 1 1/4" dowel and asked him to sign it and he did....
(I will upload a picture when I figure out how to do it)

After that one of my friends kids dubbed it "The Ralph Stanley Stick."

I bought an Osborne Brothers ball cap and Sonny autographed it with a personal message.

The âJ D Croweâ endorsement signature on the back of my check that bought my first 5 string banjo fifty-five years ago.

I worked for a festival for a number of years and got to work with the man who got me into bluegrass, Doug Dillard. I have a 8"x10" promo of the Darlings with Andy with Doug signing "To my friend, Lloyd". I also have an autographed photo of John Prine, another hero, from the same festival. The photos remind me how much I miss both of them.

There will be plenty of these...but this old concert program photo was given to me by a banjo student back in the 1970s. She went to see the show and got Earl's autograph on it for me.  It hangs in my office. Love the photo of Earl from his hippie period. 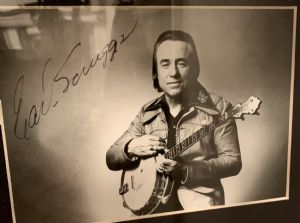 The signature that started my collection of minor celebrity autographed photos was was from Jerry Mathers. acquired in the early 1980's. Since then I have been gifted many autographed photos from musicians; Mickey Dolenz, Bluegrass artists; Ronnie Stoneman, actors; George Clooney and even Melissa Costello, Miss West Virginia of 1990. I like them all and, as far as collections go, they don't take up much room. 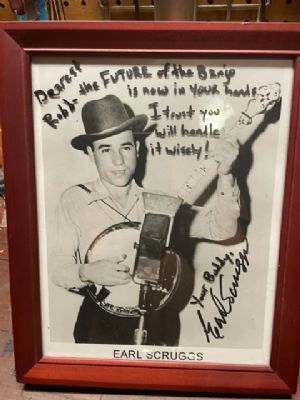 When i first got my stanleytone in 94 i was at a festival in va. Beach and told ralph" i think i got something you might want to see" i took my stanleytone out of the case and told him it was the only left handed one made(at the time) . Usually ralph would have one with him to play so he could sell one that he had used on stage. Not mine for obvious reasons. Mine was ordered directly from Frank Neat. Anyway i asked ralph to hold it for this pic and he started to hold it right handed so i asked him to flip it around a la lefty which he did. He signed the inside of the resonator as well as the head. Some years later i got Bela to sign the resonator also. 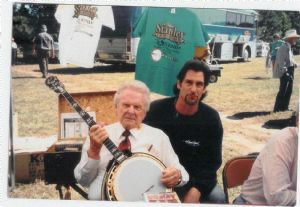 Wow, I can get double mileage out of this photo. I'm not a collector of autographs. but I have a few.

The most relevant is an autograph from the late Bob Flesher of Liberty Banjos. He signed my wood rim when I realized it was he who had designed the inlay on my banjo. I tell that story in a different thread.

Anyway, here's my contribution to this thread. 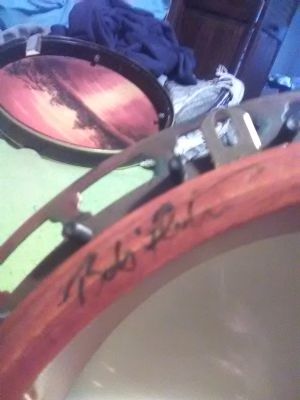 I've never been one who asked for autographs (or ever wanted one).

We were at a festival years ago and Dave got a picture of Alan Munde and Joe Carr and asked if they'd autograph it for him. They did. He framed it and hung it up. It's still there. That's the only one I've got or probably ever will have.

O had an old resonator that had a bunch of autographs in it, many now dead and gone. It also had autographs of many locals i had played with. One of my best friends had signed . He was not a big fan of John Duffey for whatever reason. Anyway some time later i had gotten Duffey to sign it. He marked right over my friends signature.. my friend now has that resonator

The “J D Crowe” endorsement signature on the back of my check that bought my first 5 string banjo fifty-five years ago.

There will be plenty of these...but this old concert program photo was given to me by a banjo student back in the 1970s. She went to see the show and got Earl's autograph on it for me.  It hangs in my office. Love the photo of Earl from his hippie period.

I've got one hanging in my office as well John. I never get tired of seeing Earl's signature...strong right hand!!

Hi, here is a very small banjo with Pete Seegers signature. I got this from Bernunzio's in 2014. Has a letter with it that tells the story, only 18" long, and playable

Here are some pics, I hope this works 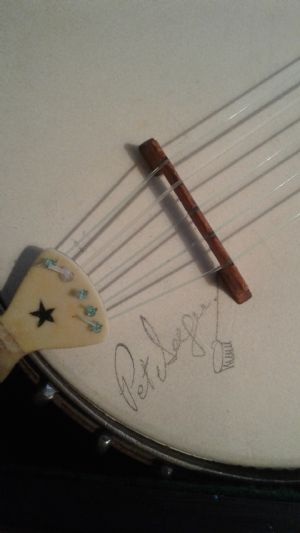 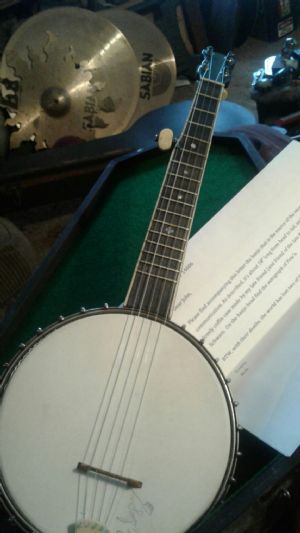 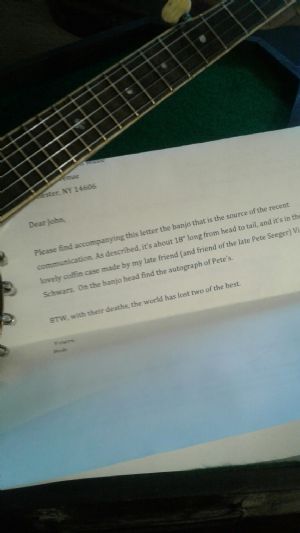 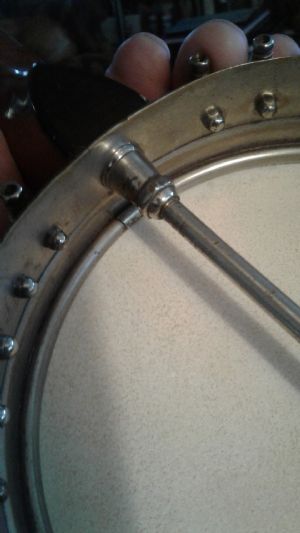 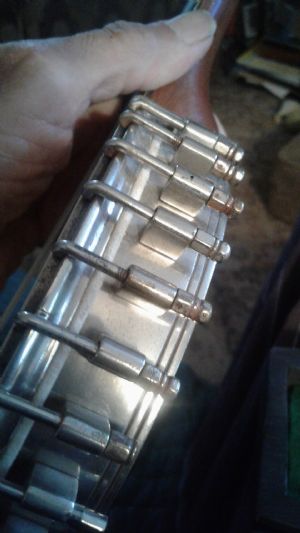 I have two on a banjo. Joe Mullins and Mike Harman. Mike was the banjo player for Alison Krauss for her first 5 years. Got a platinum album during that time period. Both are great on the banjo.

To Ted and Janice. Charlie Waller. 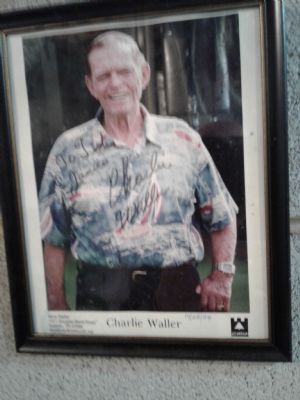 Among all letters, Christmas card, Birthday cards, strings, Crowe sent to me was the last birthday card I received before he passed away. It not the card that got my attention, It was the message written by him to me. Little did I know it was his way of saying goodbye. I have given to friends dozens of cards, letters etc from him. We both agreed we could not keep all our exchanges of personal items. it would take a file cabinet to store all these. I still have a letter of value that was placed on his no hole 3 (Banger) in the early 80,s, While in my custody, Its value was placed at $10,000.00. I Have a set of National pat pending picks, Strings, Bridges, and a Crowe McKinney capo. I have one signed Bluegrass magazine featuring Robby Boone Crowes (clone) signed. Thats Enough for me,,