I've got this 2009 RB75 custom I bought a couple of years ago from Banjo Warehouse. It's kind of special in that the resonator has signatures of some of the Gibson employees at the time. I included some links of original sale ads. The original neck broke on me as I tried shipping it to be professionally set up. Had a Gibson copy neck made from Richie Dotson. Looks and sounds great. I'm looking to sell this banjo, but keep the resonator. My question is:
Would it be better to peice this banjo out, by selling the neck and pot assembly separate, or try to buy another resonator that matches ok and sell whole?
Also, would the broken original neck be worth anything on its own? It was broken in 2 places on volute and headstock, which surprisingly went back together strong, and plays, but is pretty ugly as it's my repair and I wasn't aiming for beauty. Appreciate any responses.
Links:

I can't really answer your questions, and I don't want to tell you this, but there's a problem here.

Despite the information you were given, this banjo could never have been in Charlie Derrington's possession. The serial number places the year of the banjo's construction as 2009, but Mr. Derrington passed away in 2006.

The banjo does appear to be a Gibson product.

If you do decide to keep the resonator, it would be difficult to find an authentic period replacement.  Eric Sullivan might be able to make you one that looks right, though.  If I'm not mistaken, his family was supplying Gibson with many of their banjo parts at the time this instrument was built.

I realize the discrepancy in the dates. I had written Mrs. Derrington inquiring about banjo, and her brother called me back and said he had played this banjo and he used to play with Charlie in a band, obviously not with this banjo. He was very brief. The best I can make with the connection with Charlie is that it was perhaps made in his honor. I also reached out to Ed Weber, who was very gracious and replied back to me with pictures of just about every person on resonator. I've also spoken to Eric, as he's actually the guy I originally sent the neck to for the set up. I had packed the neck in a pvc tube thinking it impervious, but in hindsight probably packed it too tight and should have taken off the tuners

I have a thing for rescue cases. Especially if they sound good. Won't go into the details of the heavily converted, less than original, rough shape 70s RB250 I bought 4 years ago, but it's now a multi-era Gibson parts banjo -- that is with all Gibson or Gibson-OEM parts from the 60s to 90s or 2000s. Probably not even right to call it 70s RB250, but that's what the neck, resonator and armrest were. Have to start somewhere.

So if I were in the market, which I'm not, your banjo might interest me at a discount with the original repaired neck and maybe even an appropriate replacement resonator. Then, I'd set about finding somewhat to pretty up the neck repair, if possible, and keep my eyes open for a genuine Gibson resonator and hope my final all-in cost is less than it would have been to buy an original one in the first place.

You can certainly part out the banjo to try to get more than selling it complete in any version while also keeping the resonator. Whether you'd hit that goal, I don't know. But I think you'll reap the most by selling the complete pot assembly minus resonator and then the repaired neck, even without tuners -- because I think by the 90s they weren't "Gibson" stamped, so I think originality is less of an issue. Would you also be selling the Dotson neck? Are you just keeping the resonator for historic value of the signatures or is that going into a project?

I'm wanting to sell everything except the resonator, as a kind of Gibson history. Paid a good chunk for the new neck. When I said ugly repair on Gibson neck which I broke and repaired myself, I meant it. See photo. I know I won't recover near the money I put into everything, but I acquired another banjo while waiting for neck to be built and realize I just don't need more than 1 banjo and would rather it be played. 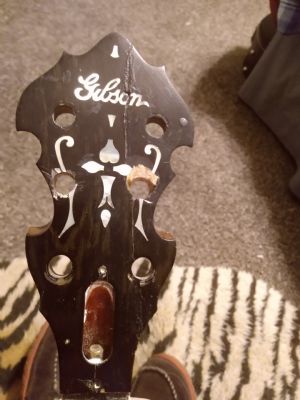 I have not seen a break like that, but with dowels and a new overlay, it has potential. Definitely not firewood!

Just some speculation on my part...

So I will GUESS that it was made in August 2009, 53rd "75" made that year.
The "C" must stand for "custom", although not sure what that represents (insofar as custom appointments that deviate from regular production).

I believe Gibson banjo production actually ended in 2009 BEFORE "the flood" (which was in 2010). Not sure of what month, however. Perhaps someone will provide that info.

I'll GUESS that this may have been one of the last RB-75's (custom or otherwise) to be finished, possibly accounting for the employee signatures in the resonator.

If you want to keep the resonator (I don't think it's "that" special) buy a good replacement from Sullivan that nicely matches the stain on the Dotson neck. Then sell it.

Sell the broken neck separately to a do it yourselfer.

The best value of course is sell it WITH the signed resonator. That might excite a few potential buyers. But I doubt those signatures add much concrete value.

Is the Dotson neck the one in the photo here in this Forum?  If you're going to sell it here you need a lot more photos of the CURRENT neck and whatever resonator you sell with it.  The reliance on the older ads like Banjo Warehouse when it had a different neck are not really helpful, except to show provenance.

Thanks for replies. The broken neck picture is the original neck. The links were the original ads. I'm not sure if you're seeing any other pictures stored from other banjos. I haven't taken any pictures of the new Dotson neck yet, as I've been trying to figure out what I want to do. I appreciate the advice and it seems the consensus is to keep as much of it whole as possible. I do intend to sell, just gotta figure out the resonator conundrum

BTW, @The Old Timer, I really appreciated your posts regarding how to install the Kluson tuners. That's the reason that broken neck has the extra holes. I used it for practice before drilling into my RB500. There wasn't a whole lot of info on the web about these tuners, but your posts were the most helpful 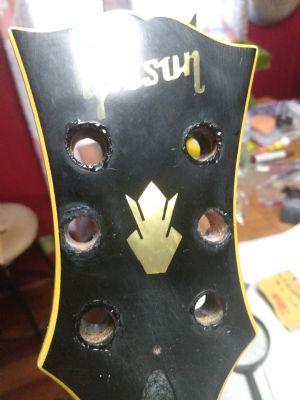 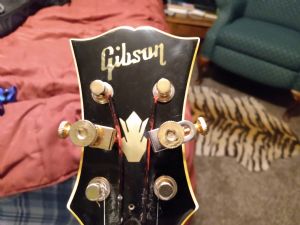 'Somewhere Over the Rainbow' 3 hrs

'Somewhere Over the Rainbow' 3 hrs