Howdy! I just came into possession of a '70s (I think) Martin Vega openback 5-string. I have no other information available about it and am hoping someone here might help me draw a bead on the identity of this critter. OK, now I want to write a song about it, but that's for another day.

It's got the Martin decal on the back of the headstock and inside the rim, with either a 686 or 688 serial number. Plain, round dots, double truss, vintage dust. It plays so sweetly, especially with a bandana in the back folded juuuuuuuust right.

I have some pics in my media folder - if you need another angle let me know. I have emailed Martin for info and have yet to hear back. The depth of expertise and ricocheting humor on this site are truly stellar. Thanks in advance for sharing yours!

You have what was known as the Vega Wonder banjo. Vega used to call them the "Folk Wonder" since it has no resonator. Vega also made the Wonder with a resonator.

It has no tone ring proper, instead a simple tone hoop and side skirt.

Very well made, especially the neck/fingerboard, etc. Not the entry level model (that was the "Ranger"), so perhaps an intermediate type banjo.

I owned a Vega by Martin Wonder with resonator. Fine lightweight banjo with pro quality neck.

Did you get a good hard shell case with it? Might be worth $700-800 as a package. Probably the best VALUE open back 5 string banjo on the market, new or used!

Play and enjoy it.

Yes, the 1970s are now vintage. 50 years ago!  That doesn't make them hugely valuable, but the are old-ish, and American made, compared to a lot of new stuff in the market today.

Those are excellent banjos, suitable for "folk" playing and stringband work. A keeper, no doubt.

Martin obtained hundreds of completed banjos and hundreds more that were parts made by Vega when CFM bought the company in 1970.

Your pot was made by Waverly for Vega before the sale (Waverly was already out of business by then). If you post more pictures, I can tell you if your neck was made by Vega or Martin.

Thanks for the details, Dick! You cleared up a lot of questions. And I did, indeed get a nice, form-fitting, crushed-velvet hard case with it.

Martin obtained hundreds of completed banjos and hundreds more that were parts made by Vega when CFM bought the company in 1970.

Your pot was made by Waverly for Vega before the sale (Waverly was already out of business by then). If you post more pictures, I can tell you if your neck was made by Vega or Martin.

Mike, I have posed some shots of the neck in my default album. Thanks in advance for taking a peek!

You have a Vega made banjo but the neck lacquer appears to have been applied by Martin. I can see the Vega construction underneath but had they finished it, the color would be different. The darker areas at the heel and headstock are stained to cover up the scorching left by the carving machine. This is a Folk Wonder as you've been told and is a direct descendant of the Vega Regent of the 'teens and '20s.

The Elton 'pancake' tuners are original and were used by Gibson and Fender and others in the 1960s. As long as they work, no reason to replace but if they start binding or cannot maintain tension, there are many excellent replacements on the market.

The Waverly 'old style' tailpiece is a replacement but it's easier to string than the original Waverly P-110 — repros are available but good luck finding one in chrome. I'd leave it alone,

If you show the armrest mount, I should be able to tell you more.

Deering still makes a version of this banjo. It has nicer woods but the design and construction are the same. No idea why they decided to name it after the cheaper Senator instead of the original Regent. I suppose that I'll ask Greg the next time I see him

I really like these. Properly set up (I like the head really tight on these), they have a nice, throaty "growl" that I don't hear in a Whyte Laydie or Tubaphone. If you break the head, the replacement size is 10 15/16" high or medium crown. My '20s Regent open back was one of my favorite banjos.

Being able to tell by the finish who applied it ... I'm once again astonished by your expertise.

I have loaded a pic of the arm rest in my album.

Being able to tell by the finish who applied it ... I'm once again astonished by your expertise.

I have loaded a pic of the arm rest in my album.

The original was made by Elkington (Elton) with two adjustable legs that often broke off. Because of this, many (most?) '60s Vegas no longer have their original arm rests. If unbranded, it was original to a Vega banjo; if stamped Elton, it was aftermarket and sold by music stores.

Around 1974 or so, I bought a big box of banjo parts from a store going out of business. About 30 years later, long after I bought my Pete Seeger, I was reading an article about these and the picture looked familiar. In that old box were two of these, one stamped Elton and the other unstamped, now sitting on my '60s PS5. 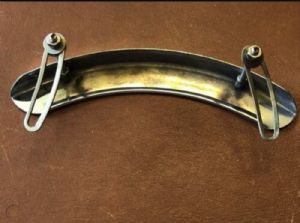 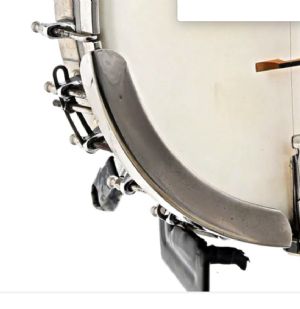 Those Elton armrests are my favorite style. I also have a few British knockoffs of the style.

Deering also makes a "Little Wonder" which was the name (real) Vega used for the tenor banjo of same "ring" configuration. The Deering Little Wonder has a wood rim with no "ring".

So I guess their model names don't conform in any way with (real) Vega.