flight case for a tenor

I've placed a WTB ad in Marketplace looking for a flight case for a tenor. As far as I know only Calton (of old) had made a case sized for a tenor. I really do not want to go the route of a case made for a 5-string with an interior sized for a tenor. If you have one you're no longer using and would consider selling please respond to the ad. Thanks.
If this post is considered inappropriate by the moderators please just go ahead and delete it.

Please call Alan Cooper in Marin County at their west coast office, he works at home up in Bend. He grew up in a musical family.

Leave a msg or Email, he will contact you quickly.

I am a Recording King dealer, so ethically I don't get anything for helping you. Period.

Alan will know which case can help you, not everything is on their website. There are cases that I spec. exclusively because I have ZERO breakage and 100% success in shipping again this year for a decade. I ain't makin breakin'

And if RK doesn't offer, Alan will know who does. They do offer a double mandolin case.

My preference is always away from other peoples' used skin cells and tobacco smoke which , with the mold, helps old instrument cases turn into landfill right there. New is better for the music.

Peoples' lives begin to resemble the banjo they play, I'm writing a joke for the 40 year olds. I have to sometimes say joke because a 40-year old Oldsmobile is a really good banjo mute. Put the banjo in the Olds, shut the doors and windows and hear what happens. Suddenly you have the best little studio you never thought of.

Jackson Brown did this on Running on Empty recorded right there on the operating BUS mute with a bass drum mute made from either a cardboard box, drum case, or other little wooden box. Find out, it's Urban Myth. Don't call Mr. Browne, nor Mr. Haywood, do your own homework.

The high backup is sung by Doug Haywood, who can be seen only once as the folk singer on "The Mod Squad." He was probably 18. They asked him to play something like Bob Dylan. Yeah right. So he intuitively substituted his own song for which he still receives compensation and Zimmerman doesn't. That's fair.


his industry career started right here in Phoenix with his leadership of a bluegrass band which was harder during the Kingston Trio tide, And he was the banjo player.  I apologize, usually the tenor player is the one who goes back after branding the devil and ties the knot in the Devil's tail.  And the Lord now asks the Devil, "What happened, another banjo player????  I warned you.  Now who's my little Satan???

Aside): Try Calling Alan , they can drop ship from Memphis to serve you.

Next: There are hardshell and gig bags which neither should appeal when the Guardian Featherweights with 6" styrofoam under the black zippered nylon are available with useable but dainty backpack straps.  One customer uses one for Banjo on the Appalachian Trail with a two mile Yorkshire Terrier and a 5 mile Yorkshire Terrier, gold hardware for the great outdoors, just like the Firefighter in Alaska, also gold. I don't know where the dogs go after their mileage, but I know they dig it. Dog joke.)

I ship both these and hardshell cases because I can trust them with my technique.
And many of my friends here are converting to lightweight banjo, guitar and mandolin cases because of it being too hot to lug heavy cases in AZ., so everywhere, too. Because my wife and I were picking up her sister at the airport before Thanksgiving and the Cell Phone Lot is so modern, so up to date, that they always forget to look at their own work on the scroll board.

Get in there, dive, dive.
Here's a tease photo. 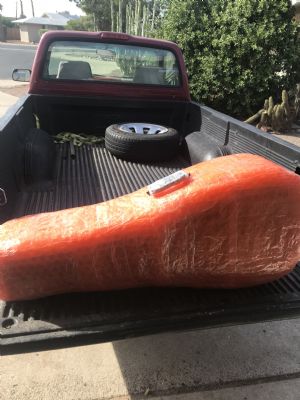 I have a tenor case from https://mainstagecases.com/ - it's essentially a Calton case, but I got a deal on it as it was a custom job someone returned. Great folks to deal with and the case has been to hell and back and still in great shape. It's a heavy sumb**** though.

'Only Love Can Break Your Heart' 35 min

'What are your favorite banjo finishes?' 3 hrs