Personally, I would stick with MD Anderson in Houston.

Calvin Trillin said that his idea of "alternative medicine" is a doctor who didn't go to medical school at Johns-Hopkins.

What do you guys think of Rick Simpson Oil?  book review on amazon   and WebMD's take WebMD

Here is a case where an amateur invented a topical ointment, gave the formula away for free, and users began finding all sorts of new internal uses.

Personally, I would stick with MD Anderson in Houston.

That is a free choice.. i do not advicate..one way or the other..

Just another avenue to look at..

For folks to look at n decide themselves...

If conventional methods do not work..in ones case..

With no side affects that i know of..

Al: "If conventional methods do not work..in ones case... Or..board Dr.s...say there is no more that they can do."

In other threads I've asked what others advise/advocate in such situations, for any medical issue, not cancer in particular, but get no [relevant] responses. I'm interested to see whether or not you have better luck.

Nope not for me Al last time something came from China it didn’t fair well.


Not all people may be awear of this alternitive..

Lately...i have had skin cancers removed...

Had friends with pancreatic cancer..n the Dr.s...said nothing we can do...
Just go die...

What do ya have to loose at that point..?


Not all people may be awear of this alternitive..

Lately...i have had skin cancers removed...

Had friends with pancreatic cancer..n the Dr.s...said nothing we can do...
Just go die...

What do ya have to loose at that point..?

If the disease is diagnosed as incurable, all you have to lose if you try these alternative treatments is....... your money and possibly your life.    And maybe one of these  treatments would help, give a person more quality of life and/or more time on earth to prepare for the inevitable.

Having said that, if someone wants to try something else, then they should be able to do so without others disrespecting their ideas.

I believe it’s better to be pro-active and take whatever well-researched alternative medicine you find might be helpful. It’s also helpful to believe in their healing properties, , as you know I’m an advocate of positive thinking and the law of attraction.
I take black seed oil , turmeric, quercetin, fish oils, organic cruciferous vegetables, eat a low carb diet, and I do intermittent fasting 4 times a week. I eat very little red meat and no deep-fried foods,, no refined sugar, no starches, & I ain’t dead yet…. lol. Actually all my cancer checks, blood work, scans, MRI’s have been good this past 15 months. I was on chemo pills for 6 months - finished up in March. There is some quackery out there but it’s up to the individual to try root it out before taking anything, I suppose.

Personally, I have seen far too many examples and have known way too many people with first hand experiences that cannot be denied. Rather than blather on and try to reconstruct some stories here's a video which is worth watching, it's from a YouTuber who does do-it-yourself repair videos and he seem to be a real and humble guy. But he was faced with a life and death situation with his wife and here he tells how he dealt with it.

(In re-watching the video after a few years now, let me say, I'm posting it more to show how someone took charge of their own health when faced with a terminal illness, and not any endorsement of his ideas which some may find to be outside the mainstream...)

My mom was diagnosed with lung cancer although she never smoked and had no complaints that would be lung related. She did have a few bouts of pneumonia later in life. The cancer diagnosis was based on a x-rays which showed freckle-sized spots and a biopsy determined it was some fancy thing that had to be treated. The prognosis was about 5 years at best. So they blasted her with chemo for the next 10 years or so. Thing is, she never, ever suffered from ANY symptoms from the disease -- no coughing, no shortness of breath, no pain, nothing. She *did* suffer a lot from the treatments. They continued to monitor and after many years the spots had not grown or shrunk so then they upped her to some experimental use of some other drug. I'm sure her being used as a guinea pig was worth a few $$ in pharma research money. All for spots and no symptoms.

What I always find amazing is that everyone I have ever known with cancer, got not one bit of guidance, zero, from their doctors about diet, what to eat or not eat, nothing at all. As if they're not connected in any way. Stunning. Maybe that has changed lately.

There is no magic bullet. At the same time, many credible things that have been around forever, should not be ruled out, either. 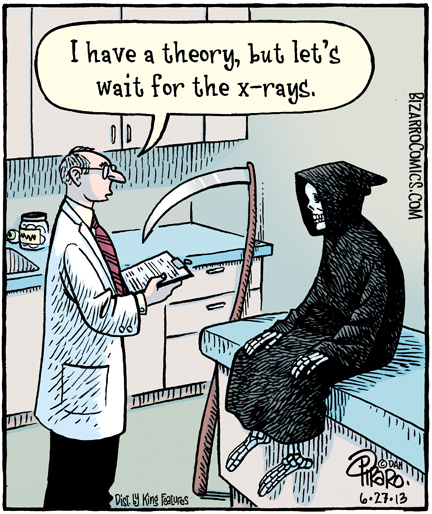 I had a chemo injection twice...that lasted for 3 months each...then 45 radiation treatments (5 days a week for 9 weeks) with no ill effects.

As far as "alternative" treatments...paying for them would be out of pocket, so I would not risk bankrupting my family for something that is very likely snake oil, and could end up ending my life even sooner, or making the current situation even worse.

That all said, Oregon is a "death with dignity" state (medically assisted suicide), so it is something I would consider as well.

As with a do not resuscitate order and extending life support...at some point, when it's over, it's over.

I have no problem with alternative medicines or treatments that anyone wants to use. I have a problem with people who offer them that prey on vulnerable people who have run out of other options, most likely when there are no other good or viable options. Way too often, all they really offer is a false hope that they will be cured.

I have told the story before about our housekeeper who was taking "alternative" cancer treatments from a quack doctor in the mountains of North Georgia for $200 a pop. Her good friend called and asked if we would give $200 for another treatment and I said absolutely not, but would be more than happy to contribute and amount to her treatment at our local cancer center. The $200 the doctor was taking for a sugar water injection (or whatever it was) was stealing plain and simple. There is a special place for those folks!

The biggest danger I see in alternative medicines and therapies is the attraction for people that don't want to see a real doctor.
Precious time is easily lost.

...and speaking of precious time, about 4 or 5 years ago my neighbo(u}r went the conventional route throughout one fall and winter.  With spring came the diagnosis .... cancer ... about 4 weeks to live.  The estimate was just about bang on.   When he questioned the doc, he was told, "We try, John, but we don't catch them all."

It reminds me of a promotion the Winnipeg Free Press ran back about the same time in conjunction with the "Ride For Dad" fundraiser to fight prostate cancer.  In it a woman gave the story of how her husband had succumbed to prostate cancer even though he had followed the recommended regimen.... and she ended off urging men to make sure they followed the recommended regimen.

I'm not denigrating the conventional approach.... just noting that things don't always go according to Hoyle.  [...And putting in a plug for extrapolation.

Many are all too ready to take money from the desperate. Think of Laetrile.

I've known many natural healers in my life, and anyone who is the real deal will never, ever claim superiority over anything and would never ever tell you to not see a doctor. Anyone who does that is a quack for sure. Kind of exactly what the medical profession does, right? (don't believe anyone but us! but still...) The healers I've known would treat you for money or not, I knew one guy who took a live chicken in payment and that was his meal (he knew how to chop their head off and all LOL). And not one of the ones I've known ever advertise or try to solicit people. That's the real quackery. I see that a lot on TV and YouTube. Snake Oil is a thriving business to this day.

Jesus Christ was an herbal and hand-ons healer. There are plenty of examples in the bible about all that. It's right there and even the herbs and plants are sometimes named. It's nothing new. Charlatans have been around just a long, That's nothing new, either. What's been lost along the way is how to tell the difference.

Like my trigeminal condition. I've sought MD help, neurologist help, dental help, and acupuncture. I've had CT scans, blood tests, biopsies and the whole nine yard. I've not given my well-being over to any one area. But for me, the results have been real with acupuncture when the medical professional just rolls their eyes at me about that, as if it's some weird voo doo or something. It's been a real eye-opener educating my doctors about this LOL!!!

'Battle of New Orleans aka Eighth of January' 1 hr