Who Invented The 5-String Banjo? When?

That is - The common old-fashioned 5-String many of us uninitiated visualize when we hear about the antique gay nineties banjo.
Open back.
22 frets - 3 octave neck.
11 inch skin head (or thereabouts).
Metal brackets around the head.
4-pegs up top - 1 peg on the side for the short string.
See attached for an example. 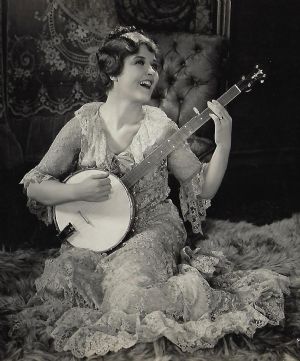 Laura LaPlante!! Sorry to be distracting, John, but I just noticed the banjo. :)

I would guess many of these "standard" features arrived at different times.

George is right, of course. The "modern" banjo evolved; it was not invented.

how many licks to the center of a tootsie pop? the answer to your question is the same...

Since you did not stipulate raised frets...  I'll write to that.

The next concrete reference I have for a three octave neck was published in the late 1870s by one S. S. Stewart and this time for raised frets.  The original document is not mine to share but I can quote it:

"Much has been said and written about raised frets on the Guitar and Banjo: some contending that they add to the tone of an instrument and other that they do not.  I am of the opinion that raised frets are preferable, especially in a large instrument."

In this same circular he says that he recently started using a scale of 21 raised frets.

In another circular, from about the same time of 1878/1880 SSS wrote "Raised frets are preferable to inlayed frets... A good banjo if fretted should have twenty-two frets, and each should note perfect."

But WAIT! you might exclaim. Stewart was strongly anti raised frets until well into the 1880s! you will yell shoving copy after copy of the "Stewart Journal" into my face.  And you would be 100% correct.

I have a theory that string manufacturing was the reason behind the 22 fret neck coming and going and coming and going and coming again. By the late 1890s/1900 when the 22 fret neck begins to become somewhat common, it was at the same time that manufacturing of strings got better.  String makers could now rectify strings to be true and then varnish them so that they would stay that way (for a little while anyway).

In order to prevent the constant complaints about "the fret scale being off" by beginners and tyros, SSS (and others) did not make banjos with 22 raised frets.  Problem solved.  During the 1880s SSS (and others) were like "I recommend a smooth fingerboard, but if you want frets you are on your own-- don't say I did not warn you"  Eventually the demand for raised frets won, and despite SSS' insistence that smooth arm banjos were better, raised frets became the rule (yet another example of banjo manufacturers controlling nothing).

Now, let's discuss the formula of 11 x 27 with 22 frets (more or less on the size).  SSS' Universal Favorite was this size.  He was not the first, as 11" banjos were quite common by the late 1860s and through the 1870s.  But his Special Thoroughbred with 11" rim seems to be the direct inspiration that other manufacturers copied.

Joseph Rickett, (SSS took lessons from him) was selling raised fret, 11" banjos in the late 1870s, the example I own has 20 frets.

"Invented", nah, not that easy.  "Developed by trial and error over decades", now that is more like it.

One other point, the banjos followed the music.  By that, I mean that music changed and the manufacturers followed with "improvements" to make banjos more user friendly for the music that people wanted to play on them.

This can be easily supported by the fact that mountains of music was published that tell this story.  Only only needs to read through them chronologically while considering known examples of banjos from the year published.  The timeline is clear.

1893 is a notable year as a few things happened.  While E. M. Hall's Blue Ribbon March was published in 1891, other solos were being published in the early 90s that used the high C, among those was L'Infanta March in 1893.

Also in 1893 was when SSS worked with Alfred Farland to come up with the "Special Thoroughbred"-- a "Special" sized banjo (pitched one step higher than standard) with a three octave neck.   It is shortly after this that SSS introduced the ST in 11", then in all sizes.

Joel Sweeney of Appamatox VA is commonly credited with making the banjo instrument a "5 string", circa the 1830s to 1842 or so.  By adding an additional LONG string, not the short string which came from Africa on the early gourd-bodied instruments.

The way I tell the story is:
Somebody was making a banjo out of a gourd and branch and a possum hide, and stringing it with possum gut strings.

They got it put together, realized they had about a foot of gut left over, and decided not to let it go to waste.
But, since it was too short to go all the way up, they put a peg partway up the side, and the idea caught on.

.......  reported that JOEL SWEENY added the 5th string, and he was so good, he sounded like an entire band.
And that's why the instrument is called the "BAND JOE".

With all due respect to a giant of the radio, whoever did the research on that story was full of 5H|T.

Thanks joel for your explanation. From your earlier threads I thought the likely suspect "inventor" of the ubiquitous 5-String Banjo described and depicted above would be S.S. Stewart and his Special Thoroughbred 1896. But, as I was musing I thought perhaps there was someone earlier that might get the cigar - like A.C. Fairbanks or someone else on the list of Classic Banjo Manufacturers (attached - from "Banjos The Tsumura Collection red book). I've read that Ragtime music was beginning to become very popular mid-1890's and "At A Georgia Camp Meeting" came out in 1897 with "A Hot Time In The Old Town Tonight" published 1896. I was thinking that a banjo manufacturer in tune with the popular music of the day might have conjured up the OP "typical" 5-String Banjo to appeal to banjoists wanting to pluck some of the top ten songs coming out of Tin Pan Alley. Thanks again for your response. I'm always hoping there'll be "THE GUY" & "THE YEAR"! 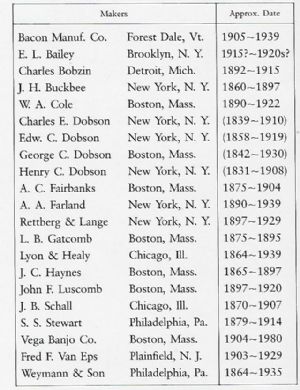