Has anyone ever purchased binding from Aliexpress? If so, how good is it to work with? I am thinking of getting some for some projects. Sourcing from the USA is prohibitive in terms of cost.

I ordered something I can't remember from them a while back—probably guitar binding because there are no hazmat fees for celluloid from them—as I remember, I had to use a secondary email address because of some problem.

A couple of days ago I tried to order a bunch of wood purfling and bindings from them, got it all in the cart but could not get past the checkout because they said they already had my email on file and every password I tried with 2 email addresses was "invalid" despite getting reset codes sent by email. I tried three times and finally gave up after wasting 1/2 hour. They have no simple "checkout as a guest" function on their site—you MUST set up an account with a password.

several days later I got an email from them telling me my order would expire in a couple of days and did I want to cancel it?—I said yes. I wanted to say "because of your dippy website".

I still get coupons and come-ons from them, but doubt if I could actually order anything, and I don't want to waste any more time.

Yes - several (12+) purchases and no problems. Don't expect them to "work with you," but notifications are regular, routine and automated. Never had an order lost, so I have no experience with that issue.

Okay source for cheap parts. Some small stuff arrives in as little as ten days. Large heavy stuff that goes by ocean freight can take 3 months. The only bad experience I had was ordering 15 5th string tuners. They arrived in ten days and somehow were geared backwards so they tuned the wrong way. Aliexpress is where many of the Gibson and Rickenbacker guitar forgeries come from. If you see a listing and they show every part of the instrument except the logo on the headstock, that is the wink-wink that you will get a guitar with a famous American maker maker logo on the headstock of an Asian made guitar.

But I've ordered and used binding from Chinese sellers on eBay. It arrived fine -- also no extra shipping charge on ivoroid. And it worked fine.

Even though I was buying through eBay USA, these orders were shipped direct to my home from China. I've bought several things on eBay that shipped right to me from China at extremely low cost. Sometimes it was even "free" shipping within the price of the item.

I use them all the time for things. I only had one 'bad' experience and that was with a seller who in my opinion, misrepresented the item I was buying. Putting that aside, how were the products (especially the binding)? Was it up to par when you used it?

I notice that practically everything they sell is also available on eBay,often with free or minimal shipping—at least the purflings and bindings.  It probably comes from the same suppliers.

This brings up another question, not to drift the thread, but why can these people ship stuff from China and Taiwan with minimal shipping cost and many companies won't do that here?  Many's the time I have tried to buy something on line that weighs a couple of ounces, like a router bearing for example, and balked when the shipping cost was more than the product.

I notice that practically everything they sell is also available on eBay,often with free or minimal shipping—at least the purflings and bindings.  It probably comes from the same suppliers.

This brings up another question, not to drift the thread, but why can these people ship stuff from China and Taiwan with minimal shipping cost and many companies won't do that here?  Many's the time I have tried to buy something on line that weighs a couple of ounces, like a router bearing for example, and balked when the shipping cost was more than the product.

China is considered a "transitional" country.  When shipping to a country like the US they get very low rates.  I have also read that some of the cost of offset by Chinese government subsidies to help with and normalize direct sales.

I've only had one experience with Aliexpress.   I bought two aluminum combs for Special 20 harmonicas.  I only got one, and the thin plastic bag they shipped them in looked like it had been sliced open with a knife-- perhaps inspection, but not sealed back up.

The one I did get is very nice and perfectly machined with no tool marks visible on the exterior areas.  It was not that much of an improvement over the stock plastic comb, but the product was good.

I filed a partial missing item complaint and the seller rejected it but Aliexpress refunded my money almost immediately.

While one is buying from the knockoff/counterfeit capital of the world, with all the moral implications that go with that, my single experience with the company was good and I would feel comfortable buying through them again.

Thanks for the responses. Apart from experiences dealing with Aliexpress, I wanted to know if anyone have purchased binding and if so was it up to par when installing it?

How about hardwood binding?

That would be my assessment as well. It therefore all boils down to price.

How about hardwood binding?

They sell a lot of hardwood bindings, purflings, guitar rosettes, and marquetry.  The identical stuff is also available by sellers on eBay, probably made by the same people.  I have used several different kinds and found it to be perfectly good.

That isn't my question, Ken.

I would rethink using celllulose and replace it with hardwood. Gold Tone did it. And source it here.

"Just as good and cheaper." But the cost of the fuel to import in shipping containers and watch them bob around in the harbor, is something I avoid.
We couldn't get resonators for a while because of a little disagreement with China. Then the Covid hit and we waited.

Wayne Robinson, I think you would do better with hardwood binding from NZ. Make it yourself. My negative experience with another importer was that they used the same envelope I mailed to them to replace something that was missing, then the parts got lost in the mail. I had to scold them in a cultural fashion, saying they had disgraced themselves by not purchasing a separate mailer, which they finally did. I became much more self sufficient and went in the Made in USA direction.

That isn't my question, Ken.

I would rethink using celllulose and replace it with hardwood. Gold Tone did it. And source it here.

"Just as good and cheaper." But the cost of the fuel to import in shipping containers and watch them bob around in the harbor, is something I avoid.
We couldn't get resonators for a while because of a little disagreement with China. Then the Covid hit and we waited.

I don’t think of Gold Tone as a poster child for “made in the USA”, and I also don’t think there are container loads of guitar binding getting stuck in the Suez Canal or elsewhere, but that's neither here nor there.

I do agree wholeheartedly with making it yourself as you suggest and I am certainly an advocate of making my own bindings, believing that if you are going to “make something” you should actually make it rather than buying a lot of parts from other people and assembling them.

The other thing is that if you make your own, they won’t look like everybody else’s.  While the factories normally use plastic because it’s easier to do, the better high-end guitar builders make their own wood bindings, rosettes and trim.  I don’t think that happens as much with banjos where there isn’t much trim.

A lot of the stuff you can buy from Ali Express or ebay is pretty simple to make, but time consuming. I make wood bindings in a number of kinds of wood and make some with edge banding. 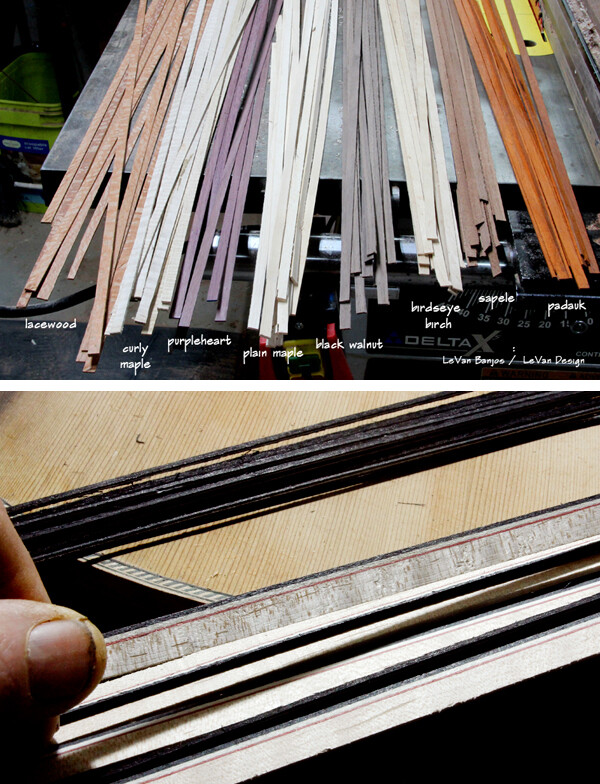 These are used on banjo resonators, banjo lutes and guitars, and I make my own resonators as well, so I don’t buy them from anyone. 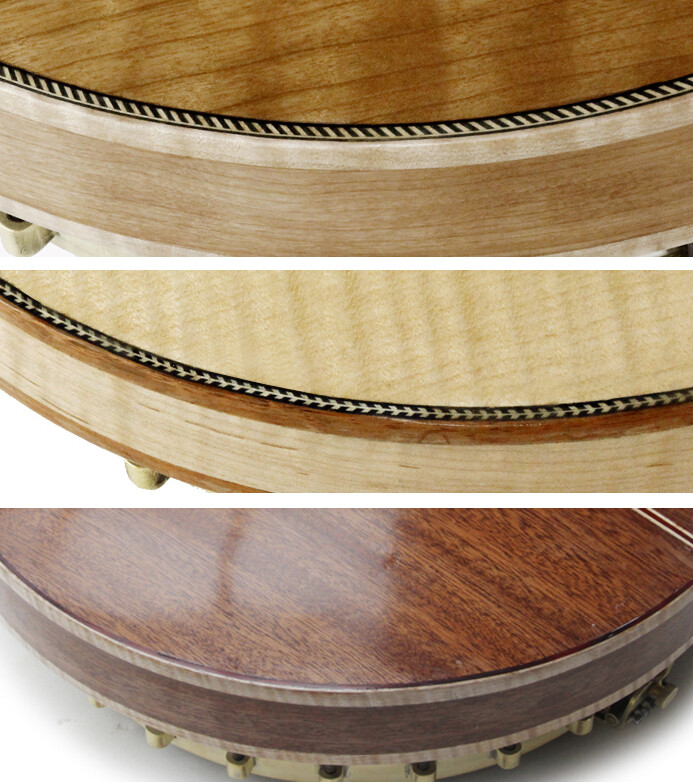 It’s very difficult to make them without special equipment, and some of them designed to be bent around curves, like the herringbone and rope are classic traditional designs that have been around for over 150 years, so there’s no point in attempting to make a new version—you would not be bringing anything to the party, hence I buy them.

The better guitar makers also make their own rosettes—it’s part of the tradition of being a luthier—almost an obligation of the craft, so I make those for banjo lutes and guitars. The ones they sell on ebay are the wrong size for steel string guitars, anyway—these are more complicated to make than straight bindings. Sometimes I incorporate split herringbone into the design. Anyway, the stuff I buy from the overseas people is the herringbone, rope and abalone pieces. Also, much as I like wood binding, I still use celluloid or Corian for fingerboard binding because the wood is too fragile and “splitty” (to me) for something that gets the wear and tear of a fingerboard edge.  I also think there is a place for ivoroid and tortoise shell celluloid for some instruments in the tradition of the factories like Gibson, Martin, all the old Vega WLs and TuBaPhones, etc, and you can’t make that stuff yourself.

Ken Levan Thanks for the hardwood lesson. I thought this was about cellulose. No, Gold Tone is just who they are, they make innovations and work with an international partnership with on shore American Jobs, no poster child implied, those were your words.
I have cellulose binding cracking from 2005. I don't care where it is made.
Ken, why don't you drift another thread and show us how pegheads are glued on, with binding. that would allow you to drift all you want.

You use your whole name as an avatar, I use Helix, don't get personal with me.  This is just a forum, I'm happy to watch your progress.

Exaggeration and implication do not a banjo make.  I'm interested in supply of all kinds of luthier stuff.  So is Mr. Zimmerman, "cheaper and just as good."  "Tastes just like chicken."  Time fades all banners.  Banners are personal hype.  Personal hype is like two tablespoons of wishful thinking

I was chided for needing some new photos,  that absolutely delighted me to know you actually looked at the chronologically presented progress with nature photos taken right here in the public flyway.  I'm just more amateur with my photos,  I'll ask the user's group how they feel about "sound"  or "photos."

Time to make the banjos.

Look who is talking about drift!

'I knew there was something to it' 1 hr

'Bob Flesher has passed on' 4 hrs