Can you help ID this no name banjo?

I recently picked up this 19-fret tenor banjo. It has no name, no number. Anybody recognize it?

We could use pictures to make this investigation do you some justice.

I looked at your photos in your home page.
The flange is a Kay. Hard to see but the pearloid peghead looks like a "gumby" Kay the shape of which was introduced to the public with Kay's KayKraft banjos in 1931. Maybe you could Google KayKraft banjo to see if your peghead is the same as the 1931 KayKraft banjos to confirm the identity of your banjo.

I worked and lived in Santee back in the day.

Kay flange for sure, but I don't see a pearloid peghead nor the "gumby" shape.

Not a Kay flange. The Kay had slots and holes, not diamonds and holes. As soon as my image library finds a match, I'll post it

The Kay Diamond Flange was a little more fancy than the Kay dot-dash flange but to me it is a mystery when Kay decided which one to use. The dot-dash seems to be more common. 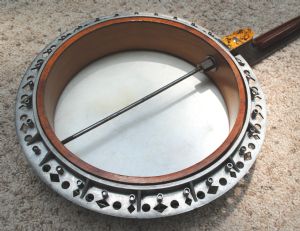 i've seen both flanges. There are, and probably always will be, mysteries with Kay banjos. They didn't use serial numbers, and catalog descriptions and depictions were sometimes out of date.

Oops, on second look I posted the wrong Kay flange. Here attached is the Kay flange that I think matches the OP banjo. But the attached banjo may be a Stromberg Voisinet which, I guess, muddies the waters somewhat. We might know more if we had a photo of the OP banjo's peghead. 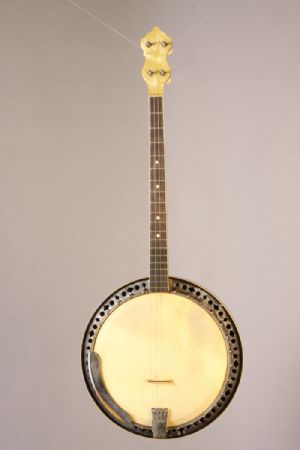 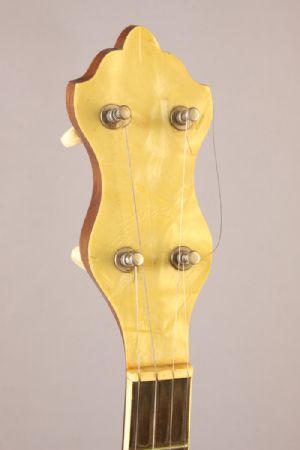 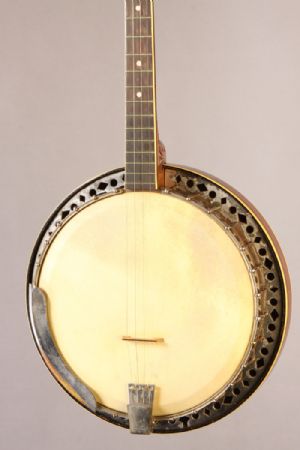 The Kay 'diamond flange' has 30 brackets and was used on their top end banjos like the Jose Silva models—I've never seen one older than the 1950s. The holes and slots flange has 20 brackets and goes back to the SV days, some with dowel sticks.

Headstock shape means absolutely nothing when trying to date a Kay.

OK, it seems to be going in the Kay direction. The computer told me the photos were uploaded, but apparently not so much. I'll shoot more pics with and without the resonator. I'll get my grandson to help me with the technical stuff.

Thanks for the comments. I'll get the pics done tomorrow.

OldNavyGuy, where were you stationed?

OK, it seems to be going in the Kay direction. The computer told me the photos were uploaded, but apparently not so much. I'll shoot more pics with and without the resonator. I'll get my grandson to help me with the technical stuff.

Thanks for the comments. I'll get the pics done tomorrow.

OldNavyGuy, where were you stationed?

Worked at a company on Olive Lane in Santee, and lived not far from Santana High School (daughter graduated from there).

Did you do BUDS training at Coronado?

Kay made banjos that were sold as house brands. Big retailers would buy them and market the banjos under their own name. Sometimes the peghead face was left blank, as it cost extra to have the house brands name included on the banjo. Some dealers popped for the extra cost, and others didn't.

Pearloid was perfect for covering up all the Kay markings. All Kay had to do was glue the pearloid sheet on; the stuff didn't need a finish on top of it to protect it.
Other big banjo makers did the same thing too.
regards,
stanger