hello,
Preparing to drill the hole for the 5th string tuning peg. Must say that I've noticed on one banjo, that the centre line of the 5th string peg was "angled" slightly towards the peg head. Just curious if the 5th string peg on your banjo is similar, and if that is the way it should be done?
thanks for replying,
#2

They should be straight and deep enough so the string follows a straight path to the pip.

You can insert the 5th string tuner so's that the string post is angled 2 or 3° towards the peghead, however, as Mr. LeVan states, the hole is drilled straight into the neck. 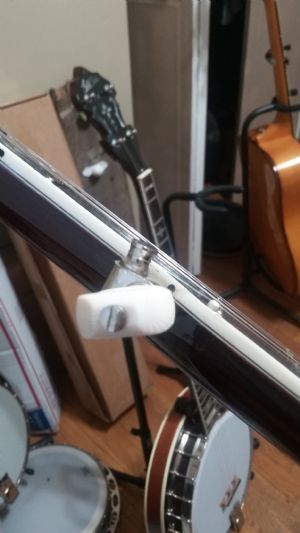 I have no idea if correct or not, but I try to install at a similar angle to the peghead angle and so far, it has worked fine for me.

Fifth string tuner on a used Rover RB-35 I just bought for travel/knock around use is installed straight up and down. No back angle. I generally don't like that, but can't decide whether it's worth pulling and reinstalling with the angle I prefer to see. The fifth string pip functions only as a guide, with the string resting on the fret. The string has enough down angle to the post to sound OK. Don't know if more angle would be better. Maybe leave well enough alone.

Anyone installing new, like JJ here, has the opportunity to do it right from the start.

'Which epiphone is this?' 3 hrs

'What Do you Think About' 3 hrs