Subject line sums up my question, which I know has been asked and answered before. Just want to be sure I'm covering all bases.

Bought a Rover RB-35 on eBay to take on a schooner cruise off the coast of Maine a few weeks from now. Barely used condition, but needed some minor repair from either a bump during packing or maybe it being a second. More on that some other time.

Question for now is I might want to replace the guitar-style tuners with inexpensive planets. I have not removed any tuners yet and don't know the size of the holes with bushings removed. I assume some enlarging will be needed. No idea how much.

What's the best or safest way to do this?

I'm thinking drill press and sneaking up on the needed size in increments. Drill from face or back? Tape to protect against tear-out? Clamp to table to assure accuracy and avoid movement?

Previous discussions have also suggested sanding with moderately coarse grit paper wrapped on pencils or dowels.  I can't imagine that's very quick. But I have time.  Or filing? I have a couple of rat tail files, maybe a rasp. Don't know the sizes off-hand. Probably would not give me perfect circles.

Oh! I just remembered I have a Harbor Freight reamer I've meaning to cut off for making/sizing fifth string tuner holes, but haven't got to yet! It's tapered, of course, so is the proper technique for using that to come in from both sides for a more cylindrical hole? Then finish with sandpaper?

I have a spindle sander, but I can't imagine that's the way to go.

I might not even bother. The guitar tuners work fine. I just like the look of planets. Can't get to this until first week of October. So there's time to decide. I can have tuners in hand before then.

A Drum On A Stick

Newbie here, but my 2c since I got here first:

Since you have it, I'd use the reamer and come in from both sides for a mostly flat-sided hole.

I recently did this with a step drill bit. Same idea, came in from both sides bit by bit.

Approaching from both ends is especially important with a drill bit to prevent tear-out. I think reamers are pretty safe from that perspective.

Though once you get the current tuners out, you might find your issue is shimming rather than reaming!

Best approach is to glue doweling in the existing holes then drill the needed diameter using drill press and a brad point drill or a forstner bit. Drill from one side until the pilot point just begins to emerge, then turn over and finish the bore. Get the tuners first so you can measure them and get the correct size drill; either 3/8 inch or 10 mm depending on the make.

Use your reamer from both sides (safest way possible), clean up the center with a round file of sandpaper on a dowel. Step drill would be my next choice.

Enlarging a hole with a regular bit always has a tendency to grab in wood and can be a quick way to disaster.

Look again at the part where you say "The guitar tuners work fine. I just like the look of planets."

How much time, effort, and money do you want to expend, changing something that works well, just for the sake of appearance?

During his early success, crooner Tony Bennet was offered facial surgery, to reduce the size of  what the STUDIO BOSSES considered to be his enormous beak.
He refused, on the theory that the total airway configuration just MIGHT be the secret to his total sound. 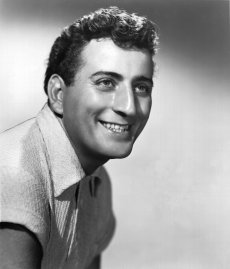 He was still sounding good into his NINETIES! 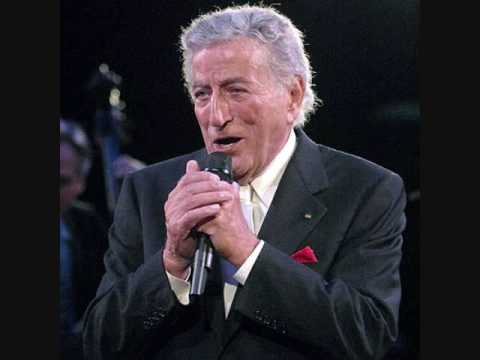 I also recommend a reamer from both sides, followed by a round file.
Experience has taught me that it's the safest method by far.
And it doesn't take very long.

I totally agree with the reamer from both sides approach.  The tuner body on the bottom and the washer on top cover any slight hole-size vagaries, and you want it to have a little clearance anyway.

If you do want to drill the holes, it might be best to use an end-mill instead of a regular drill bit - less chance of tear-out.

Oops, forgot: when using an end mill your work must be solidly clamped down. Low pressure to go in and use a piece of wood under your work, no tape needed. Going in from front or back don't matter with end mills.

To enlarge the hole, wrap sanding paper around a drill bit and put it this "tool" in your drill press. Use the up/down lever to mimic an oscillating sander.

Thanks for the suggestion, but I don't have an end mill, don't know what it is, so I think it's safest for me to use the reamer followed by a file. If I decide to do this at all.

I clamp a plate on the back and drill for 10mm 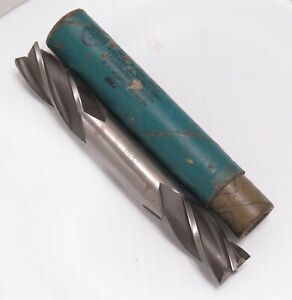 In what kind of tool do you use an end mill?

Probably have to decide today or tomorrow whether I'm doing this so I can order tuners for delivery in time. Banjo is sitting on workbench a few days while touch up finish cures for polishing. I'm away, so I really will be leaving it alone.

Ken, you asked for the safest way.

You will be doing yourself a big favor if you use a reamer and file instead of end mills and/or drill bits.
The chances of slipping up are much smaller.

It would, however, not be a bad idea if you later wish to change tuners on an expensive banjo. There's nothing better than practice.

Definitely agree that the reamer seems safest. And I wouldn't be surprised if one of my sanding cylinders can be used manually in place of sandpaper on a dowel or pencil.

But starting to lean toward not doing this before the trip.

I agree with mike gregory, if they work fine, leave then as is. Maybe use the money to upgrade the hooks if it is a model with the thin, flimsy hooks that tend to straighten out with tension. 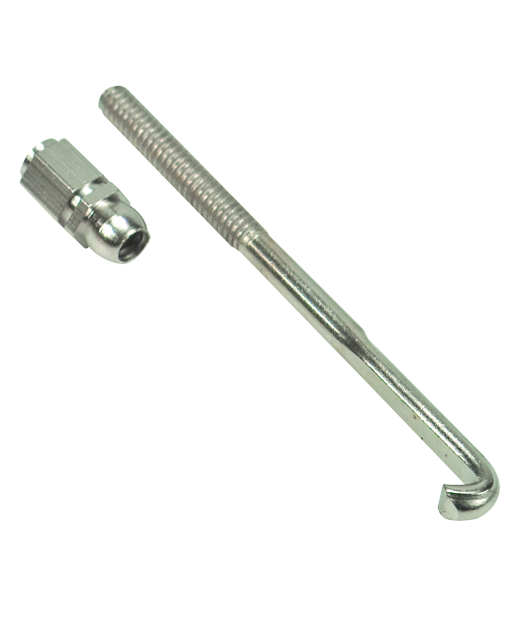 I'll replace down the road if the stock parts don't seem up to the job. The head is a Taiwan Remo, made with the crimp connection, which I think can be tough on weak hooks.

Overall, it's a pretty nice beginner instrument. No longer made. 3/16-inch aluminum rim with an integrated tube-like bracket band that functions like the tube of a two-piece flange. It also has a flange plate, which can be removed to convert the banjo to open back. Unique design fairly substantial grooved tension hoop that appears to have been made just for this model. While some of the published specs say 11-inch rim and 25-1/2-inch scale, it's actually 10-7/8-inch rim and head and closer to 26-3/8-inch scale. Plastic nut and plastic fifth string pip that functions more as a guide for the string resting on the fifth fret.

I have done this with drill bits without tear out by drilling in REVERSE.I drill from each side ans meet in the middle.

What I do when I replace tuners is measure the part where the tuner goes through the peghead. Measure the hole that exists from the old tuners. I use metric drill bits of 0.5mm increments in my drill press to enlarge the holes to the correct diameter. DO NOT use a hand drill to do this. You need something that drill perfectly perpendicular to the plane of the peghead.
Remove the neck to complete this.

Well, it's always something.

eBay seller saw I had looked at some low-cost tuners without buying and sent me an even lower asking price. When we got back from a visit with the kids and grandkids, I had time to swap out the tuners.

I used the reamer and, having never used this tool before, took my time. Took maybe 25-30 minutes to do all four holes, reaming from both front and back. First hole took the longest as I was being most cautious. My biggest fear was I'd press against the peghead and snap it off.

I reamed each hole to make it just large enough for the portion of the tuner that's inside the peghead. Face and rear are covered nicely by the washers and housings.

But here's the problem:  I did not measure the peghead and was not aware that it's over 0.6-inch thick. The tuners are apparently designed for maybe 1/2- to 9/16-inch thickness because on this peghead the bottoms of the string holes in the tuner posts just clear the face nuts.  See attached photo.  It will be tricky -- but not impossible -- to wrap the strings. They just won't wind down the post. I can do this. I know how to install and lock strings so they don't need many windings.

I guess I have three courses of action:

1 - Do nothing. Live with the tuners this way. Strings are arriving in today's mail, so I'll have it strung up tonight. As long as I can string and tune the banjo, I'm definitely doing nothing else with the tuners before next week's schooner cruise for which I bought it.

2 - Counterbore the back of the peghead to inset the tuners and gain height on the face.  I've found references to this in the archives.  I assume that requires a drill bit that cuts a flat-bottomed hole exactly the diameter of the tuner housing. I don't have such a bit.  I'd go 1/16 to 3/32. But this seems like a serious thing to do.

3 - Put back the guitar-style tuners.  This would require lining the now-enlarged holes with veneer or plugging them and redrilling. To put back tuners I wanted off in the first place. That sounds like something I'm not even going to consider. 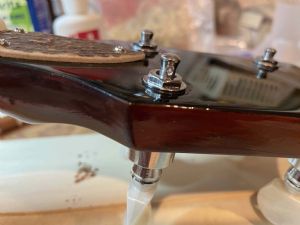 Option 4: Those washers are 1/16 inch thick: Replace them with thinner ones. You should be able to find washers 1/32" thick, maybe a bit less.

I have done this with drill bits without tear out by drilling in REVERSE.I drill from each side ans meet in the middle.

I've been doing that for 50 years or so without a problem.

Option 4: Those washers are 1/16 inch thick: Replace them with thinner ones. You should be able to find washers 1/32" thick, maybe a bit less.

I'm certain that somewhere in my parts collection I have extremely thin washers or trim rings that go with output and input jacks. Those might be as thin as 1/64. So as you suggest, they'd free up half the thickness of the current washers or more

If I can find those washers and if they look to be stainless or otherwise bright, I might install them. If not, the tuners are working.

Chances are they'll work just fine without them washers...

'1967 Video Tour of the Gibson Factory in Kalamazoo, Michigan' 9 hrs