Curious about the impact of the choice of neck wood, I negotiated identical CNC neck milling of four different kinds of wood. I mounted them on the same pot, with the same set-up, and recorded the sound. The sounds of played music selections and single plucks are linked in "Four Banjo Necks and One Pot" at  http://www.its.caltech.edu/~politzer/; see NEW IN AUGUST 2022. There are also graphs of a variety of computer analyses of the pluck sounds. The write-up contains no physics because it's just too complicated. Everyone will have their own opinions and conclusions -- to which they are entitled. If you can't imagine reading about fifteen double-spaced pages that describe how it was done, you still could listen to the sound files and look at the figures if you're at all interested.

The music files include ones labeled by wood type and others that are unlabeled. That offers opportunities to test whether you can hear differences and whether you can distinguish which is which. 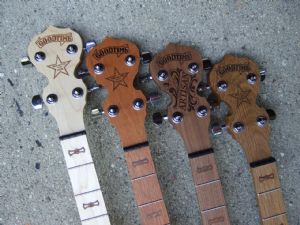 Something that needed to be done, and I'll admit I didn't expect to hear much difference—it's very subtle.

I listened to them all, some several times, I had a hard time hearing any difference in the frailing ones, maybe because I am not attuned to that so much, so concentrated more on the finger-picking ones.

I tried to rapid switch between the short finger-picking ones as if they were strung together, then did the same with the longer samples.  On my crappy speaker, I kept hearing more "life", for lack of a better term, on the maple one, but that may have been my subjective mind at work.  I could hear the same thing on the blind ones.

I was surprised by the grain direction on the end-view shot, although that would have no affect on the sound, which is the subject of this paper.

Based on the deflection graph and weights, it seems to me Deering is using sugar maple or some hard maple instead of red maple.

I wonder what would happen if the necks had slightly different profiles, compensating for the different densities of the wood, so as to have all of them have the same weight?  I realize that's a pretty compulsive "luthier" thing and these were made on a CNC in a factory—it probably wouldn't make any difference anyway.

Thanks for doing this!  I am thinking of getting better speakers for my computer so I can hear them better.  These are the same wood species I use for necks, except I use red oak instead of white oak, and cherry.

There's plenty of advice in the text regarding listening. Indeed, the distinctions are probably clearer for everyone with the picked samples, rather than frailed. And for most folks, listening to just a couple of seconds at a time and going back and forth between necks really helps.

The point of the grain in the end-view photo is that its orientation will most certainly impact the neck's flexibility because the bending stiffness is quite different in the different directions relative to the tree. (Violin luthiers are much pickier about how their lumber is milled.)

A very different kind of experiment, described in section VI , was done with a proper resonator banjo with an ebony finger board and a truss rod. Those features will certainly reduce any impact the rest of the wood might have. That experiment relies heavily on (well-established) theory, but it was only done on one maple-necked banjo. In that case, it seemed that the neck was indistinguishable from a neck that didn't vibrate at all.

'Somewhere Over the RainbowâBanjo Lesson' 3 hrs