Does "Classic banjo" count as an old time style?

Curious if the finger picked style from the 1930s played on 5 string banjos with nylon/gut strings (also known as guitar style), counts as an old time style. Does anyone play this style here? Is it usually played on open G or is there a different tuning? Any other interesting facts about it?

I think most people, especially classic banjo players, will count classic banjo as an own "style" or "genre". There are a lot of differences both in the music structure and the playing techniques. But there were some old-time three-finger players that were influenced by classic banjo, for example Charlie Poole.

The tuning that is used in classic banjo is mainly socalled "drop C tuning" (gCGBD), that classic banjo players refers to as standard tuning, or low bass tuning.

Go to https://classic-banjo.ning.com/ to explore more about classic banjo.

When people say 'classic banjo' they can be referring to a 'golden-age' period of banjo (broadly from the late 19th century to 1930s) when the dominant style of banjo playing was 'guitar-style' or fingerstyle and the music was the popular music of the day - so it's not really a specific 'genre' of music as this covers such a wide-ranging period of music from popular songs ('Old Folks at Home') to ragtime. It can also be used to refer to the style of playing itself (fingerstyle played with thumb, index, middle (and sometimes all fingers) with bare fingers typically on banjos with gut strings or modern equivalents like nylon or nlyguts).
I think of 'oldtime banjo' as linking more to the country/hillbilly genre of music (recorded in the 1920s) and American fiddle tunes so it is more genre-specific...
It definitely is worth exploring 'classic-style' as there are so many cool tunes that were written specifically for the banjo.

While the music did follow popular form, there is a HUGE body of banjo specific repertoire, or compositions for the banjo that are "characteristic" of the instrument.

In addition to that, the books are filled with jigs, reels, hornpipes, and things that would be considered "fiddle tunes" today.

It is also important to set the record straight that this was largely a working class phenomena in the US (I can't say if that goes for England too).

I had this album way back when. It may be "old time", but I wouldn't classify it as "Old Time". It's a specific genre that would be more at home in, say, Music Hall than an Appalachian setting. I'm sure you could use the technique, but probably not the repertoire. 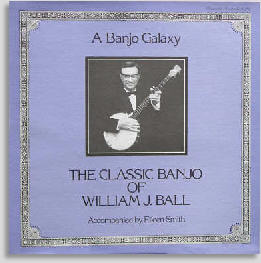 I had this album way back when. It may be "old time", but I wouldn't classify it as "Old Time". It's a specific genre that would be more at home in, say, Music Hall than an Appalachian setting. I'm sure you could use the technique, but probably not the repertoire.

With the exception of one piece, Marche Impromptu by Paul Eno, all the pieces Bill Ball recorded on this are English compositions from the 20th century,  While many (of the handful) of current players of "classic banjo" tend to focus on 20th century English composers, there were thousands of compositions for banjo published in America before 1900 (and more after).

Of those pieces, most are very approachable and playable for the banjoist with average skills. Many are quite simple to play.

20th century compositions by Emile Grimshaw, Joe Morley, Alfred Cammeyer, etc, do not represent the full body of work of American composers during the classic era of the late 19th century.

lassify music however you want, even if it's an incomplete and inaccurate name.

hate classification; too many things fall into cracks in the great homogenization scheme we are all to ready to embrace. "Classic" as an old-time style seems about like calling a motorcycle an automobile.

I would say - Not Old Time.

It would be its own specific style and genre.

That being said, like almost anything to do with the banjo, there is certainly some crossover. Case in point would be Charlie Poole and Uncle Dave who used many Classic banjo techniques, but in no way would be considered Classic banjo players.

All of the beautiful Pre WWII banjos, both English and American that we love so well were designed to play this style of music.

Seeing as most "classic banjo" tunes are older than the majority of the music that constitutes modern day "old time," I don't see why classic banjo shouldn't be considered old time. I personally wish that there was more cross-pollination between the old time and classic banjo scenes, but past attempts to facilitate this by luminaries such as Paul Cadwell failed. Since then, flawed academic research has only furthered the divide. The obsession most contemporary classic banjoists have with the English repertoire (and their subsequent neglect of the American repertoire) have also exacerbated the situation.

Well, there is "old time" in classic banjo so I guess it depends on your point of view. Here are some examples...

Good Old Tunes For The Banjo, "a collection of old time instrumental and vocal compositions including some of the modern favorites":

Also attached below from the Stewart Journal.

I'll mention again that there is a large body of work from the classic era that would be right at home for the modern "old time" world.

Turkey in the straw, Green Corn, etc., were common.

"Old Time" banjo as it is known today was pretty much born from nostalgia for the "good old days". What we call "classic banjo" does not fit well into that narrative, which is why it is often passed over and dismissed (or entirely ignored) in post folk revival history books.

At best the narrative is spun to sound like only the elite 1%ers participated, despite the fact that it was a working class popular culture movement. 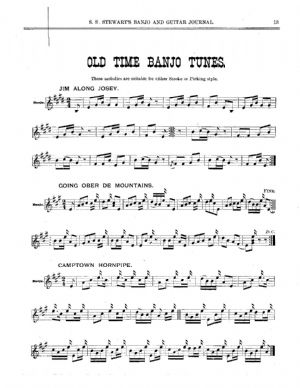 Is classic banjo considered an old-time style? Generally, no. But that's not to say there isn't a lot more of interest that goes unanswered in that reply. What research sets out to try and establish are the realities experienced by people in a given context. Classic banjo has roots further back than the 1930's, tracing back into the 19th century. Those people's experience doesn't correlate with ours. That's why using our modern 'definitions' with their artificially fixed boundaries is really an obstacle to understanding and expanding that history.

It's funny and I've said this before.
I play clawhammer style (or whatever you want to call it ... bum-ditty) but I don't care for or play much "Old Time" music.
Mostly country, folk, bluegrass and even some rock. I go to many bluegrass and Americana jams. The old time jams I've attended are boring to me. No flames please. I just don't care for most old time music.

I have to cruise all the forums as there is no specific classification for how I play. I pick up a lot of really cool stuff on the bluegrass forum and just try to modify what they do to my style. It's fun.

For the life of me, I just can't master 3 finger so I don't try anymore.

'Need To Replace a Computer' 55 min