Advice regarding a 2003 Blackjack

Been looking for a Blackjack for some time and finally found one for sale. Build year 2003, professionally refretted and speednecked recently, Yates 5/8 bridge, new Rickard Cyclone tuners plus a white Calton case. All I have is pictures and they look good enough. The seller wants $5200. Most of the famously fragile plating is still on the flange, armrest, and tailpiece.

I've played a friend's Blackjack (and unsuccessfully tried to convince him he doesn't need it). I'm fine with the fragile plating and the V-neck. The tone and playability on his is absolutely killer; I know this is a banjo model I want.

Two questions: 1) What questions should I ask the seller, and 2) Is 5200 a reasonable price for the full package?


BONUS Q: I've read a lot about the RB-75 JD Crowe reissue as well. Are there valid reasons to seek one of these instead of the Blackjack, and at what price?

BlackJacks come up very rarely. I know from personal experience, if a instrument is unusual, rare or fairly desirable, they move very quickly. You hesitate, and chances are someone will beat you to the punch.

As for the value, the instrument was speed necked, that in my mind takes some value off. I have no idea as to why people do this. Personally, when I see one of those on a banjo, it drives me nuts, but to each their own. It does come with a Carlton case, and that adds some value. So between the case and the speed neck, a wash. The Rickards, great tuners, but I donât know if they add value, since I would detract some value for not having the originals. 5200 to me seems a small bit high, but you state: â I know this is the banjo model I wantâ . That being said, I would offer a little less, but if the seller hesitates, just give them what they want. If you donât, you may wind up waiting a good long spell before another appears.

"As for the value, the instrument was speed necked, that in my mind takes some value off. I have no idea as to why people do this. Personally, when I see one of those on a banjo, it drives me nuts, but to each their own. "

Totally agree w/ you on this !

Interestingly , Gibson , in its effort to add a "vintage" look to the Blackjack , copper flashed the gold plating to a point where the process left a dark unplated look , especially on the flange of mine & others I've seen . I think a "vintage" mistake !

But , all things considered , I really like the banjo .

Good luck on your quest to find one --- I think a good investment in todays market & as well an enjoyable player w/ good set up .

The Calton case is a plus on the one in the classifieds however I am always apprehensive when a seller won't allow a return on a quality instrument .

The Blackjack is the only Gibson mahogany and gold catalog listed banjo. It's unique in that way.  And it has a unique inlay pattern that is elaborate.  That's why I bought mine.

The only "common" problem to check for is a crack in the bend of the Presto tailpiece. Many Blackjacks suffer from this. You can't get a replacement that includes the Style 6 "X" on the cover piece, or one with that DARK copper flashed gold plating. But you can buy a Prucha gold plated unengraved tailpiece with copper flash BENEATH the gold (where it belongs), and it will be darker than any other gold plated Presto on the market. And you can take the "X" engraved cover off the Blackjack's tailpiece and put it on the Prucha. (Prucha copper flashes all his gold plated parts before gold plating, giving a slightly darker hue).

I don't know what Gibson was thinking on the gold plate job. Either they put the copper flash on TOP of the gold (?????) or they used so little gold plate that the copper beneath shows through immediately, right in the store.

Stand back 6 feet though and that gold plate just looks old, dirty and worn. Which is OK I guess... It's ok with me anyway.

Blackjacks are Very powerful banjos if you set 'em up right. The first one I saw on stage at an outdoor bluegrass festival was in the hands of that blonde feller that used to play banjo for Larry Sparks some decades ago. It impressed me. Senior moment -- I can't remember his name.

I don't think they were made in numbers anywhere near the reissue Granada. Perhaps a bit more numerous than the reissue Style 5s and 6s?

Check out the one you're interested in it. Let your desire for it influence what you want to pay for it. They're not common in the market.  Wait, I just checked your location.  SWEDEN???   When are you ever going to see another one in SWEDEN?  If you like it, BUY IT!

The no-return thing would be uneasy-making for me at this price . . . all the more so at the OP's distance for shipping and transacting. I don't like it. And I do consider a speed neck a value-lowering disfigurement.

FYI re "RB-75 JD Crowe reissue"---The Blackjack WAS a "Crowe model." There was the "Gibson RB-75 JD Crowe" with Flying Eagle inlay and nickel plating. That was a fantastic banjo and one I'd prefer to the Blackjack--not because its tone or power was better, just don't like the issues with the copper flashing on the BJ.

A year or two later they issued the "Gibson JD Crowe Blackjack" with the copper and a unique inlay supposedly fished out of the Gibson trash bin by Greg Rich. Both models were specc'd with a special tone ring supposedly dedicated for those models (though it ended up in other models on occasion willy-nilly). That was the "Crowe tone ring," I believe fashioned by the Sullivan works. Despite my antipathy toward the copper-flashing on its hardware, the BJ has fans who swear it has a unique "old, warm, and dry" sound that hearkens to the Prewar era like no other mahogany Gibson reissue.

Speaking of the Crowe BJ and its specs, the OP may wish to confirm the original rim and Crowe ring. Though personally, I think purchasing from an established dealer with a return policy would be preferable at the OP's distance.

Both models were specc'd with a special tone ring supposedly dedicated for those models (though it ended up in other models on occasion willy-nilly). That was the "Crowe tone ring," I believe fashioned by the Sullivan works.

Yes. It was the exact same SUL-1 20-hole pre-war style flat head tone ring that Sullivan/First Quality had been making and selling to the public for decades and putting in its own Sullivan banjos. The only difference was the "Gibson" script stamp and a 4-digit serial number.

Eric Sullivan confirmed this in a post here on the Hangout maybe 10 years ago when he announced a price drop from $229.95 to $199.95. It stayed at that lower price for quite a few years until recently. Now it's $249.95 in nickel.  People ask $400 and more for the Gibson-stamped version.

Eric also revealed in that same post that this ring ended up in some RB-250s and other Gibson models when there were supply issues with their usual ring. I have no knowledge whether those Sullivan-provided rings had the same Gibson script or whether they said "Gibson USA." And I don't know the history of Gibson USA.

Peter: I believe you should ask the seller if he can confirm the originality of the rest of the banjo. Unfortunately, the "Gibson" stamp and serial number are on the underside of the inside foot, so not visible when the tone ring is installed. Based on what Ceemonster says, if the gold plating matches the rest of the banjo, then it's probably safe to assume the ring is original.

I have no idea on value. But I believe I'd get the neck refinished/restored to original quality and eliminate the speed neck. So I'd offer a price low enough so that further investment would not put me in a position of having too much in the instrument.

Knowing what the flange looks like on mine compared to the sellers banjo , I'd ask the seller to provide close ups of his flange ---- if I were the buyer . 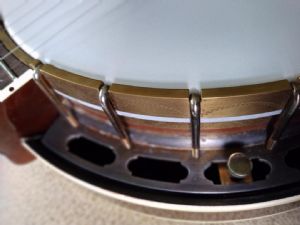 One of my plating vendors used to do gold plating for us on electronic terminals, gold over copper. He stopped because his guys were dropping pennies into the gold tanks , and hence getting gold plated, while the terminals would either have too little gold thickness or he was spending a lot more on the parts to get adequate thickness. Wondering if Gibson's plater has the same issue?

As far as originality of the tone ring, I think the engraving on the outer skirt shows it to be typical of Gibson engraving of that period. If it's the original rim it had better have the serial number stamped in the usual place inside!

'Somewhere Over the RainbowâBanjo Lesson' 1 hr