Anyone on BHO ever play banjo at a Shakey's Pizza in the 60s or 70s?

Seeing the two guys play Vaudeville and 20s and 30s pop tunes at the local Shakey's Pizza was probably my first encounter with live banjo. I was wondering if any BHO members played gigs at a Shakey's back in the 60s and 70s? Kind of amazing that happened considering how restaurant business managers today wouldn't allow for such inefficiencies in their outcome algorithms as to hire a banjo player for their franchise operations--maybe a robot banjoist driven by AI. But I know the whole Americana thing was big at the time, especially with the Bicentennial. And that era of music was somewhat popular with films like Paper Moon, The Sting, Bonnie and Clyde, etcetera...anywhooo, just curious. Not endorsing that chain, if it even still exists...here's and old tv spot from 1970: m.youtube.com/watch?v=3TrpjKelALc 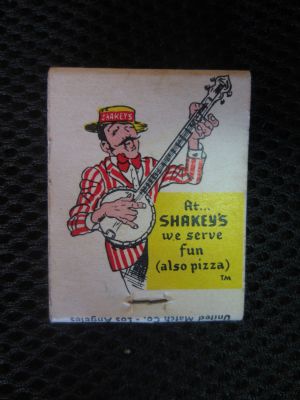 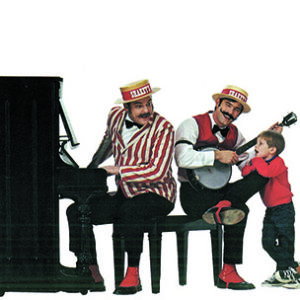 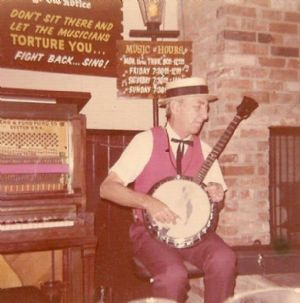 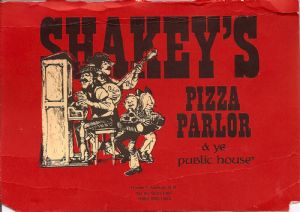 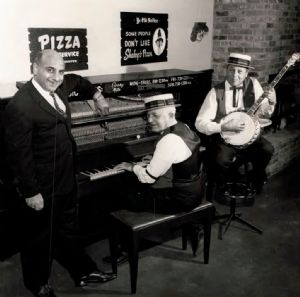 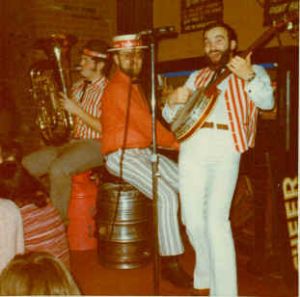 In the summer of 1970, I played banjo with two other guys in a pizza parlor called the Village Inn. By the end of the first week, the crowds steadily increased until the place was jammed. It was fun and the owner couldn't have been happier. Attached is the history of the Red Garter and Your Father's Mustache banjo clubs.

In the late 70's my band was playing a Shakey's in Red Bluff, CA. I remember I was fairly new to playing banjo in public and after one solo I got a big round of applause from a table of 5 or 6 folks. Thinking I had really arrived, I realized that they had been playing a duck shoot game that was on the wall above the band. The applause was for a good shot, not a good break. That and playing while a loud speaker called, "Number 12, your pizza is ready." Dues were paid.

I grew up in Milwaukee and we had a Shakeyâs on Hwy 100 & Silverspring Rd. They didnât always have the banjo player but when they did, thatâs when my mother told me she would buy me a banjo if I would learn to play . 40 years later I made her hold up her end of the bargain!!!
I can still smell and taste Shakeyâs pizzaâ¦â¦.it was the best and as kids we got o look through the huge window and watched em make them. I believe there are only a few open anymore and they are in California. I also understand they NEVER changed their recipe.
I would kill for a slice of that pie right now!!!
Slammer!!!

I never played at Shakey's but I ate at one. Those banjos were loud!

Alison Brown has related in many interviews that she got her start playing with other people at a Shakeys in southern California.  Back in the day I ate at Shakeys here in AK once or twice a week,  Yes, they were really good.

On Saturday nights I would frequent Uncles Pizza on the banks of the Chena River in downtown Fairbanks Alaska to watch Carl Hoffmans bluegrass band.

Another place we went to was called pipes and pizza, had this magnificent pipe organ on an old stage and the pipes went clear up to the roof that was a good time too

Here are a couple of jpegs for those walking down memory lane. 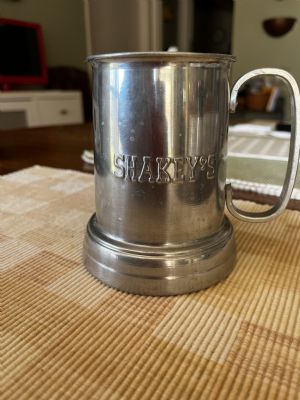 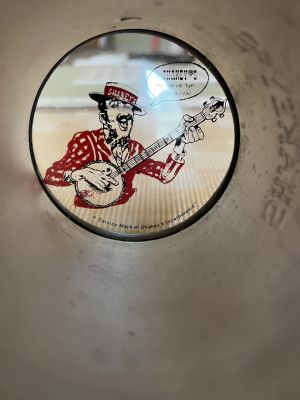 Shakey's Pizza was one of those bizarre bits of popular culture based on nostalgia for something that never happened before it. Something I am obsessed with.

This was a BIG fad, and if you did not have a Shakey's in your town, you likely had a knockoff of that or Your Father's Mustache bar.

The concept is corny has heck. I was born too late for it but it sounds like a good time to me and I am sad I missed it.

The only problem with popular fads that use nostalgia is that they tend to cloud or rewrite history. I think there is a lesson to be learned about that which could be applied to "old time" banjo.

I auditioned, but didn't get the gig.

I went as a kid, and liked the pizza. Did not like the striped vests or hats or the banjos!

I played at a Shakey's in La Crescenta, Ca. back in 1971, but that was due to knowing the piano player more than any talent I had. I learned fast, because I had to, and that was a really good thing. At the time, many Shakey's were going under, including mine. The fad was dying.

I never w3as much of a pizza person, so I have no idea of their pizza quality, although I do know that their soft drinks were lousy.

I was out in several months, the piano player was canned a couple months later, and for a short time, they had a "bluegrass group (not a good one) that lasted a very short time. I think they went to screening some silent movies before finally kicking the proverbial bucket (or in this case, kicking the banjo head.

Although I realized how phony=baloney it all was, I am sad that the fad ultimately failed. I learned tons there, including some handling of hecklers. I also know a great jazz piano player who got into music after a trip to a Shakey's as a kid. We don't have those opportunities these days.

There are so few musical venues anymore. Where I live now, an entire band generally gets paid about the same money as I alone made five decades ago, and I was little better than a beginner.

The Shakeys I remember had piano players, but donât remember any banjos.

Had a buddy that played piano at one several nights a week. Customers would buy him beers all night long and by the end of the evening heâd need a ride home!

If you had posted this thread over on the Four String Section, you probably would have gotten a few more "been there----done that" responses. The Shakey's Pizza fad was basically a four string banjo (Gay Nineties/Roaring Twenties/Sing-A-Long) phenomena.

The whole concept seems strange, bizarre and weird. Right up my alley.

If there had been Shakeys Pizza in NYC back in the 70âs, who knows, I might be playing tenor banjo now.

Seems like a trip I am sorry to have missed.

I played in the Minutemen, we were the first in Kansas City, Missouri.

The Sophomores who came after us were way better than we were.

Then came the "war" and off we went. I'm an era veteran, all in Germany, Charter member of the American Folk Music Association forming in Frankfurt, I got German Press.

When I got back to Kansas City, the Vanguard Coffeehouse was now offering some dick with an arrow through his head on banjo. Yeah.

And Shaky's was across the street where the beer and crusty were resident, different crowd for sure.

And who was on stage with the 5th string tuner removed but my schoolmate, now all grown up.

He joked about having earned $1000 at Shaky's. He was now a "thousandaire."

The last time I played at a Pizza place after winning a local talent contest at "TurkeyRama" in McMinnville, Oregon, I ended up on KMCM 1380 AM in a real radio shack out by the Yamhill County Fairgrounds at around 1am.

Keep your wings, you will need to survive the "Seraphim shuffle" where they just push you around to the best opportunity for all.
Stay tuned.

I had a pickup full of banjo timber from Kentucky when I stopped in Kansas City and played in Loose Park. Suddenly my hardshell case was a Conga and the school cooler was, too. I had like 40 kids from a summer school "at risk." Meaning the banjo and a little acoustic music went a long way to bridging the gap between "real trees" and real 3" Cherry lumber in the back of my truck. They could smell it and touch it, like they were blind kids, just the ghetto.
I was "supposed to" help these kids, heck I got swept along, I don't mind at all.

Disco put Bluegrass on the back burner someone forgot to light. 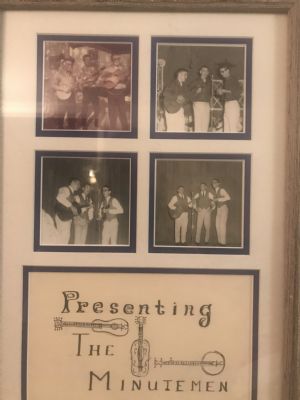 A friend of my family,Mike Long, played for Shakey's Pizza.He's an excellent banjo and piano player.
My Mom wanted that "Honky Tonk" sound and Mike installed thumbtacks on the felts of our Story and Clark upright back in the 60s.

Mike could play Scruggs breaks note for note on the piano and offered me his RB 250 for $200 in '69.
I couldn't afford it and bought an Aria,instead.

'Need help with this banjo' 1 hr