As the pandemic was underway, I got into playing three modal songs with very different feelings and meanings. I was sort of amazed that they all easily played in modal tuning, aEAde, and I really enjoyed playing them. They are: “Me and My Uncle” by John Phillips, “Now is the Cool of the Day” by Jean Ritchie and “Alone and Forsaken” by Hank Williams, Sr. They were all uploaded to BHO, two in March, 2020 and one in 2012. A recent TOTW presentation of a song with banjo, along with the interesting story of its writing, has inspired me to choose “Me and My Uncle” for this presentation.

Back in the fall of 1964, I left the east coast and moved to Denver, Colorado to work on a PhD in Biochemistry. I quickly found the Denver Folklore Center and its owner Harry Tuft. Harry sang this song quite a lot and I did learn a bit of it on guitar (my banjo playing was not to start for another 9 or 10 years). While the lyrics are just about the “meanest” that I've ever heard in a song, it was rather popular.

“The origin story of this song is well documented. John Phillips, of The Mamas and the Papas, wrote it in a tequila-soaked haze after a Judy Collins concert, in roughly 1964, best as I can ascertain, in a hotel room with Stephen Stills, Neil Young, and some others. He woke up with no memory of writing the song, but fortunately, someone had run a cassette tape, and Judy Collins kept it, later recording the song. The liner notes to Phillips’s Phillips 66 album say that “John used to joke that, little by little, with each royalty check, the memory of writing the song would come back to him.”

“If Phillips wrote the song out of his head, without a map to hand, he must have had a good sense of geography. If you look at the route from, say, Pueblo, Colorado, to El Paso, Texas, you will see that Santa Fe is indeed about halfway between the two points. Amazing.”

“What was the time period? Well, there are some clues, but not anything that would narrow it down much. There are cowboys. They’re drinking in a bar. People are riding horses. They are betting gold. So, somewhere between 1870 and 1912, at which point Santa Fe became part of New Mexico (up until then it was located in Texas, officially)…. I would love to hear additional speculation.

The card game referred to as “High Low Jacks” in the song seems to be a game known more commonly as “Pitch.” It also goes by the name “Setback.” It can be played as a partners game, or as a singles game—known as Cutthroat Pitch. If you want to know more, you can look it up!

It’s a long ride from Santa Fe to the Mexican border—337 miles or so to Juarez, just across the river from El Paso. That could have been a ten-day ride, if the horses average 35 miles a day, which seems to be within reason.”

In addition, to the vocal version I originally uploaded, I've also done a solo banjo version for those who might be interested in figuring out how to play it (I've written no tab for this). I start out by playing it slowly and increase speed to singing tempo. You should be able to hear where I do slides and pull offs. You might also be able to figure out the few times that I drop thumb to get a melody note; not very much drop thumb in playing this tune. There's a fair amount of double noting (i.e. where I'm fingering a lower pitched string, often sliding into it, to duplicate the note on the higher open string). As for the chords, it's as I hear it based on the melody. I've included the chord changes and the lyrics, though in many performances you'll find slight differences from one performer to another, and sometimes myself from one take to another. Coming to banjo from guitar, I'm very harmonically oriented and always want to hear the chord when I do the “cluck”. 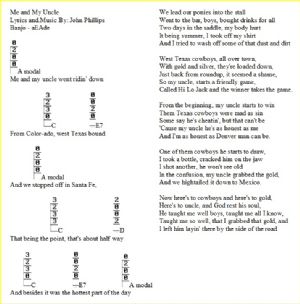 Me and My Uncle by John Phillips

Me and My Uncle - banjo solo

Me and My Uncle

Nice, Carl! Like many, I know this song via the Grateful Dead.

The John Ford movie "Wagon Master" features a scene with cowboys playing poker, and one of them calls the game "High Low Jick Jack Jenny and the Bean Gun".  Apparently, Ford used actually cowboys for that scene and that dialogue was improvised.

Arranging a modern-day cowboy ballad banjo solo is a rare accomplishment, but you did it Carl.  After working on it myself and then listening to your solo, I was impressed with the feeling you portrayed and the banjo's embellishments.

I chose to listen to Joni MItchell and then to your vocals to come up with something.  Your chord chart helped, especially when I got stuck on what you call the D chord. After finishing what was a challenging tune for me this week, it was actually satisfying to play.  The chordal flow is unique.  The lyrics I can do without!  Cowboys and guns and gambling -- a part of history in California, too, which you can still sense here.

Me and My Uncle (CH) tab

Me and My Uncle (TOTW)