What's a simple way to mic my banjo for live performance as a singer?

I am going to start doing my first (!!!!) live shows as a singer-songwriter, with the banjo.

I have a live mic for vocals, but how do I mic the banjo?

I have a clawhammer and a resonator, but I'll probably perform with the clawhammer.

I'd love to get myself a simple, inexpensive mic for the banjo, so I can practice the setup at home and have a backup to take with me to the performance, just in case the venue doesn't have whatever I need to mic a banjo.

You can't go too far wrong with a Shure SM-57. $100, does not require phantom power or batteries. And they will work in situations where condenser microphones will not.

Innumerable variables influence the choice. How do you approach and use your vocal mic? How much volume boost do you need (playing solo? accompanists? they playing acoustic guitars or electric? horns, drums, organ?). Size and acoustics of venue? What sort of sound system there? Who's running the sound? What sort of tone and volume does your playing get out of your banjo? etc etc.

If you want a stand-mounted mic (as opposed to one which mounts on the instrument), just about every house system will have a Shure SM57 on hand, and you can't go too far wrong with one of those on a banjo, especially if the banjo's mostly behind the voice and not trying to blast a solo out over a band. Anyone who does live sound is used to working with that mic. I'd say start with one of those (you shouldn't have to bring your own!) and see how it works for you. It will give you a known base from which to say what you'd like better, and someone who knows microphones will have at least some idea of what to suggest to give you those characteristics.

You can't go too far wrong with a Shure SM-57. $100, does not require phantom power or batteries. And they will work in situations where condenser microphones will not.

posted while I was typing. Great minds, i guess...

and come to think of it, if you can still get one for $100, you might as well buy one. They're nearly indestructible.

Easiest, cheapest way I know. Been doing it this way for years. 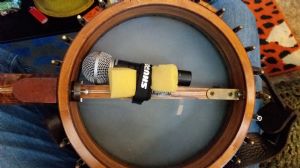 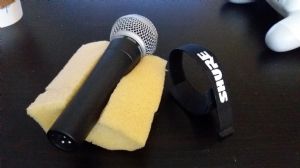 SM57 is great mic, will sound good, and built like tank for being on road. There are less expensive ones that sonically would probably work as well; though perhaps be bit less rugged (if that's concern?).

As solo, as Dan mentioned... might want to consider:

First, what kind of gigs? How much do need to crank the volume; potentially gain before feedback issues? How loud can go, GBF, is not always the most important factor; esp as solo small venue (and not needing monitor). If not a concern, then might consider some other options about quality of sound. Tone, but also how much directness, presence, want from both banjo and vocal.  What are you using for vocal mic and mic technique?

Many solo acts prefer a little more mic backed off distance and natural full sound/airiness; rather than up on the mic,in your face, sound.

Along with that, many soloist prefer sound and look of a single mic  technique - one shared mic for both vocal and instrument. (less stuff to mess with) - You control balance by finding (via practice) the right height/distance between, and can change volume of either on fly by moving closer in/out to mic. Ear Trumpet Labs has some info/videos examples (don't have to use ETL mic, though they are great). I've seen folks use condenser mics like AT2020 ($80?), worked well. (requires phantom, but shouldn't be problem).

I am user of Cling-ON. This allows me to be wire free. I use a Blackwing Wireless Guitar setup to connect to any mixer via a DI box. Very authentic sounding.

Hi Sarah, glad to hear you're getting along.

The Gold Tone clip on is the simplest.

But laying a mike inside a banjo is what we did in Germany on tour. It works really well. 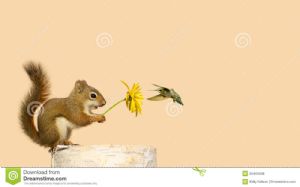 On stage fold-back monitors are why banjo pickups needed to be invented. if you need a pickup due to stage volume, no microphone will bail you out.

I used the SM57 for all the reasons above. A few sound guys balked at micing a banjo so I added a pickup I use now.

Enjoy the gig and have fun, it's a rush!

I use Dpa 4099 clip, it is expencive but great quality both for live playing and recording...
the attached video has been recorded with the dpa plugged in a zoom recorder you can see the mic on the banjo head... 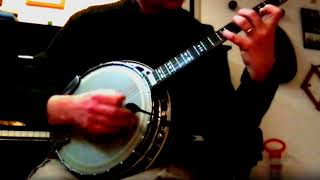