Recently finished building my first banjo, a Proffitt-style mountain banjo, based on the directions from JD Graham (jdgraham.net) and Vol 3 of the Foxfire books. The neck and body are maple with a smidgeon of figure, and the contrast details (heel cap, pegs, and plugs) are beech. Also made the strap from scratch.

Ended up with a playable instrument and I'm pretty happy with it, tho I definitely learned some things I want to change on future builds.

The biggest thing is that with the flat neck I had to trade off more than I wanted to in bridge height to get the strings to a low enough height to be playable. With a normal height (1/2-5/8") bridge, the sound was great -- much richer and full-bodied than I expected given how small it is. However, the strings were *way* too high to play, and when I got the bridge short enough to be playable I had lost most of the richness of tone.

I'm starting to work on the next one, and planning to put somewhere between 2-3 degrees of angle in the neck, inlay, plus more modern tuners instead of the handmade pegs just to make it easier on myself. I'm also going to make at least one fretless as I haven't had a chance to play a fretless banjo yet and want to try, and worst-case scenario I go back and install frets later. 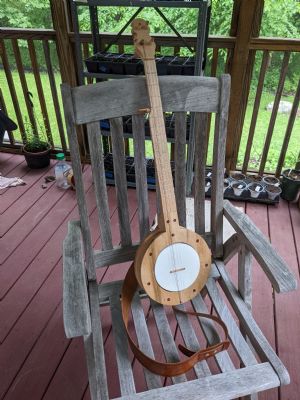 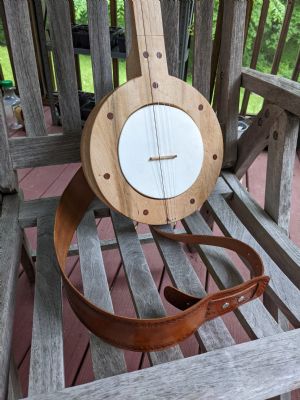 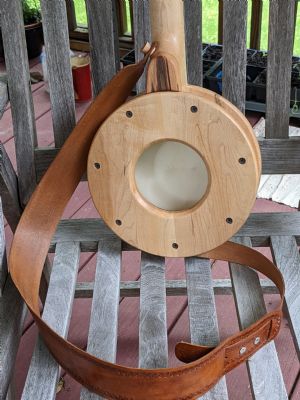 Nice! Could it be possible to reset the neck to that three degree neck angle?

About 45 years ago I found a wooden foundry mold and thought, "That might make a good banjo pot." I carved a neck from an oak table leaf, bought a piece of hardwood for a fingerboard and used a skin from an old snare drum. I modeled it loosely after Frank Proffitt's banjo and left it fretless. I had a lot of fun with it for a while, but it eventually became a wall hanger. My friend Jimmy Bowskill had given me a few instruments and one day he took it off the wall and played a few tunes. I told him that he should keep it and the last time I was at his studio, he had it strung with Nylgut strings. 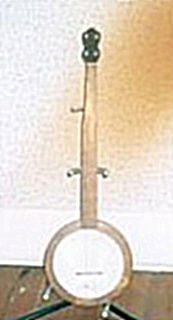 Nice job, Toma. One of the most rewarding things about building is the feeling of accomplishment that comes from playing an instrument you made with your own hands. You learn from your mistakes and see what you need to improve on your next one.
Banjo Building Syndrome is as addictive as Banjo Acquisition Syndrome, and I see you may be learning that already. Congratulations on your new banjo.

Nice job. I found when building CBG's 3Â° gave really good clearance. You will love the Fretless sound, but it takes a little adaptation of playing technique for best results.
Cheers from Bill.

Dave, I could rework the neck to add in the angle, but I think I'll learn more by making more and learning from each of them rather than tweaking a single one. I might revisit this one later, or I might just be happy with the fact that my first one is playable at all!

Mark, agree on all counts

What height were the strings at around the 12th fret with the 1/2" bridge? I think the norm for these with no angle and a 1/2" bridge will be about 3/16"-1/4" from fingerboard to the underside of the strings at fret 12.

While I've played with angled necks on these, I think 1-degree is sufficient with a 5/8" bridge while maintaining the above mentioned string height. While I've done some with 2-degrees or a hair more, I usually ended up having to use a 3/4" bridge or one slightly taller (if my cuts turned out a bit rich) to allow string clearance, as I like a taller action in conjunction with nylon strings. Plus, if the bridge is too low, you may run into problems with the strings not wanting to stay put in the bridge slots.

For reference, this is where I incorporate the angle, guessing this is how others have done so as well: 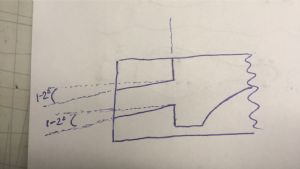 Thanks Noah! I put a 1/2" bridge back on to get precise measurements, since I can't find the notes from when I was shaping it. With a 1/2" bridge I've got just a hair's breadth less than 3/8" at the 12th fret. The bridge as I ended up cutting it was 1/4" tall (and definitely has the problem you mentioned with strings not staying put, tho not so severe that I can't play) and the string is 13/64" at the 12th fret.

13/64 is just barely shorter than 1/4, but I think the other problem here is that the drum is slightly elevated above the face. I didn't think this would be a big deal, but it affects the mechanics more than I expected (one of the useful things I've learned from this one). The net effect is that the higher end of the neck has a greater relief, so the neck is effectively set really low. I could take the can out and shorten it so that it would be flush, but I'm slightly worried about completely removing tension off the head and then putting it back. I guess I would be putting significantly less tension on it with a shortened can, though. Would I need to re-wet the head before I put the can back in?

Thanks for the diagram as well -- it's similar to what I had come up with, but slightly different so I'm studying it to see if I could make the cuts a little simpler than my current plan.

If you shorten the head ring, you would have to remove the head, soak, and reinstall it (or a new head) in order for the tension to be restored. Otherwise, it would be too slack. I don't think it would stretch enough even if you wetted the head after reinstalling the shortened ring. But shortening the ring to be just flush or a hair under the top will help the bridge height issue.

One thing I did on one or two builds with a similar string attachment, un-angled neck, and 1/2" bridge was to add a string clamp at about the edge of the head to create a steeper break angle to the bridge. While the strings usually stayed without the clamp, once in a while I would pop the fifth out if digging in. Lately, I've been using a string tie-bar (as some have used) centered in the top ring at the tailpiece end, which shortens and steepens the strings while giving a solid attachment point. While I like the simplicity of the method of drilling holes in the edge of the ring to tie the strings to (most of my builds having this feature), sometimes I've had to watch when the grain was running vertical in the top ring as the strings wanted to pull more into the wood being tied on. A stopper knot would probably do better for that scenario.

Ok, great, thanks. That all makes a lot of sense -- I like the string clamp idea. I may experiment with all the things suggested at some point with this banjo, but for the moment I think I'm going to focus on applying what I've learned to the next one.

Rather than installing the neck at an angle, I made the neck sit 5mm higher than the top hoop. Same effect as a 2 degree neck angle, but heaps easier to construct, as all the cuts are at right angles. Also has the added benefit of providing a frailing scoop. 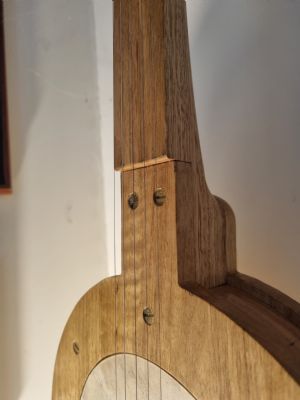 Ah, great call. I suppose I could remove the frets and add a fingerboard on top of the existing neck to accomplish the same (and a new nut at the right height). Thanks roo!