Fellow Stanley Style picker Pick1949 has put out some great videos of Ralph Stanley tunes. I havent posted a video in ages but he has inspired me to throw one out. Its a lesser know tune Ralph did of Snow Deer. Didnt realize just how rusty i was on this till i tried recording it. Musta took a couple dozen tries till i got it half decent.

Heres a link to the actual recording

Theres also a video of Butch Robins playing Snow Deer on youtube. You should check it out to see how Butchs more melodic rendition differes from Ralphs style 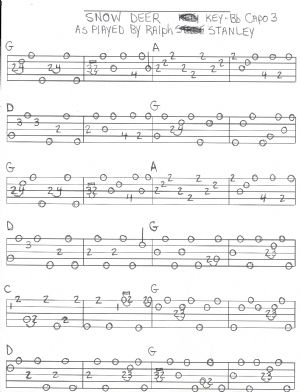 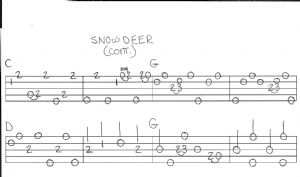 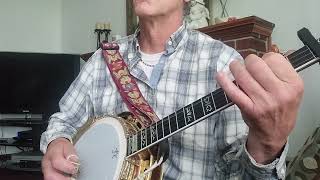 Thanks for sharing! Definitely one of the lesser-known Stanley gems.
That bar A chord is fun.

I only know of one other guy that recorded it Ralph style and I believe that was a fellow named Chris Smith? On a Larry Efaw/Bluegrass Mountaineers album.

Nice tab too Garyâ¦ btw Iâve already had multiple messages about tabs for some of the tunes Iâve put upâ¦ and Iâve directed them to your homepage here. Itâs actually pretty neat that a lot of people are wanting to learn this style of banjo I thinkâ¦ I know Iâve always loved it and think it should not be forgotten. Itâs one reason Iâve been putting a lot of Ralph up on here. And I like how you played through it slow the second time around. Iâve also told a lot of people about the slow down function on YouTube videos multiple times when they have asked about tabsâ¦ getting a little more material out there like a tab or a video might help somebody who wants to learn the style! Thanks man!

Gary's tabs have kept me busy for literal years! I simply cannot thank him enough. (thanks, Gary!)

If either of you want to try this one...
Are you waiting just for me?
From the classic 1950's Rich-R-Tone recordings.

I tried hammering it out this weekend, these old muddy recordings can play tricks on your ears when slowed down.

Gee, I hadn't thought of that song in years. I remember jammin' to it at festivals years ago.

Enjoyed your pickin'. Thanks for posting.

That’s a good one Chuno… I’ve always loved Ralph’s break on the original version of Hey, Hey, Hey… love that high variation Ralph played. I’m definitely gonna put up more Ralph stuff… here and there when I get chances. I thought about breaking down certain back up licks and what not in video format... like I did with Clinch Mountain Backstep... the thought has crossed my mind... like a Stanley style version of a lick of the week almost... but maybe not every week (haha). And I hope Gary posts more often too…

This tune shows up regularly at "fiddle jams" around here. Don Reno recorded a version of it titled, Nova Scotia Sleigh Ride, apparently after hearing Don Messer do it on a Canadian East coast tour.

That’s a good one Chuno… I’ve always loved Ralph’s break on the original version of Hey, Hey, Hey… love that high variation Ralph played. I’m definitely gonna put up more Ralph stuff… here and there when I get chances. I thought about breaking down certain back up licks and what not in video format... like I did with Clinch Mountain Backstep... the thought has crossed my mind... like a Stanley style version of a lick of the week almost... but maybe not every week (haha). And I hope Gary posts more often too…

I want to put up some Stanley Style vids too but can only record once in a while either when I'm out in the country or when my neighbors are away, or else I get noise complaints.. lol

Pick i hadnt even noticed it was reversed! I didnt know i played right handed lol

That was a great job of picking, Gary, and it's great too see those Stanley tabs still coming! This tune is usually played on the fiddle in the key of G; I wonder how Ralph and Carter ended up in Bb. The tune is an old tin pan alley song from 1913, written to cash in on the popularity of Red Wing and other faux Indian love songs, and the original song was written in Bb.  You don't suppose they learned it from the sheet music?

Haha, I hear you Garyâ¦ it still might be better for a right hand guy to see it flipped anyway maybe? Lol.

You bring up an interesting question that I have always wondered Don! Just where did Ralph get thisâ¦? I love Ralphâs banjo hootenanny album and always haveâ¦ I do know that they are somewhat sharp on some of the recordings on the record, if my memory is right. Interesting to try to figure where Ralph got his notion from on some of those tunesâ¦Like âRang Tangâ, âBig Boogerâ and âShamrockâ, but Iâve always wondered how Ralph came up with âLonesome Travelerâ probably the mostâ¦ and where he picked up his âSnow Deerâ from exactly.

Chuno, I look foward to a future video from you! You seem very knowledgeable in this area of banjo picking as wellâ¦ us Stanley style guys gotta try to keep it out there! Lol.

You bring up an interesting question that I have always wondered Don! Just where did Ralph get this…? I love Ralph’s banjo hootenanny album and always have… I do know that they are somewhat sharp on some of the recordings on the record, if my memory is right. Interesting to try to figure where Ralph got his notion from on some of those tunes…Like “Rang Tang”, “Big Booger” and “Shamrock”, but I’ve always wondered how Ralph came up with “Lonesome Traveler” probably the most… and where he picked up his “Snow Deer” from exactly.

Well, Snow Deer was played a lot as a fiddle tune by country fiddlers when the brothers made this recording at King Studios in Cincinnati in September, 1963.  It was about six or eight years later when I learned the tune from a fiddler from eastern Kentucky whose name was Harold Todd, who would come up to Cincinnati during the week to work at one of the auto plants in Norwood, and then drive back home on the weekends to be with his family.  Harold played it in the key of G, which I believe is the most common key, though once in awhile you would hear it in D.  Now, there are only three people on the Stanley's King recording, Ralph, Carter, and George Shuffler, who is playing both lead guitar and based, the later was dubbed over.  I wondered if maybe George played it in A, and they were pitched a semi-tone high, not an unusual occurrance among bluegrass musicians in those days.  So I went back to YouTube and checked out some old Stanley Brothers videos, to see if they were in the habit of doing that.  While they were often not right on concert pitch, I could not find one where they were pitched anything close to an entire semitone high.  I did run into one video that really perplexed me, a Stanley Brothers television performance of In the Pines.  I believe it is from a July, 1963 appearance on WDBJ-TV in Roanoke, Virginia, just a few months before they came up to Cincinnati for the King session.  They are singing it as a duet in the key of E, and just like Snow Deer, they are pitched a hair above concert.  If you look at their hands in the video (see below), Carter is playing in open position, with a straight E chord.  Ralph is playing in open G, capoed, using a closed D chord.  I expected him to be capoed on the 2nd fret, so that his D chord positions would be pitched in E, but if you look closely, he is capoed on the 3rd fret!  At first I though that his banjo must be tuned virtually a whole semi-tone below concert pitch.  But if you look closely, it appears his D chord fingering is still where it would be in order to be pitched in E.  His index finger appears to be fretting at the 1st fret, not the 2nd.  Now, why would he do that? 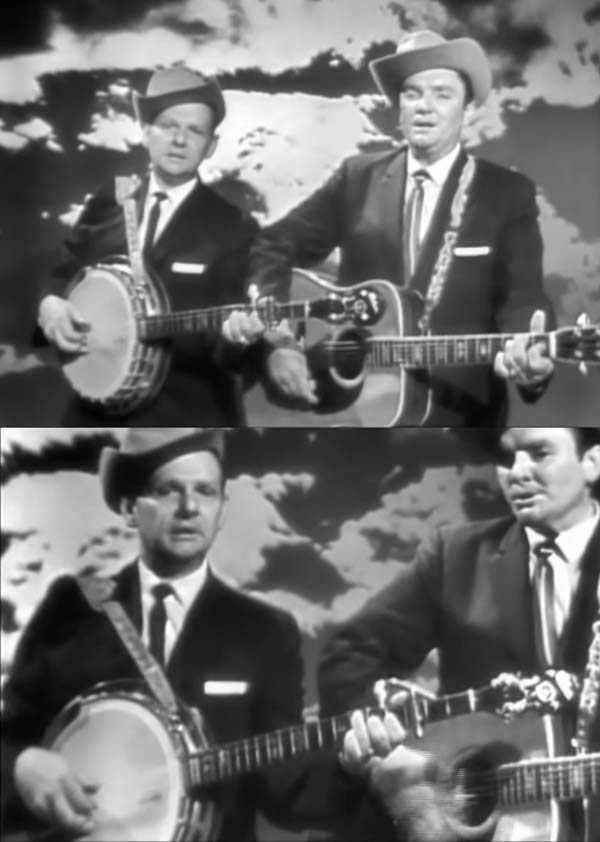 Iâve watched that video many times before but only glanced at Ralphâs banjo and never noticed what you just mentioned! Reckon I was always listening to the harmony more than focused on that. That is pretty dang perplexing! I really wish so bad that we had more footage of the Stanley Brothers available for us to pick throughâ¦ it is pretty unorthodox for him to be set up for the key of E that way ainât it?

I do know that Iâve seen several, several pictures of Ralph with two capos on his banjo where he undoubtedly left the key of A and put a c capo on too for the current song he mustâve been playing at the time of the picture snap. And Iâm wondering if maybe they where playing another song off cameraâ¦ jamming with Don and Red, or whatever and they where in another key more suited to the capoed 3rd fret? And Ralph just didnât bother fooling with the capo placement for tuning reason maybe.

Itâs been a while but Iâve seen that episode of the show with Don and Red and I canât remember what song they played before the Stanleyâs were featuredâ¦ maybe Ralph capoed up and tuned to them off camera and they were in B flat? Interesting observation either way and a good catch there Don!

Don, also what you mentioned about them being pitched high. I know that alot their classic recordings such as "Think of What You've Done" (C sharp/D flat) or even "Rank Stangers" (I believe might be in F sharp/G flat if I remember right?) are in weird keys. I've been told this must've been done in the recording process by engineers fiddling around with it and speeding it up or what not. But I've also heard that Carter would kid Ralph about always switching keys on songs... even heard him on a live recording (can't remember the source) announce from the stage that he couldn't keep up with where they were tuned/what key they done songs in because Ralph would change them to where he thought they did it the best at different times... ???? It's a question/thought to ponder ????

They did “Over in the Gloryland”….. I’m betting that’s what was going on. They either did this before or after “In the Pines” and Ralph’s capo was either already on for it or he left it on after this number in the show I’m betting!

They did “Over in the Gloryland”….. I’m betting that’s what was going on. They either did this before or after “In the Pines” and Ralph’s capo was either already on for it or he left it on after this number in the show I’m betting!

Well, Ralph is playing closed chords the whole time, so I guess it wouldn't matter where his capo was.  The days of live, on-air performances, you didn't even have time to take the capo off!  Thanks for the insight!  And thanks again to Gary for a great tab and video.

Ive always been intrigued by how the stanley brothers seemed often to be in some "in between" key, for lack of a better word