I have chosen W.A. Hinton’s old version of Leather Breeches to this week’s TOTW (https://www.youtube.com/watch?v=b8quLj2NPSQ ).

I first heard Leather Breeches on an LP in the 1970’s Early Rural String Band RCA Victor – LPV-552, which contained a lot of other good music.

Leather Breeches by W.A. Hinton was recorded on 31 January 1931, in Texas Hotel, San Antonio, Texas. It seems to have been the same date and same place as Jimmie Rogers recorded T.B. Blues, Travellin' Blues and Jimmie the Kid (source). The producer was Ralph Peer a well-known talent scout, recording engineer, record producer and music publisher in the 1920’s and 1930’s and discovered Carter Family, Jimmie Rogers and a lot of other early Old-Time or Country Music performers..

Hinton seemed to have recorded four tunes that day, besides Leather Breeches it was Little Brown Jug, Downfall of Paris, and Shortenin' Bread (source). All four tunes were labelled as “banjo instrumental”. Only Leather Breeches seems to have been issued and the other three tunes were and remained unissued (source).  It would have been interesting to listen to his versions of these tunes!

Very little is known about this W.A. Hinton. I have found no biographical data at all (more than there was an Afro American M.D. named William Augustus Hinton who lived 1883 – 1959 and was known to have developed a syphilis test).

The tune is a little weird. It has not the common melody structure with, for example, a typical A part and a typical B part (and perhaps C part). Instead, the tune is built up by a number of short phrases. There are a several crooked measures, and the repetition of parts or phrases are sometimes a little arbitrary. Just to get some structure in the tune I have identified the following essential parts (see also my tab below):

The original recording seems is in the key of Bb, and it seems to be in G tuning. I guess he tuned it up to about A (aEAC#E), and then there were recording issues that raised the pitch to Bb. I don’t think he used capo because capos were not common around 1930. I also doubt that he tuned up to Bb (BbFBbDF) because I doubt the strings were of enough good quality to be raised to Bb. (Actually, in my first attempts to play the tune I tried C tuning tuned down to steps).

I have made the tab in G tuning and prefers to play it in G, but if anyone wants to play along with Hinton’s recording you can put a capo on 3rd fret.

Beside the original recording by W.A. Hinton it has been recorded by Mike Seeger in the late 1960’s: https://www.youtube.com/watch?v=c_7L69qUwnU or

Mike Seeger plays Leather Breeches a little more regularly than Hinton: the crooked measures are there but he seems to repeat the different parts in a regular pattern A A A B2 C C B2’ D D B2 and repeat the same order from the beginning. He ends with the parts B1 and B2. He also seems to play some harmonics at the 12th fret in the D part.

There are also two modern videos that are worth to study:

If anyone want to learn this tune I would recommend to not follow Hinton’s complex structure. Make it more logical and easier to remember. I think Mike Seeger’s version has a good structure (see above). The tab below is based on Hinton’s recording and the order he played the different parts. When I play it I tend to play it more structured, for example: A A B2 C C B2 D D B2 C C B2 and so on) (where I treat the D part as an alternative A part), or play as Mike Seeger (see above).

There are also a lot of possibilities to play simple variations:

Good luck with the tune!

Great tune, W.A. Hinton doesn't play it exactly like the fiddlers do but he made it a great banjo tune. It explores similar melodic territory without being what the fiddlers play but a different, yet still recognizable as Leather Britches or Breeches. Even the names have differences in them.

Here's a TFIL tab from the late Bill Dillof. 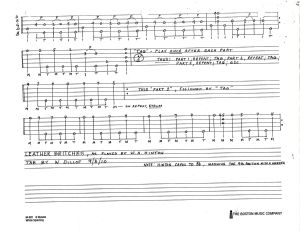 Leather Britches has always been a nemesis for me to get "right."  I tried several years ago, based on Francis O'Neill's Music of Ireland notation.  So hard!  For this week's "weird and fascinating" tune you've chosen, Jan, I arranged the one from Mike Seeger's recording and combined it with my older effort.

I hear in W.A. Hinton's Okeh recording what I think of as Leather Britches/Breeches, but simplified.  I appreciate his more when I hear in my head (as he plays) the one I consider more as the "original."  With that said, I'd be glad to hear anyone else's version of this tune however you play it.  On my iTunes I have several traditional players and in my ear each one is related to the other -- Brad Leftwich, Dan Gellert, Israel Welch, Lee Sexton, Stephen Wade, Earl Collins, and John Hatcher.  The one by W.A. is distinct, as you say, but it's part of the happy family of Leather Breeches/Britches.

Funny, but I always associate the tune with its namesake, also called lederhosen, as I used to hear in the backpacking store where one was able to buy them.

I seem to have an awful lot of versions of this in my own collection as well.  Besides being covered in some of the instruction books/collections and their accompanying sound files (Perlman, Levenson), I found these among my recordings:

Thanks to all for the usual great tabs and context.  They've been fun to play around with on this insanely hot Maryland afternoon.  Perfect day to soak up the AC and pck banjo.

Thanks everybody for your comments, and thanks Janet for a good recording. Hinton's version seems to be rather rare, so I am glad for anyone who tries it.

I think the ordinary Leather Britches is a good tune, so perhaps I (or someone else?) will try to make a TOTW of it some day. It seems to have history from Scotland. The original tune seems to be Lord MacDonald's Reel from the end of the 1700's.

quote:Originally posted by janolovI think the ordinary Leather Britches is a good tune, so perhaps I (or someone else?) will try to make a TOTW of it some day. It seems to have history from Scotland. The original tune seems to be Lord MacDonald's Reel from the end of the 1700's.

'Do you ever delete comments for jack-assery?' 2 hrs

'Is It True What They Say About Dixie' 3 hrs