Anybody know of a good source for replacement springs for a Gibson Mastertone with a ballbearing tone ring? I have heard they are difficult to find, but not impossible. Not sure of this, but I imagine that surely Gibson used readily available springs in their design, so wouldn't there be identical and/or similar springs available out there somewhere?

I don't know if this company has the right size springs or not but it's a place to start. Springs are found in the hardware section.

Disassemble the pot in the bath tub, with the drain & the curtain closed. Don't mix up the spacers in the bottom of the spring pockets! Due to limitations of woodworking machinery of the day, the depth of each spring pocket (hole) was inconsistent. Thus necessitating a custom thickness spacer for each spring pocket.

There were a lot of parts & labor hours that went into producing the "ball bearing" banjo. Actually ,there are no ball bearings in the design, only the steel balls for bearings, which are held to very tight tolerances, Die springs, not so much. Everything considered, it is little wonder they were only produced for a short time.

I have a 27 bb and I love it. For many years I couldn't get a decent tone. Thanks to threads I read here, I learned the bb set up. Jd is right about the spacers. I found that my balls were at different heights above the rim. Using a hole punch, you can punch out spacers from a business card and use these to bring the balls up to a little above the rim. Then using a drum dial, I set the head pressure uniformly around the head The result was amazing. From a dead sound to a full, sweet one. You'll be glad you went bb and not converted it to a different ring.

I have also been fool enough to take a few apart.

What ever you do, when you disassemble, do it on the floor and on a full spread out white sheet. Make sure you have a few dozen small baggies, cups or jar caps to hold the springs washers and balls. Number them. DO NOT turn the rim over once you remove the head and tone ring. If you do, your easy job has tuned into a few day job. Get some tweezers, take out the ball, the spring and how many washers are in the hole and put it in one numbered holder, then on to the next. As mentioned, each hole is a different depth. Some have one washer, some two, and maybe even one with three. You will find small pieces of Manila envelope sometimes.

A pain to set up, but once you do...amazing instruments.

The guy who originally had the job assembling BB banjo must have went insane doing the work. Probably the number one reason Gibson went with a one piece tone ring after the BB models.

Grainger and McMaster-Carr are two additional industrial suppliers that would have a good selection of compression springs.

My Brother (RIP) played & collected tenor banjos. One day he brought out a couple banjos I had not seen. One was a Ludwig (interesting pot/tone ring design), the other was a Gibson BB. Although Scott didn't care much for it's sound, his main gripe about the BB was the shorter than standard scale length, which messed up his (left hand) playing. I later discovered it was an early '25 Royal PT, having what's called the shotgun skirt. Scott warned me about changing the head on those banjos.

I tried to buy that BB several  times. Finally, Scott agreed to loan it to me, on a more or less, permanent basis. I had a 5 string neck built & played it for several years. Never had a complaint for lack of volume. What those banjos lack in volume, they make up for in rarity, especially having that shotgun skirt!

The BB eventually found its way home, inspiring Scott to try Scruggs style picking. I left the banjo & a set of picks with him, & no longer had to pack a banjo from L.A. to Indy & back. 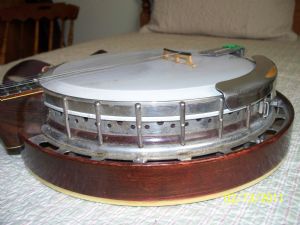 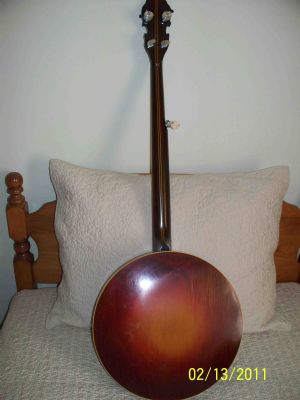 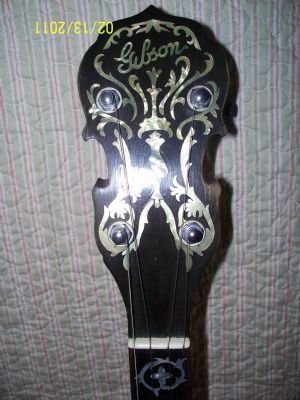 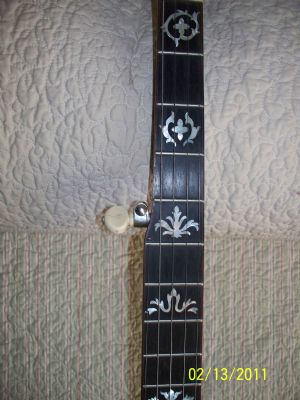 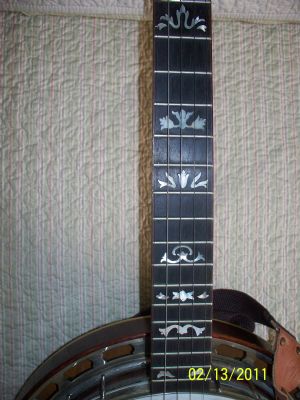 I saw a set of springs in the classifieds just this morning.

Must have sold. Can't find them.

FWIW: The intended use for those springs used in ball bearing banjos is on what is called the stripper plate on a die set. The stripper plate, as the name implies, strips either the part or the scrap, off the punches. Some of the punch presses have more than enough power to compress a gang of the heaviest springs as much as 1/3 their length.

The springs used on the ball bearing banjos are relatively small in comparison to the largest, and on the banjo, they are only compressed maybe .030 to .060" but, there are a lot of them.  :-)

So the ball bearings on Gibson banjos predated the Gibson Mastertone in 1925? I did not know that. Wasn't it one of Loar's ideas?