Hi all, I have been contemplating replacing the pip on my banjo for the 5th string as I notice that when I go to strike it with my thumb when playing Scruggs style, I sometimes miss it. I noticed when I first got the banjo, that the string was lower, so I figured maybe this was the way the previous owner liked it, but after reading some older posts here about replacing the pip, I wonder ... is the 5th string supposed to be lower than the other strings? I would think it should be the same height, but I'm all new to playing, so I knew all of you would know better.

I would think it should be the same height, but I'm all new to playing, so I knew all of you would know better.

Most fifth strings are 1 or 2 mm lower at the pip, and the same height at the bridge. If you look closely at your strings, you'll see this. The height difference where you play will be 1/4 or less what it is at the pip (1/2 mm or less), so I doubt that is what causes you to occasionally miss the fifth string.

Why does it start lower though? If the fret on my banjo ran all the way across, it would make sense that it be lower as it would be the fret that would act as the nut (like on a Deering where they use a railroad spike and fret), but my fret does not go in front of the 5th string at the 5th fret. The 6th fret does though. I would think that I would want the string to be at the same height as the other strings at the 5th fret.

Any ideas what may be causing me to miss the 5th string at times? Either that or I hit the head with the thumb pick. Maybe I just need to slow down and concentrate better?

Right, slow down and work on it, you'll get to where it isn't a problem.

Right, slow down and work on it, you'll get to where it isn't a problem.

It seems a lot lower at the pip then the other strings at the nut.

Regardless, I will slow down and keep working on why I am missing or hitting the head.

I'm not sure I understand what you mean Tom by "fret the 5th string". Do you mean that it starts on resting on the 5th string fret? My Pip is just to the side of the 5th fret (see photo attached) 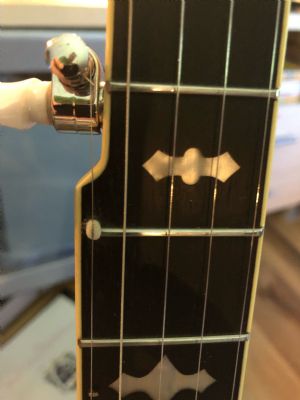 Why does it start lower though?

Some banjos -- Deering and original Stellings, for example -- are set up with the fifth string resting on the fifth fret, held in place with a railroad spike. So they start as low as possible.

Intonation is most accurate with a fifth string that starts from the fret. Or a pip that's in-line with the fret instead of behind it.

Anyway, as already mentioned, even with the fifth string laying on the fret, it's in the same plane as other strings at the bridge and infinitesimally lower where the pot meets the neck.

I have a 1912 Vega Whyte Laydie and the 5th string pip seem remarkably tall! All 5 strings are at the same level at the 5th fret.

On the other hand, Earl Scruggs recommended in his instruction book that you remove the 5th string pip and put a little railroad spike/nail (like for 5th string capoing) behind the 5th fret instead, for the exact reason mentioned above of truer intonation of the 5th string when you fret it or capo it.

So there is no "rule", only preference of the builder, or the player.

It seems most banjos I see have the 5th string height kind of "in the middle", a bit lower than the other 4 strings, but not all the way down to resting on the fret itself.

When I was starting out I had a terrible habit of banging on the head with my thumb pick every time I hit the 5th string. It literally took a few years to train myself out of that awful habit. (I was about 12 years old at the time.) Hang in there!

I'm not sure I understand what you mean Tom by "fret the 5th string".

He means play fretted notes on the 5th string. Not just play it open.

A 5th string that's lower than the 4th string can be a little easier to fret since for some players a lot of their 5th string fretting is wrapping the thumb.

Thanks Ken... that makes sense then with that explanation. I've not had to fret the 5th string yet, but I also am just learning, so I'm sure that will happen eventually, and if I have to use the thump, that makes a lot of sense to have it lower.

Fretting 5th string comes up a lot in melodic style. In Scruggs style, thumbing the 5th string to add color to a backup chord is very common.

But some players rarely fret the fifth string.

On my modern banjo everything works just as Dick described. The pip is tall enough to make all strings at the same level. It's very comfortable for me but I don't use spikes or fifth string capo. 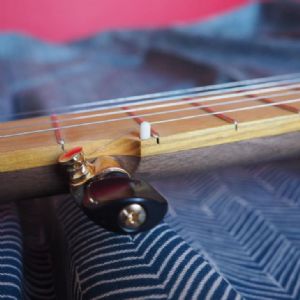 I've shown this before, but it's a workable solution to the problem at hand—cut a ball-string  bead in half and put it over the 5th fret,which makes the string the same height as the others and no buzzing on the spikes. 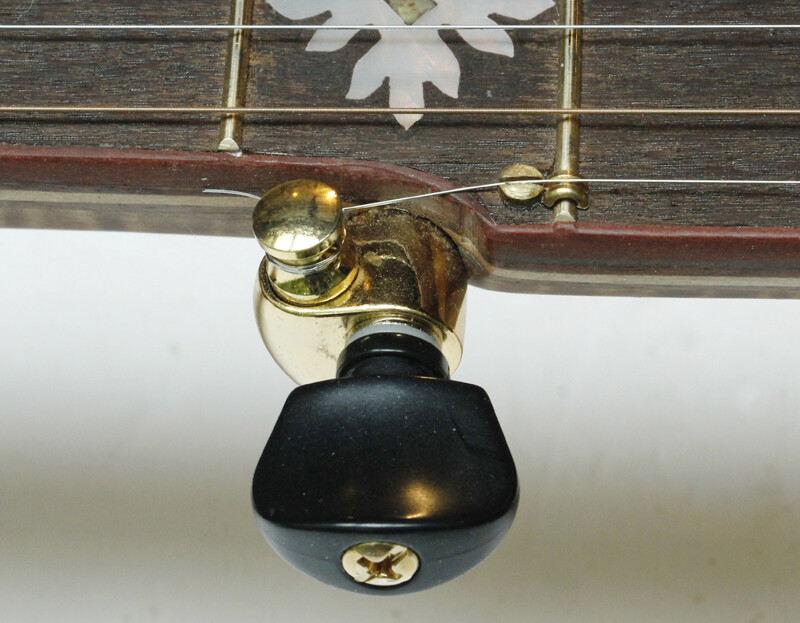 Thanks Ken... that would work great if I had a fret there, but I don't. My fret stop just before it gets to the 5th string.

One question I do have though is what exactly is a ball string? Is that the end of a guitar string?