did KKs have serial numbers like gibsons or not ? if so were they different series from standard gibson numbers ?

Generally, off-brand Gibsons had factory order numbers but not actual serials. Someone can correct me if I'm wrong, but I assume that's the same for the Kel Kroydons.

some do have factory order numbers, some do not. the ones that i have seen numbers on are usually stamped on the back of the headstock.

they had the same numbering convention as other gibson insturments at the time, sometimes you find kel kroydens in the same batches as regular gibsons.

also on some non stamped kks (and other gibsons) youll see the batch number written on pencil on the bottom of the neck.

did KKs have serial numbers like gibsons or not ? if so were they different series from standard gibson numbers ?

My KK-11 has the serial number 9781-78 stamped on the inside rim in the same location as most pre-war Gibson banjos.

That's a FON, not a serial. 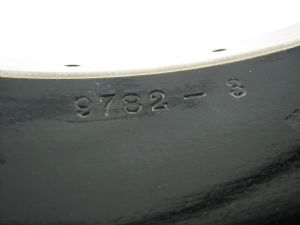 well maybe i should have worded it as do they have factory order numbers like gibsons do....

My 31 KK-11 has the FON written in pencil on inside of the heel of the original neck where it meets the pot. Nothing on the rim or inside the resonator.

As you already know gibson is not usually absolute on anything!.........But in my experience with these style 11s and KKS and SS Stewarts, most of the time if it was gonna be a Kel or SS or the like they would not put a gibson sticker in the rim,,,,,,but on most style 11s I have seen or converted, they have a Gibson sticker in them.......My thoughts on this are when they were using a different name other than Gibson on peg head they would omit the Gibson sticker for lack of confusion........although they were all the same banjo , assembled in Kalamazoo and sold from there........If yours does not have a sticker I would think it came from Gibson as a KK tenor......BTW....hope your are getting along ok buddy!

Mine was a Truett PB-11 no number, no sticker. I gave the neck to Bill Sullivan (because he was a good guy and he said he would like it) I don't remember if it had any numbers in pencil on the neck stump. Who cares?.. nobody is making fake 11's, it is too hard to do. :)