So I found this history of the guitar going back to the 1400s online.

I'm just wondering if anyone know much about the history of the Akonting and related instruments going back further?

I do know that various kinds 3 stringed lutes with a stretched skin head over a pot of somekind for a resonating chamber is found throughout Asia for thousands of years.

And also musically why 3 strings? Why not a bunch like guitar, lute, harp, and other similar stringed instruments?

Also I've noticed most of these akontings don't have tuning pegs or a finger board. How are they tuned and fretted me?

I ask purely out of curiosity. 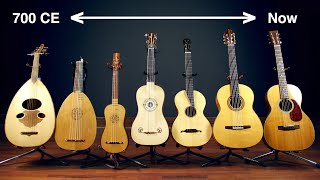 I had a chance to play an akonting a few years ago at a Daniel Jatta concert/lecture. As far as I could make out the strings are tied tightly around the neck and stretched and tied at the tailpiece end (no actual tailpiece - they are tied round the stick that protrudes beyond the body). The 2 melody strings are of different lengths, one tied further back on the neck. I'd guess that absolute pitch isn't as important as long as they have sort of the right relationship (a 5th ?) and are tight enough to produce a decent sound.
With only 2 short strings the round stick that forms the neck isn't hard to "fret". Banjos didn't have frets until about 150 years ago - and fretless banjos coexisted for some time after that. Frets are a fairly late introduction. Lutes have frets but the Arabic oud that they descend from doesn't. Frets were an optional extra - being formed from gut tied around the neck rather than permanent metal inserts. Lute and viol players who want to be authentic still do it that way.

If you play clawhammer it's pretty easy to sound like you know what you are doing on an akonting. I got a recognisable version of Old Joe Clarke out of it.