Can anyone ID this aluminum looking banjo rim? I searched the web and could not find one like it. 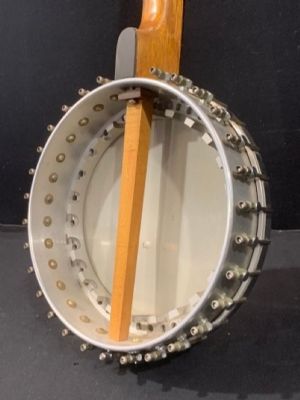 Is there a name on the peghead ? show the neck-rest of the banjo.
"Hex" shoes suggest an import, SAGA, and someone added other parts to the rim. Could be a custom made from parts from all over.

Ode style A rim or possibly a Muse style 1, also made by Ode.  See page 5 of the catalog on the Ome website.

If you enlarge the picture of the rim from the OP, you can see thats it not Ode, Saga, Gariepy, or Stew-Mac.

The rim that is being asked about, has a scalloped inner ring with semi-circular cut-outs that don't look like any of the rims mentioned above.

I will admit that of the rims I mentioned above, I've never seen a real live Gariepy in person, but the rim being discussed in this thread doesn't look the pictures of Gariepy's that are on-line

Thanks for the input fellows. Here's a few more pics. I suppose it could be a kit or a home made instrument BUT can someone 'home made' a rim like this without casting or a milling machine? Takes a high skill set and specialized machinery for this. I would doubt that the rim is a one-off. note: Check 'closet case' post in my vega nut profile for a close up photo of my Gariepy Style 1 rim. 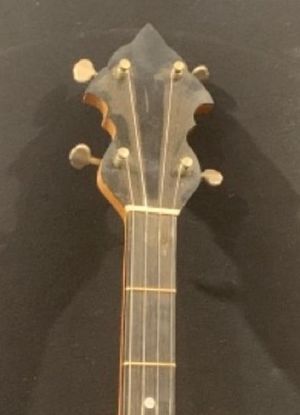 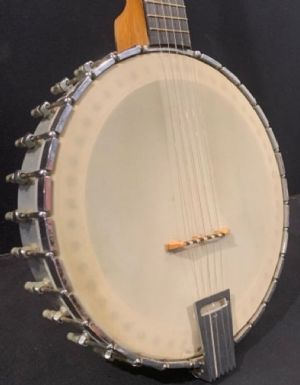 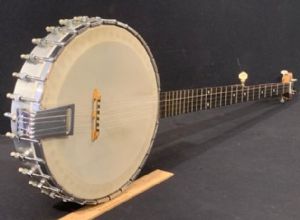 That is a fascinating piece of metal. Any possibility it is repurposed from something else, like an electric motor or generator?

Close up Photo of the inside rim.
The tailpiece is a 6 string & looks like ODE. What is the logo ?
Yea , could a ODE prototype or one-off

I once had a Gariepy with an aluminum rim, and it certainly was not configured like the one in the photo.

The photo with the 6 string tailpiece, when enlarged, does seem to suggest 'ODE' but it's a little blurry and hard to make a positive ID. It is also different than a later ODE logo which was more stylized. Very mysterious indeed.

Here's a closer up photo of the tailpiece. 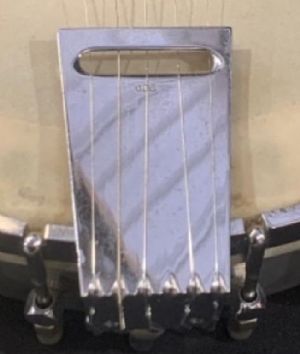 The pot has 28 hooks which is similar to Ode. Maybe a 5-string neck was added later given the tailpiece is for a guitar banjo.

Try giving Chuck Ogsbury a call. Here is an excerpt from a BNL interview.

CO: About 1961, I hired one of my best friends, Dave Walden, to help with production. Dave was a musician, and he got into the whole ting. Together, we set up our first real shop in a 900 square foot building in North Boulder. We then started the second production run which included some standard scale length 5-string banjos, 3 frets shorter than the long neck styles. I also experimented with arch-top integral tone rings where the tone ring was cast into the wall of the aluminum rim. This cut back on unwanted overtones and gave a cleaner response. There were many experiments with the aluminum rim. The final version evolved into a closed chamber system, similar to the Gibson arch-top. It was again, a one-piece cast unit