Not sure if this is the right forum, as Iâm not actually looking for a tab. I like the Emmylou Harris recording of Christmas Timeâs a Comin. I believe she is singing it in the key of B. I also like the banjo break, and wonder if any BHO members know what tuning the banjo player is using. It doesnât seem to be standard gDGBD. The group with which I play sings the song in C, and I have a passable break in standard tuning, but I would like something closer to the Emmylou recording, capoed to adapt. I have tried open C to approximate the break 2 frets up, but that doesn't seem to be it either. Hoping someone with a better ear can help.

Thanks in advance, and seasonâs greetings.

If it is in the key of B I would guess that it is ordinary G tuning capo 4. If it is a drop C tuning  (gCGBD) it would be tuned one step below to f# BF#A#D#) but I don't think the banjo is played in that tuning.

Thanks janolov. I agree that drop C and open C donât match the recording, even tuned down. And the overall tone sounds lower than a simple capo up to B in standard tuning. Which is why it makes me think it is some odder tuning being used.

Look up Dailey and Vincent's version of it on YouTube. They sing it in E which is the traditional key. But pay attention to the banjo player when he takes a break. He is in standard G tuning capoed on the 4th fret but plays in C position. If your band does this in C you can use the same techniques he does without the capo.
Or you can figure out the break on Emmylou's version and capo one fret higher.

Sounds like Emmy is singing it in the key of B. Ricky Skaggs is playing the banjo and tuned to G tuning capoed up 4 frets to the key of B...Jack

Sounds like Emmy is singing it in the key of B. Ricky Skaggs is playing the banjo and tuned to G tuning capoed up 4 frets to the key of B...Jack

Jack Baker: I guess you are right, though for some reason I hadnât thought so. I have a similar standard-tuning break I do in C by capoing at 5. Also one using C-shape uncapoed down at the nut, but capoed one sounds better to me.

Thanks to all of you.

Listen to the open 5th string Ricky Skaggs is playing. Capo to the 4th fret, key of B, G tuning and it will sound correct. It sounds to me like Ricky hammers the 2nd string to start off the break...

No way. He playing with his fingers as in Bluegrass...Jack

I assume we are all listening to the 1979 recording. What a great performance, and Skaggs' banjo break is awesome, tasteful and clean. It's so clean, I get why Jack is hearing fingerpicking, but after slowing it down, I think chuckv97 is correct, I think it's clawhammer. I believe the banjo is in open G tuning, with the capo on the 4th fret, but the 5th string has not been capoed or tuned up to B, it's been dropped down to F# to match the actual pitch of the 1st string. Attached below is a recording of just the banjo break, slowed down to 30%. If you listen close, you'll hear a few clawhammer like gentle multi-string downstrokes. Here's what I am hearing Skaggs doing: 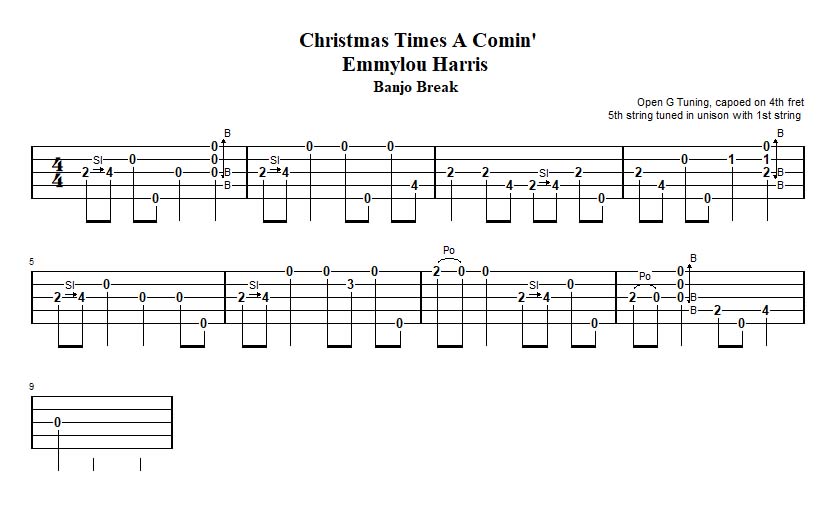 Some of the notes are muted, so it's hard to be sure, but I think this is pretty close.  Listen to the slowed down break below, and you won't ever hear the high B, the note you would expect if the 5th string were capoed in its usual place in the tuning.

Thanks, Don,,, I was hoping I wasn’t hearing things. I had always thought that Ricky played only clawhammer.

here's an interesting blast from yonder past,, when Ricky was with JD, demonstrating CH vs. Scruggs style

Ha, well blows me down. Thanks Don and Chuck for getting this right...Ricky is so talented at anything he touches and his ultra clean oldtime playing fooled me...Jack  p.s. I must admit that my Bluegrass ear is far better than my Clawhammer ear....Rhonda Vincent's version is still my favorite version of this tune...

Thank you, Jack and Chuck. I realize that Gill, the original OP, was not actually looking for a tab, but I discovered I couldn't decide on the tuning either without actually mapping out what Skaggs was playing. I also noticed that I forgot to link to the slowed down version of the banjo break, which you will find here:

Don,
Your tab is very accurate to my ear. Your audio link nails it... Muchas...Jack

No, Don, I did not ask for a tab, but I âm pleased that you took the trouble to provide one. I donât play clawhammer style (wish I did, really like the rhythm and sound), but your tab confirms that the Scruggs-style break I doâopen G, capo at 5, unchanged 5th stringâis quite similar, except a half-step up.

Merry Christmas all, and thank you.

I think Don's tab is easy to apply on three-finger. Start with palying note-by-note with the fingers and instead of the brushes in the tab you can play pinches. After a while you can develop the picking pattern to more Scruggsy style if you want.

Hmm, I hear this song with the instruments tuned down a half step so as to play out of the key of C. The split second open B string on the banjo solo along with the mandolin playing an open low G (which would not be possible in the key of B) plus the existence of the hammered dulcimer in the arrangement brought me to that conclusion. Here's my tab and mp3 at 50%.

p.s. System not letting me upload

Hmm, I hear this song with the instruments tuned down a half step so as to play out of the key of C. The split second open B string on the banjo solo along with the mandolin playing an open low G (which would not be possible in the key of B) plus the existence of the hammered dulcimer in the arrangement brought me to that conclusion. Here's my tab and mp3 at 50%.

p.s. System not letting me upload

I think you're right.  I couldn' figure out how he played the particular notes so smoothly in G tuning up on the 4th fret.  So he's not superman after all!

Here they are, figured out it was the comma in the title.

So strange. Both tabs sound and look great but how did Ricky get that incredible tone with no picks on?...I know Ricky is known for his clawhammer style whenever he did play banjo but this recording does not sound like bare fingers playing it--that is my only ? qvestion....Jack  p.s. I've never heard clawhammer have that timing that Ricky has in this recording...

Okay, Rick, I'm certain you have the tuning right, but I don't think the tab is right. And I partly agree with Jack, too, Skaggs is getting astonishingly clear tone, and also employs some syncopation that is not often heard in clawhammer.  But as crisp as Skaggs sounds, I am still virtually certain he is clawhammering, or maybe two finger index lead up-picking, which would look the same in tab, but he is not playing three finger style.  I still think clawhammer, though, there are enough muted notes that I don't think he is up-picking.  Jack was absolutely right when he said above that the opening notes were a hammer on. The first notes are a hammer, from 0 to 2 on the 1st string, but the same notes are gotten with a slide in the next measure, from 3 to 5 on the 2nd string.  Listen again to the slowed down recording, I've linked to it again below. I've also corrected a couple of notes I got wrong, pitch wise, the first time through.  Looked at this way, it's actually pretty easy. 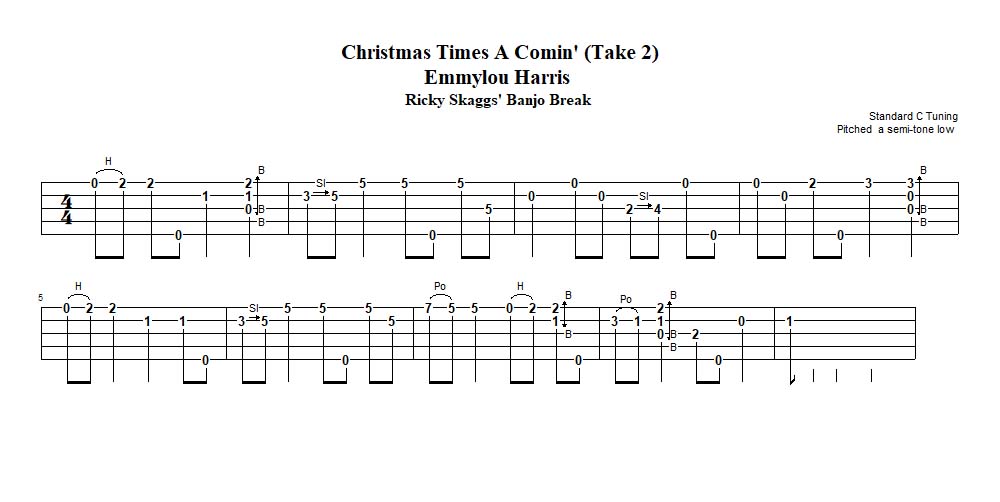 Don,
Yeah, one tricky song for sure. Your new tab is on the money to my ears...Jack

It's clean because there are no brushes, they're mandolin chops.

Found this interesting video from 1975 on YouTube, featuring a very young Skaggs demonstrating the clawhammer style to the rest of the band, J.D. Crowe and the New South. When the time comes to demonstrate bluegrass style, he hands the banjo off to Crowe.

Has anyone seen or heard Ricky Skaggs playing finger style on any instrument? When playing banjo he seems to clawhammer, when playing guitar he uses a flatpick, also when playing mandolin. And when fiddling he uses the bow. But he never seems to use his fingers.