Ralph Stanley One drop of water

Looking for a tab for one drop of water by Ralph Stanley. Would greatly appreciate someone helping out! Thanks

Ill do it later today unless someone beats me to it. Its very simple , even for ralph.

Here's tab as requested. Since the intro is the only thing Ralph took a break on i added some simple ralph style backup for the verse. i usually like to start the chord progressions on the first measure of the line so each 4 measure line begins on the first measure of each line, but the intro screwed that up. So in order to avoid a page two (lazy me) the first measure of each line actually begins on measure three as indicated where i have "verse" marked. one thing i did was to throw in two 1/2 note choke licks, combined with a pinch. Just hold each choke for 2 beats and you're good. if you listen to Ralphs second break on Going to Georgia he does the exact same thing.
Have fun 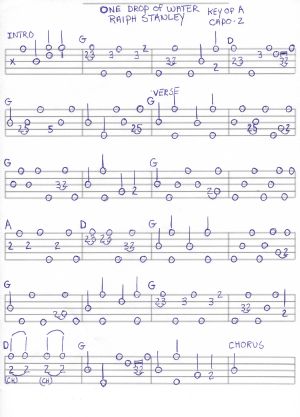 One Drop of Water/Ralph Stanley

'Banjo outside it's comfort zone?' 56 min