Picked a pretty straightforward old tune for this week, but one that I always enjoy playing, a good old-time trance tune that is perfect for square dances and late night jams... Joe & Odell Thompson's "Old Corn Liquor."

The story of Joe and Odell Thompson is pretty well known due to their mentoring of the Carolina Chocolate Drops and the exposure of their music by the CCD and noted musicologist Kip Lornell, along with banjoist and banjo researcher Bob Carlin, who produced their seminal CD "Family Tradition."

The story of Joe and his brother Odell is an interesting one, and instead of me writing about it, I would direct you HERE to a short documentary of Joe produced by Iris Thompson Chapman who was a daughter of Joe Thompson's first cousin George Thompson. It's a wonderful film, and well worth the watch.

Joe and his brother Odell were one of the last surviving examples of the Black string band tradition, in the vein of the Tennessee Chocolate Drops (with Louie Bluie), Andrew & Jim Baxter, Gribble, Lusk, York, and many others, a rich tradition that existed in the Southern Mountains and NC Piedmont prior to WWII, mixing Black banjo songs passed down from before the Civil War with Scots-Irish and English fiddle tunes, and which pretty much died out except for isolated pockets after the war.

Thompson was born in Orange County, North Carolina on December 9, 1918. His father John, a fiddler, and uncle Walter, a banjo player, performed at local square dances and corn shuckings. At seven years-old, when Thompson took up the fiddle himself, he closely observed his father's techniques which were rooted in old-time African tradition. He joined his father and uncle for performances, and later formed his own string band with his older brother Nate and cousin Odell, both of whom were banjo players. Much of the band's repertoire consisted of family songs passed down since before the American Civil War, including "Hook and Line" and "Cindy Gal".

After serving in a segregated unit during the Second World War and as the popularity for traditional string band music waned, Thompson stopped playing the fiddle to work in a furniture factory as a rip saw operator for 28 years. In 1973, musicologist Kip Lornell, then a recent college graduate, heard rumors about Joe and Odell Thompson's mastery of the old-time style, and urged the duo to make a comeback. Thompson and Odell began performing as the New String Band Duo across the United States and abroad, becoming popular fixtures at folk festivals. Among the notable gigs the duo played at included Carnegie Hall, the National Folk Festival, the Festival of American Fiddle Tunes, and the Tennessee Banjo Institute.

In 1989, they recorded the studio album Old-Time Music from the North Carolina Piedmont for the Global Village record label. The duo was awarded the North Carolina Folk Heritage Award in 1991 for preserving black folk music traditions. When Odell died in a car accident in 1994, Thompson pondered quitting music altogether, but recorded the solo album Family Traditions, released on Rounder Records in 1999. A stroke Thompson suffered in 2001 severely impaired the use of his left arm, but after extensive rehabilitation, he returned to playing. Although he lamented at the lack of interest for old-time music, in 2005 he began mentoring the Carolina Chocolate Drops, a modern-day African American string band. He was a recipient of a 2007 National Heritage Fellowship awarded by the National Endowment for the Arts, which is the United States government's highest honor in the folk and traditional arts.[7] In the same year, he performed at the Kennedy Center for the Performing Arts in Washington, D.C

There's a great biographical article from the Greensboro News & Record HERE, along with another interview from the NEA HERE. Joe & Odell were indeed National treasures.

Picked this tune because I think it's a great tune to just kind of "riff" on, and it's a lot of fun to play. I've tried to incorporate some different stuff in my adaptation of the tune to show some of the variations you can work into a tune that has a pretty simple melody, so a lot of "stuff" in there that I probably wouldn't include if I was playing more straightforward for a dance.

There are a ton of versions on YouTube, but my favorite one is Here,  Joe and Odell performing "Old Corn Liquor" in 1988, before Odell's untimely death... awesome and powerful stuff.

Hope you enjoy the tune and give it a whirl, take care & have a great weekend...

Good one, RG, and nicely played. You gave us lots of history to read and research and I appreciate learning more about Joe and Odell.

A year ago Tampa E on Instagram posted Old Corn Liquor as a TOTW, and I worked it out like she did, on a gourd banjo. Tampa is a delight to hear and is especially interested in Black old-time music. She recently found out she's related to Dink Roberts. I don't know whether Dink knew Joe and Odell just because they were both from North Carolina at around the same time period, but they both recorded Old Corn Liquor which appears on the CD "Black Banjo Songsters." Both versions have lyrics.  I arranged from the Thompson's recording. 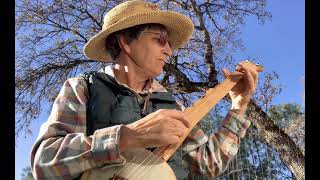 Here is the tune, transcribed from Michael Ismerio's fiddle tutorial videos (which are pretty good values)...He teaches by ear, so transcription is my own.
https://www.hangoutstorage.com/banjohangout.org/storage/photos/large/14/14718-194844122021.jpg

Great tune. I had a go it here - I like this banjo tuned low so this is played somewhere around E 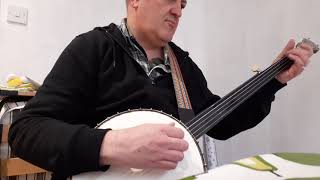 Here is the tune, transcribed from Michael Ismerio's fiddle tutorial videos (which are pretty good values)...He teaches by ear, so transcription is my own.
https://www.hangoutstorage.com/banjohangout.org/storage/photos/large/14/14718-194844122021.jpg

Well, since you brought up some music theory:

I have earlier listened a lot to to Bob Carlin's version (see link in RG's post) and he seems to play a 2-3 hammer on the third string instead of the 2-4 slide Janet does, and what is notated in the fiddle transcription in your link. I think it is too easy just to call it pentatonic - I think this tune, in its origin, represents more of subtile music theory than just penta-tonic, with a lot of micro-tones (tones in between the usual tones in the diatonic scale).

Oh yes, that is an excellent clarification!  Frets? Who needs them!

Fun tune to pick! love it. Here is a version I recorded a few years back.
Larry 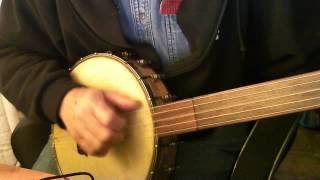 Janet, Mark and Larry, sure enjoyed your versions, thanks for posting! Great stuff! To my ears. Odell's playing was fretless based and your versions show how cool this tune is played with all those notes in between. I'll post a fiddle version when I get around to getting my fiddle cross tuned, it's as much fun on fiddle as it is banjo.

'Banjo outside it's comfort zone?' 22 min