Just received my latest toy, a Clifford Essex Special XX five string, needs a bit of TLC. The head is a puzzle, natural skin in great condition, but I can`t see how it could ever have been tensioned, there appears to be no flesh hoop and the skin seems to be wrapped around the tone ring somehow ? I guess I`ll find out as I dismantle it. From my online reading it would seem to be early 1900`s, there was a similar one listed as sold on Banjobuyer site, from France,that mentions the date 1908, I`m not sure how that was arrived at. I`d love to get some response and suggestions from you guys.
I`ll now try to attach some pics :-)

I`m having a bit of a problem uploading pics, advice ? 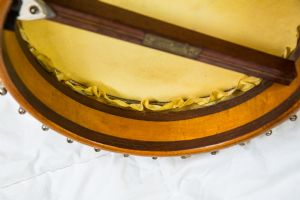 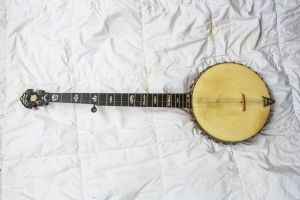 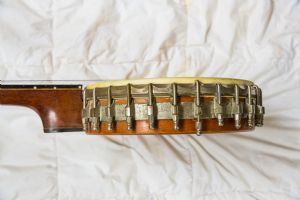 I have never seen a head installed in such a fashion.

Looking at BMG magazine covers, the tailpiece design appeared to change in 1922. This is from BMG 1910. 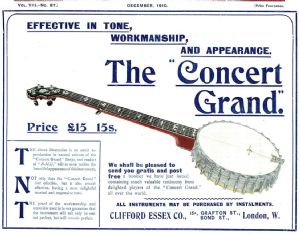 The "Professional" tailpiece (the lyre shape that screws to the stretcher hoop or "bezel" with two screws) was first offered at the same time as the new "Professional" model banjo-- February 1922 (though in the January 1922 issue they tease the Professional Banjo).

So we can rule out after that, more or less.

What I don't know is when CE stopped using "Special XX" and started using "Concert Grand". We are missing (more or less) the BMG issues from the start in 1903 to 1912 and the earliest issue we have access to that uses "Concert Grand" is December of 1910.

Over the short time I have been interested in British banjos I have discovered that there is a lot of bad info and some total making up of facts for some reason. For a long time there has been this idea that the address on the tags can be used for dates-- this has been proven false as it seems they used up old tags after moves. Considering that the majority of their banjos were built for them by other shops, the tags seem to be mix and match.

CE banjos should be pretty easy to date within a decade. I mean, they published a monthly magazine for their entire existence that are jammed with details. But it was not until fairly recently that Ian at the Classic Banjo Ning website made available a good chunk of BMGs (I am pleased to be one of the contributors).

I think the best we can currently date something like this is from 1903 to 1910. We know that very early on CE imported banjos made by Vega, this is not one of those.

There are some things that concern me about yours. The way the head is attached terrifies me. The ring is a knockoff of the Electric Truss assembly used in the Fairbanks/Vega Whyte Laydie which is three parts. The Ring (or "wire" as it was called by Vega), the Truss (scalloped part) and both "spun with a ban of nickel silver". It is the "spun" cladding that I am worried about. The way the head is jammed through the ring and truss makes me think the cladding is missing or damaged.

The metal work on yours is very tarnished and worn, something not usually seen on CE banjos (excluding the very early Weaver built Metal Hoop Specials). Usually the plating holds up very well as the metal work was overall extremely good.

The condition of the metal would make me worry that it was subjected to extreme humidity for a long period of time.

I am interested in hearing how you make out when you get it disassembled.

Do check out out classic-banjo.ning.com/ and learn about the great music that this was built to play.

Hi guys,
Nick, the banjo appears to be the same as the one in that ad, so it may be assumed to at least predate 1910. The tailpiece is the original, not screwed to the tension band.
Joel, Alvin, thanks for your comments all informative and agreeing with my estimate, 1903 to 1910.
That head !!!!!
After disassembly I can tell you that all the parts are there, just not in the right order :-)
The head had been placed over the ring and spun cladding (or skirt), folded up the inside of the skirt and then the scalloped truss has been inserted, trapping the skin between the truss and the ring, than installed onto the rim. The flesh ring has then been placed over the assembly followed by the tension ring. So after "tightening", the head must have been about as tight as the skin on a baked rice pudding and less useful :-)
The brightware certainly does not live up to its name, I know the banjo was not stored in a case although I believe there was a hand sewn soft cover of some sort which did not come with the banjo.
I managed to remove the skin intact and believe there is at least a chance of re-using it, properly installed of course.
I`ll post updates as possible. Thanks guys.

I own a Special XX and three Concert Grands, two apparently from the 20s and one from the 30s. I play clawhammer, and one of the 20s CGs has been my main and favorite player since I bought it in 1969.